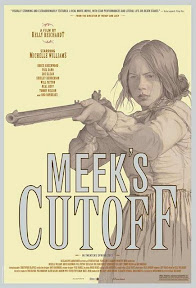 At the Spectrum Theater in Albany this afternoon a scene was repeated that has played out in arthouses across the country. The end credits had just begun for Kelly Reichardt's western, and from the small crowd came exclamations like, "That's it?" "It's over?" "That's the end?" "You're kidding!" and "I want my money back!" That last one may have been meant as a joke, but I think there was some sincere feeling behind it. From what I've heard, these responses are all too typical to Reichardt's laconic, revisionist western. I happen to think they're unfair, but then again, I think Reichardt was asking for it. She's made a rigorously ambitious film -- I could call it the best western ever made by a woman but there isn't enough competition for that to mean much -- but its ambition is too demanding for audiences, even in arthouses, who expect the comforts of conventional drama. To explain the problem, I'll have to spoil the ending, though some will ask what's to spoil -- Meek's Cutoff doesn't even have an ending!

Reichardt's film is about a little wagon train of three families on its way to the contested Oregon territory in 1846. Their guide is the ironically named Stephen Meek (Bruce Greenwood), your typical buckskin boaster, but with little to back up his big words. They're behind schedule, apparently lost and increasingly distrustful of Meek, who insists that they have to depend on him to survive. As they slowly run out of water they begin to think of other options. An extreme option becomes available when Meek captures an Indian who's been stalking the party. Meek, an Indian hater, wants to kill the stalker on the spot, but the menfolk -- the women have no say in the matter -- think that the Indian's healthy appearance means that he has access to a nearby water supply. They vote to keep him alive in the hope of persuading him, despite an impenetrable language barrier, to lead them to water. It's possible, however, that their hostile prisoner might lead them to starvation out of spite, he presumably not valuing even his own life the way white people do. The more the party seems to depend on the Indian, at least for direction, the more Meek's power is threatened, and the more one woman of the party, Emily Tetherow (Michelle Williams) asserts herself as a matter of personal and collective survival. When Meek finally decides to kill the Indian, it's Emily who draws a bead on him and forces him to stand down. When the party finds a tree growing that appears to prove that water is near, they face a choice between continuing to follow the Indian, whose mutterings Emily interprets as proving that they're on the right track, and going another way. The film closes with a shot of the Indian walking away, without showing us whether the party will actually follow him. Cue outrage.

Obviously, Kelly Reichardt felt that she'd said all she needed to, so why do so many people seem to disagree? The simple answer is that they want a resolution to the story. They want to know if the wagon train follows the Indian or not and makes it to their destination or not. Without those answers, the film seems to them to have merely stopped rather than ended. But while audiences object that the film didn't end properly, no one objects on the ground that the film didn't begin properly. It opens and closes in medias res. We're never formally introduced to the characters and we don't see the beginning of their journey or how they hooked up with Meek. That's not so abnormal, though; we're more accustomed to stories opening in the middle, and it doesn't bother us as long as the story has a clear close. Reichardt's closing is unclear to many people because it doesn't show us the end of the journey. As the old saw says, however, the journey, not the destination, matters, and Reichardt clearly felt that she'd made her point during the journey. If so, what was the point?

When I first heard about Meek's Cutoff my impression was that it was to be a kind of feminist western, and it can still be seen that way. The women's exclusion from decision making or even from necessary information is made quite clear, and feminists can certainly make a heroine out of Emily Hetherow for standing up to Meek and, by claiming to interpret the Indian's words, asserting leadership of the wagon train. But while the subordination of women is part of the immediate context, the larger themes of the picture are more broadly relevant. The challenge for all the characters in the story, male and female, is what to do with incomplete information. The women know mostly what the men choose to tell them and the men know mostly what Meek tells them, while the Indian is presumed to have information but can't be understood by anyone. The challenge of incomplete information becomes an issue of trust as well. Why has Meek led the party astray? Is he stupid or insane -- or is it a conspiracy? One character speculates that he might have been paid by the British to keep settlers out of Oregon to prevent it "going American." Once I heard that, Meek's Cutoff suddenly leaped into contemporary relevance, becoming a kind of allegory for American history in general. I got the same impression from the characters' debates over the Indian, whether he could be trusted, whether he was capable of fellow feeling based on common needs. Reichardt is admirably ambiguous about the Indian; she wants us to be uncertain of his motives all the way to the end -- and beyond. I don't think he's meant to symbolize "the Other" or anything more than the inevitable uncertainty at the heart of any collective endeavor. Uncertainty itself is the subject of the movie, which is probably why it must end on a note of uncertainty. We can never expect to be able to act on perfect information all or even most of the time, but we still have to act. For Reichardt, apparently, the best way to make that point is to trap the audience in the moment of decision instead of vindicating any choice as the right one or condemning another as the wrong one. That seems to be her way of saying that the decisions facing Emily and the rest of the party are the kinds of decisions we all have to make, often on no more or no better information than the pioneers have. And that seems like a timely message for Americans in 2011, so maybe it's no surprise that they've largely rejected this film.

They're missing a film of primal austerity, a ground-level, walking-paced retelling of the American pioneer epic that gives the old saga fresh immediacy. In its attention to mundane detail and its resistance to melodrama, Meek's Cutoff strikes me as a kind of neorealist western, or a western on the neo-neorealist model of Iranian cinema, a resemblance at least partly based on the enforcedly modest dress of the American women. But while "austere" is the word most often used to describe Reichardt's movie, it's often quite striking on the pictorial level, thanks to Reichardt and cinematographer Chris Blauvelt. The director mostly eschews the godlike panoramas and craggy expressionism of classical Fifties westerns, but she still makes the most of her landscapes and has an impeccable sense of proportion when showing men, women, wagons and oxen crossing the screen. While hers isn't the sort of script that really showcases actors, Michelle Williams clearly stands out as a woman in whom necessity slowly awakens a heightened sense of responsibility and assertiveness that would make Emily an American heroine if only we were sure that she'd succeed. As Meek, Bruce Greenwood gives an archetypal performance that's really the closest the film comes to stereotyping. He's perhaps too shallow, too easily set up as a foil for Emily, but that's also because Reichardt resists conventional character arcs that would explain, redeem or punish characters. Meek appears to be a fool, but why that is is one of the things we're left uncertain about, as the other characters are. In a for-all-intents-and-purposes wordless role, Rod Rondeaux impresses as the Indian simply by not giving anything away. He often acts like he's in his own movie (in another language) coincidental with the pioneers', but that's probably exactly how the Indian's role should be played.

I could go on listing the movie's virtues, but they'll all go for nought for many people without closure. I'm sure a lot of my disgruntled fellow spectators at the Spectrum liked the film up to the moment the credits started, at which point the film was destroyed. So is closure everything? I'm reluctant to concede the point. If cinema is something other than literature or theater, as should be self-evident, then movies can't be judged exclusively by narrative standards derived from books or plays. But before I get too defensive, I ought to stress that Meek's Cutoff isn't exactly avant-garde. It does have a narrative, and a linear one at that, but the narrative services a theme that doesn't need narrative closure to be stated completely, and might well have been undermined by an insistence on such closure. The film is thematically complete as is, and the finished work is the best western of 2010 (with all due respect to the Coen brothers) and one of the best of this generation.

I don't usually include the trailers for current films, but since a lot of people won't be seeing this one until the DVD comes out, here's a hint at what you're missing, as uploaded to YouTube by MovieTrailersForAll.

Samuel, I'm dying to see the film. That's the curse of living in a small town like Kalamazoo in the midwest. We get relatively few art films if any...so I must make a long trip or wait. Anyway, I love Reichardt's aesthetic and Michelle Williams is my favorite actress. I think this is going to be incredible once I finally see it. Do you think it's better than Wendy and Lucy or hard to compare?

Jonny, it's hard for me to compare because I haven't seen Wendy and Lucy, though my local library has a copy of it for me to watch fairly soon. Meek's interested me primarily because it was a western, but Reichardt's visual sense is so strong that I'm ready to check out her previous work.