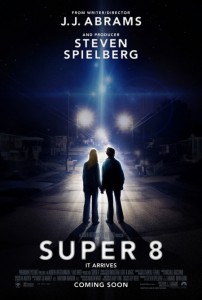 Think of a pastiche as a remake of a film that doesn't actually exist. J.J. Abrams's homage -- to use a euphemism -- to Steven Spielberg is just such a movie. For audiences of a certain age, it's impossible not to feel that you've seen it before, and that seems to be the point of the project. Abrams is out to fill an invisible hole in Spielberg's filmography, with the master's approval and the Amblin Entertainment seal. It's an imitation of the director, not a commentary on his work, though Abrams tries to distinguish Super 8 with variations on Spielberg themes. So a young hero has to deal with an absent mother rather than an absent father, and an alien is not quite benevolent. But in all the superficial essentials it's recognizably a Spielberg film (or a Spielberg production) of a certain age, as well as a nostalgic visit to 1979 and its popular music. Moreover, it's self-consciously a Spielberg pastiche or homage. Indeed, Super 8 is nothing if not self-conscious about itself. A film about juvenile filmmakers that is also a Spielberg pastiche could not be other than self-conscious, and its overt self-consciousness about being a Spielberg pastiche and a film about the wonder of moviemaking is part of the big dare that defines the whole project. Abrams knows that he's made a self-conscious Spielberg pastiche and he knows that you probably know it. So he goes further to unveil the mechanics not only of moviemaking but of story construction. A little auteur has read somewhere that giving a character a love interest will increase the audience's emotional involvement with the character. So he recruits a girl to play the romantic interest of "The Case," and the girl will prove to be the romantic interest of Super 8. Abrams is telling us up front that this is a device, a ploy, a bit of that emotional manipulation for which Steven Spielberg is despised by many critics. It's all a part of the dare. The director shows us his bag of cinematic tricks, sets up his self-evidently unoriginal story, and in effect dares the audience not to respond or not to feel anything.

By the time our hero chooses to symbolically let go of his mother -- the scene involves a powerful magnetic field -- one probably has to have the proverbial heart of stone to not cry or laugh. What you do may depend on your feelings for Spielberg or for 1970s genre cinema or movies about moviemaking. My feelings were influenced by the nostalgia I felt for the era portrayed, a largely lost world like Super 8's steel town. However predictable the story was, Abrams had me with his evocation of 1979 -- though the soundtrack was predictably heavyhanded. Super 8 is arguably the antithesis of Rodriguez and Tarantino's Grindhouse: a trip back in time with state of the art effects rather than modern stories told with primitive movie methods -- though "The Case," when we finally see the finished work during the end credits -- seems like a spiritual brother to "Planet Terror" and "Death Proof." There's a touch of the grindhouse to the whole film, a slightly meaner spirit than prevailed in the sort of Spielberg film Abrams invokes, though not entirely alien to the Spielberg of Jaws and Jurassic Park. In a way, Super 8 is a synthesis of some Seventies themes and their presumed Spielbergian antitheses. Spielberg himself tapped into Seventies paranoia in Close Encounters, but his authoritarian antagonists weren't as mean or vicious as Abrams's military villains. Nor, of course, were his aliens, and if anything is offputting about Super 8 it's the juxtaposition of conventional Spielbergian epiphanies with the slaughter of so many other people. Spielberg films are about families rather than communities, and as long as two families were strengthened by Super 8's ordeal the families that were destroyed don't have to matter as much. Abrams is daring us to care, but only about certain people. That's not an issue in a Spielberg film when other people aren't dying all around the heroes. Here it became an issue with me and made an inevitably inferior imitation of Spielberg a little more so.

But Super 8 is still a fairly entertaining "roller coaster ride" movie in the old style with a refreshingly realistic sense of place that seems more three-dimensional than many 3D movies. The kids are consistently amusing if not exactly "mint" in either the film or the film within the film. Abrams is an efficient cinematic storyteller, though he comes up somewhat short of Spielberg's ideal clarity, and his pictorial sense is often inspired. His opening shot sets a tone of loss that's brilliantly simple: a steel mill has a sign boasting of its safety record, adding steadily to the number of days without an accident. But we see a worker change the tally from 479 to 1 and we know something awful has happened. Elsewhere, a crudely drawn, bloodstained map fills the screen until something grabs it from behind and crumples it -- a hand we had thought dead. Moments like these mark Abrams as having great potential that he may realize more completely once he has whims like Super 8 out of his system. That film may prove one of this year's best "summer movies," but I couldn't shake the feeling that Abrams should have had better things to do. This'll do for an undemanding weekend, and you'll probably care the way Abrams dares you to for exactly as long as the movie lasts -- but definitely no longer. It's a thing of the past before it even ends, after all, but at least they knew how to make summer movies back then.
Posted by Samuel Wilson at 9:39 PM

Great review Sam, as usual. I'm hoping to see this in the next few days. It was shot in my wife's hometown of Weirton, WV - so I hope I'm not too distracted looking for familiar sites.

"For audiences of a certain age, it's impossible not to feel that you've seen it before, and that seems to be the point of the project."

Indeed Samuel. Despite the formidable indeptedness, I think the Spielberg-Abrams collaborative experiment worked. There were some minor alterations on the basic premise, but these veterans know full well what will make all this bombastic work: audience affection for the central characters, and a strong feel for nostalgia. hence I reject the arguments that the film uses some ideas from other films. Whatever hybrid we have here, it works.

Again you've enriched the literature with a wonderful essay.

Mark, you remind me of how I felt as a Troy NY native watching Ironweed and The Age of Innocence. If anything, your posiiton makes Super 8 a bigger dare for you than for most other moviegoers. Let us know what you think.

Sam, I made a point of not trying to link scenes or ideas from Super 8 to specific Spielberg films or other contemporary movies that may have influenced Abrams's vision. Hybrid is as good a word as any for the end result, though I like synthesis because Super 8 is a dialectical film in its own crowd-pleasing way.