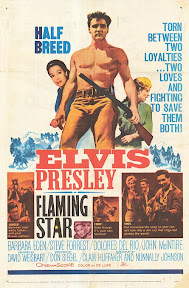 Volatile in its conception, Don Siegel's bleak western probably looks more exceptional in retrospect than it did at the time of its release in December 1960. Claif Huffaker's novel Flaming Lance had been adapted for film by the author and screenwriter Nunnaly Johnson as "Black Star," and a song had been recorded with that title before the studio decided to split the difference and call the movie Flaming Star. What a flaming star would signify remained unclear; the final tital song evokes a destiny up for grabs, but in the body of the film the flaming star stands, as a black star would have more convincingly, for death. More songs were composed for the picture; newspaper ads promised that four would be heard, but contemporary reviews indicate that the reviewers saw and heard what we see today: the title tune in voiceover and an almost perfunctory dance song within the first few minutes of the story. The other two were recorded but apparently cut too late to change the advertising. Both the studio and the star seemed to realize that songs wouldn't sit well with the story Siegel would tell. But these weren't the only changes. Fresh from filming Mario Bava's Black Sunday, Barbara Steele came to Hollywood to play the female lead. Accounts of her departure differ. Some say she fought with Siegel. Others report that the studio disapproved of her British accent. Barbara Eden replaced Steele and at least one career was probably changed by the transaction. Another career was more likely altered by this film's perceived box-office failure, which appeared to prove -- despite the evidence on screen -- that Elvis Presley wouldn't work out as a dramatic actor.

Elvis fans who go into this film blind can only be stunned by what they see. I don't watch Presley's films as a rule, but I have to imagine that nothing else he made was as violent and downbeat as Flaming Star -- his second picture after his return from military service. In 1960, it wasn't yet implausible that Presley would evolve into a star equally capable of dramatic and musical work, like Dean Martin or Frank Sinatra. A precedent existed for casting young pop singers in westerns, but Ricky Nelson didn't have to carry Rio Bravo by himself. Nor was Elvis so obliged; Siegel surrounded him with capable, veteran character actors, particularly John McIntire and Dolores Del Rio as his parents. The film doesn't prove Presley a master thespian, but he is entirely serviceable as a young man at times laconic, at times hotheaded, and eventually doomed.

Flaming Star is the story of the destruction of an American family. Pacer Burton (Presley) is the son of Sam and Neddy Burton (McIntire and Del Rio) and the half-brother of Clint (Steve Forrest), whose mother, Sam's first wife, apparently died in childbirth. The story is refreshingly free of the brother issues you might otherwise expect in such a film; the Burtons as a loving family unit are the heart of the film. But any hope for reconciliation between whites and natives the Burtons might represent is overwhelmed by the tide of white settlement and the desperation of native resistance. Neddy's Kiowa people are on the warpath, led by a new war chief, Buffalo Horn (Rodolfo Acosta). They treat the Burtons with respect, though many women in the tribe despise Neddy, but they attack a party of neighbors leaving the birthday party at the Burtons' where Elvis sings his only onscreen song. L. Q. Jones takes a hatchet in the forehead in the encounter. As Buffalo Horn takes the fight to the whites, and the settlers demand to know where the Burtons stand, neutrality begins to seem impossible, though the Burtons insist on it. They refuse demands from both sides to take sides, earning scorn from almost everyone.

Things fall apart rapidly after a crazed massacre survivor shoots Neddy on her way back from a visit to the Kiowa camp. The Burton men are outraged when the local white doctor initially refuses to treat Neddy under pressure from his neighbors. Pacer and Clint angrily force the issue by taking the doctor's daughter hostage, but Neddy has already seen the flaming star of death and gone wandering into the desert. The doctor claims that Neddy's would was hopeless all along, but a furious Pacer is barely restrained from killing him. This travesty proves to him that the whites will always hate him, so he decides to join Buffalo Horn. His father refuses to stop him; his grief only solidifies his unconditional love for his second son. McIntire has a heartbreaking little scene with Forrest after Presley leaves when he explains that he'd started out alone, except for infant Clint, and after everything they're all alone again. But it gets worse.

Kiowas are converging in Buffalo Horn's territory, and not all are aware of the chief's truce with the Burtons. A random band takes Sam Burton for just another white target and takes him out, though not without a bitter fight from the old man. Discovering the body, Clint goes into battle, and in the confusion Pacer rescues him from hostiles. Learning of his father's death in turn in an admirably understated scene, Pacer sends an injured Clint into town and safety while he turns on the Kiowas. It may seem anticlimactic that Siegel denies us this ultimate showdown, but I'm not sure the actual final scene, in which Pacer makes a Shane-like farewell to his brother, would have the tragic power it does if we knew for certain exactly what had happened to him.

Siegel's direction is vast and lean like many of the best Fifties westerns. He makes impressive use of landscape to emphasize the Burtons' isolation and their ultimate helplessness against larger human and historical forces. The Burtons are just about the only sympathetic characters in the whole film, though Eden's character eventually overcomes her anger and mistrust of the Burtons. The ballyhoo make more of an Eden-Presley romance than there is on screen, at least in the film's present form. If anything, her character is Clint's girl, and both she and Clint are stunned to learn of Pacer's yearning for her. Nor is there any strong hint that Clint will find solace with her; he's last seen limping pathetically after the departing Pacer, the last vestige of family left to him. There's a sincere despair to this film that must have sent the first wave of Elvis fans reeling from theaters in dismay and probably sealed its fate with everyone else who hadn't already mistakenly dismissed a Presley western as fluff. Col. Parker would soon decree that his charge should only make musical comedies, with results known to all. A feeling that Flaming Star may have been Presley's last chance to make something more of himself in the movies may add to the despairing feel of the film today. Again, his is no great performance, but it is one of the few good ones he gave that really make you regret all the others. Presley aside, Siegel's western is worthy of its period, the golden age of the genre in Hollywood.

Posted by Samuel Wilson at 5:59 PM

We agree that FLAMING STAR is Elvis' best movie, but the Colonel didn't completely enforce the musical comedy formula after this film's failure. WILD IN THE COUNTRY and FOLLOW THAT DREAM were not cookie cutter films, IT HAPPENED AT THE WORLD'S FAIR is strangely structured -- and worth seeing just for a look at the Seattle World's Fair -- CHARRO isn't very good but it certainly isn't one of his normal films (it's quite violent at times), THE TROUBLE WITH GIRLS almost relegates Elvis to a supporting character and is very good for about an hour before completely falling apart, and STAY AWAY, JOE is...insane.

Schlocksters, I bow to superior knowledge. My own research tied Star and Wild in the Country together as the projects that doomed Elivs's dramatic prospects, especially when followed by the big success of Blue Hawaii. I was also aware that Charro was more or less a straight western, though I have very few memories of it beyond the title song. I haven't seen the last two you mentioned at all, but I know their reputations are pretty bad.