Ladies and Gentlemen! Our next bout: a death match! A grudge fight to a finish with no time limit! In this corner! The Kyoto Madman, the winner of his last two fights -- by fatality! -- Ezaki Shinpachi! 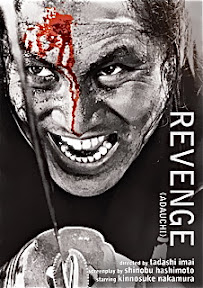 And in this corner!... Well, we'll get to that. But this is no way to introduce a samurai film, except that director Tadashi Imai and screenwriter Shinobu Hashimoto invite you to do just that. This film, Imai's follow-up to his international prize-winner Bushido: The Cruel Code of the Samurai, opens with the announcement of an officially-sanctioned duel between Shinpachi (Kinnosuke Nakamura, also from Bushido) and the latest challenger from the Okumo clan and the preparations for the big event. As the fighters meditate and worry, the organizers are setting up a reviewing stand and a picket fence to keep the expected rabble of spectators at a respectful distance. There's something disquieting about this almost immediately. We're not used to these duels of honor being treated as spectator sport. But Bushido proved Imai a debunker of heroic samurai mythos, and in Adauchi he and Hashimoto deconstruct the typical feud-and-duel storyline to demonstrate just how custom and self-interest make a mockery of the samurai ideal.

Imai slowly builds up the suspense as fight time approaches in the present by flashing back repeatedly to show how Shinpachi came to this point. The trouble began with a casual insult delivered by an Okumo scion as Shinpachi and his lower-ranking clan report for their customary military duty. The proud, reckless Shinpachi bristles when Okumo criticizes the dirt on his spear head. It can be polished clean with one wipe, he protests, and who says Okumo's own weapon doesn't gather dust on his off days? This just won't do. Shinpachi lacks the rank to talk to an Okumo like that, and Okumo demands satisfaction. They arrange to fight a clandestine duel to settle the issue, and in one of Imai's devices to deny us the conventional entertainment of samurai action, we never see the fight. Instead, we discover Shinpachi cleaning his blade by the river, and he directs the curious to the mortally-wounded Okumo.

Because the duel is unauthorized, both the Ezaki and Okumo clans are in legal jeopardy. They're liable to having their stipends confiscated by an eager feudal bureaucracy, but both clans resort to the insanity defense. Psychology in Tokugawa Japan not being what it'd become once the discipline was actually invented, the government has no real way to refute the claim. They let the matter drop on the understanding that the "insane" Shinpachi will be confined to a monastery. Meanwhile, the lack of liability on the late Okumo's part allows his estate to devolve upon his more talented brother Shume (Tetsuro Tamba), who decides that with the coast clear legally, he can settle scores with Shinpachi. He isn't going to get into trouble by fighting a duel, of course; he's just going to murder the bastard.

Shinpachi intercepts Shume on the road, and now we have a proper fight scene -- sort of. Shume is clearly the more skilled swordsman, but Shinpachi fights with desperation and raw strength, and he has a little bit of luck on his side. Needless to say, the news baffles the local administration: surely the Okumos can't say that two brothers were insane. What is it, catching? But instead of cracking down on the Okumo clan, the government presses for a settlement of their beef with Shinpachi. With the Ezaki clan's standing on the line, a deal is negotiated. The government will sanction a duel between Shinpachi and a younger Okumo brother -- but the fix will be in. To save his family's standing, Shinpachi will throw the fight, presenting no resistance to a clearly outmatched youngster. Unfortunately, while he's on the way to the makeshift arena, the terms of the fix are changed. Just in case Shinpachi changes his mind, young Okumo will be assisted by six top fighting retainers who'll soften Shinpachi up until Okumo can safely finish him off.

It's one thing to agree to do the job, as they say in professional wrestling, and another not to know ahead of time that they intend to make you bleed by hitting you with a real chair. Right off the bat, Shinpachi is disturbed to see and hear the jeering crowd that's formed to watch his humiliation. And when Okumo's assistants hit the ring, our hero, who hasn't seemed to have been entirely faking the crazy thing, simply snaps. He protests that assistance isn't necessary, and for him it is insult and injury, proving that the Okumo and the government don't trust him and really want to embarrass him before everyone. Under those circumstances, screw all agreements -- Shinpachi is going to fight for real....

Samurai movies are cool -- but Tadashi Imai seems to have dedicated himself to eliminating the cool from the genre to expose the cruelty, stupidity and suffering that define the ethos for him. While it's almost impossible to eliminate a certain inherent elegance to the swordplay that kills with one blow, Imai strives to do so by emphasizing the confusion and raw fear that would probably come to the surface when real people fought. If Nakamura appears to go over the top playing the increasingly crazed Shinpachi, it's probably necessary to drive home Imai's point. And when Nakamura gets to go on a typical final rampage, Imai makes clear that fear is a major factor in whatever success his enjoys. Even if you outnumber a guy by six or more to one, if he comes bellering at you with a bloodstained sword, you're probably going to be scared despite your security in numbers.

Because it's less of a stunt movie than the seven-part, seven-roles-for-Nakamura Bushido, Adauchi (do we really need another movie called Revenge?) is a superior movie in story construction and character development. It's not as much of a showcase for Nakamura, but he definitely gives the performance Imai wants, and overall Imai makes the impression he wants. He's not a flashy or gimmicky director but tells his story with pictorial clarity. He seems to prefer the controlled environment of a soundstage, but the art direction and black-and-white cinematography make the painted backdrops look more like craftsmanship than mere fakery. AnimEigo has made their new DVD of Adauchi available as a Netflix stream, but the transfer isn't perfect. You do get a sharp widescreen transfer, but the text annotations that AnimEigo often provides above the image are cut off at the top of the screen. That won't really impede your understanding of the story, but the annotations themselves may prove an annoyance to viewers unaccustomed to AnimEigo product. Samurai film fans who can ignore the annoyance should appreciate Imai's change of pace and critical stance toward the genre, and fans of Japanese film overall should appreciate his renewed outcry against the cruel codes of the past.
Posted by Samuel Wilson at 8:04 PM

Great post shared by author. I appreciate it. Thanks for sharing this informative post. Keep posting updates.
Ninja Gear

Hi, and thanks for you competent posting. I just finished seeing Adauchi on NetFlix. Great movie, well written. Moral corruption is current currency today and then. (Herbert from Brazil).

Herbert, thanks for writing. With luck the combined DVD release and Netflix availability will get this film more of the recognition it deserves.