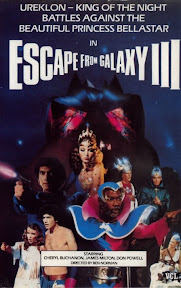 Now this is why I buy Mill Creek box sets. Bitto Albertini's space opera is no mere Star Wars knockoff. Watching it, I had the feeling that it was even more of a Starcrash rip-off, a second degree of exploitation, than a homage to Lucas's original. And wouldn't you know: in many European markets, Escape was in fact marketed as Starcrash II. It apparently uses some effects footage from the older film, and apes it in its vision of a galaxy of kings and emperors, a heroine named "Star," a frizzy-haired man of action and some strenuous genre-bending. It may in fact surpass Starcrash in raw stupidity, to such an extent that it may rival its model for entertainment value.

A long galaxy ago, in a time far, far away, the planet Ixilon, ruled by benevolent King Zenon (?), is under attack by Oraclon, the "powerful king of the night" (Don Powell, a onetime Hollywood dancer who also composed the score for this film). From his appearance, Oraclon earned his kingdom by being a kind of beacon in the darkness, from his glittery beard to a costume out of the Golden Age of Comics. But he wants more, and despite Princess Belle Star's assurance that "we'll overcome the dark forces of evil," Zenon prepares for the worst. 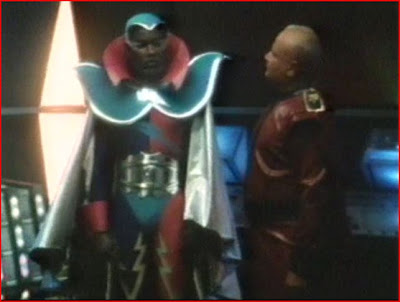 Oraclon kinda reminds me of the old Psycho-Pirate in DC Comics. He certainly runs the gamut of emotions. 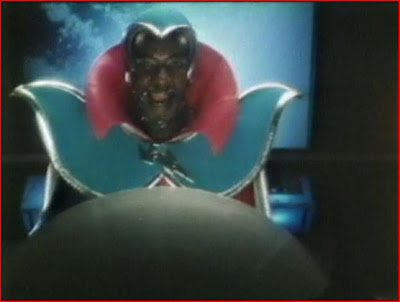 After some desultory maneuvering and laser combat in space, he delegates Belle (Sherry aka Cheryl Buchanan) to be his ambassador to the Antaen Empire, a potential ally, with loyal lunkhead Lithian (James Milton) as her protector. In the confusion of battle our heroes make good their escape while Ixilon goes down fighting, even though Oraclon has technology that enables him to look into the cockpit of their escape craft. 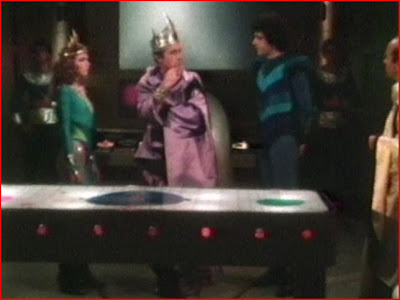 Belle Star and Lithian flank their doomed monarch above, and fly their way out of Dodge below. 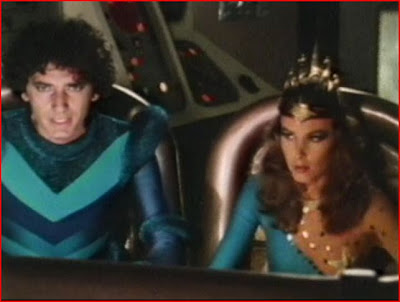 Both sides have a lot of technology to throw around, and one of the joys of the English version is the avalanche of technobabble, with special emphasis on the babble. Try some samples:

Zenon: We'll throw up a shield of mega-rays.

Oraclon excels at overall villain rant, e.g. "You galactic idiots! Imbeciles! Belle Star and Lithian are excaping! We are not returning to base, until I have their heads at my feet." But despite his big talk the good guys manage to excape all the way to a strange blue planet with a oxygen-nitrogen atmosphere. They appear to have landed in the middle of a peplum, on a planet populated by people in togas and tunics. But the architecture is somewhere between Hobbitown and Munchkin Land, and the environment is strange and terrifying to the newcomers. 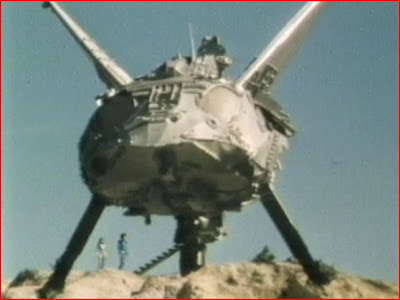 Lithian: What is this stuff?


Belle Star: It's water! I once saw some in my father's collection of intergalactic minerals.


Lithian: What do you use it for? 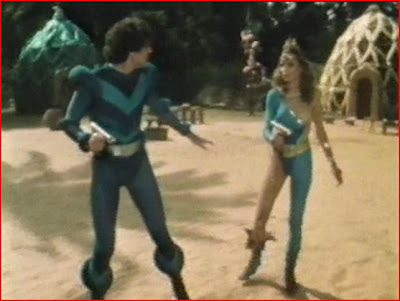 A slow learner throughout, Lithian flees in fright when the princess playfully splashes some of the alien substance his way. But their idyll is short-lived once the primitives gather up their courage to surround the strangers and capture them. Lithian reminds Belle that he could have dispersed the rabble with his beta-ray, but Princess Star holds out hope that they can prove their friendliness before they're condemned to be burned at the stake. That's a good hunch, since Lithian soon has an opportunity to make a superhuman vertical leap to save a child from falling off a cliff. He'll later show that he has superhuman strength when he helps the villagers build a dam by tossing boulders into a river. Belle has super strength as well, and both heroes can shoot beams of energy from their fingers when the writer remembers that they can. But basically, like most aliens in Euro sci-fi, they may as well be magical creatures who can do whatever the director can afford to show them doing. 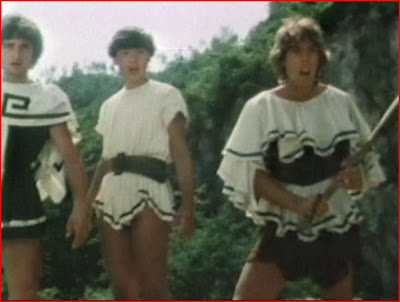 If this is how the male Eloi of post-apocalyptic Peplum Earth react to Lithian in his costume, how will they react when he reveals his loinclothed manliness? 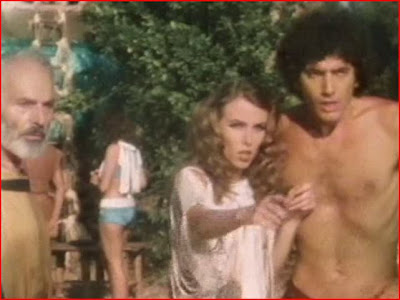 Life on Ixilon was long and dull. We learn that Belle and Lithian are immortal, but like most non-humans, have never kissed and never had sex -- nor, as we've seen, have they ever bathed. Belle proves a quick study in the ways of this strange new world -- bravely taking nude showers in the local waterfall definitely speeds things along -- while I've already mentioned Lithian's more protracted learning curve. Belle tries to demonstrate the pleasures of the body, but leaves that task to the local females when he seems uninterested in her. For a reel or so Escape turns into a sci-fi sex comedy -- and to be specific, it's a post-apocalyptic sex comedy. The village elder informs his guests that his people are the sole survivors of an ancient civilization, and when Oraclon finally shows up, his scan confirms a long-ago burst of intense radiation typical of a destructive war. It all adds up pretty quickly: Star Wars/Starcrash ripoff, postapocalyptic peplum, genre sex comedy. It's a cult-movie trash-heap paradise. 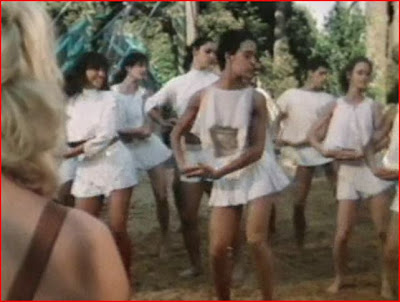 But no sooner have the earthlings celebrated life with a charmingly awkward bump and grind ensemble in the old peplum spirit, and no sooner have our heroes realized, upon finally doing the dirty with each other instead of strangers, that they are no longer immortal, than Oraclon shows up again to rain on the parade with lasers and bombs. Belle and Lithian can save their new home only by offering themselves up to their enemy, who cackles at the thought of their eternal servitude -- little does he know. Meanwhile, the good guys still have a card up their sleeves. They'll use sex as a weapon. Belle puts the moves on Oraclon, offering him a different kind of servitude. As he accepts the offer, Lithian becomes a kind of blue-eyed monster. Is this something he could have done before, or has jealousy and/or sex given him new powers? I'll leave the answer to the Monday morning quarterbacks. All I know is that when he zaps Belle while she's lip-locked with Oraclon, it's good night King of the Night. He's not just relegated to the ash-heap of history; he becomes the ash-heap of history! Good triumphs once again! 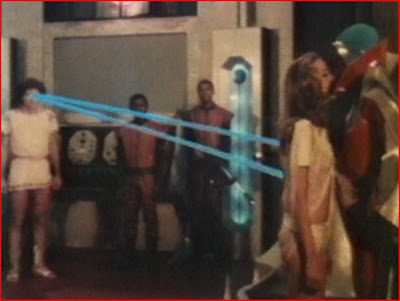 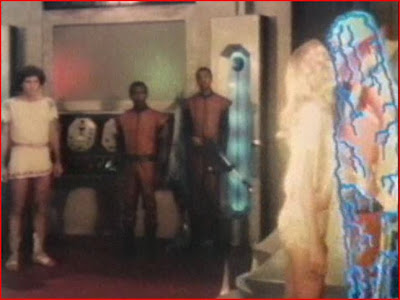 As long as you know what you're getting into, it's hard to hate this film. It's so enthusiastically and unselfconsciously stupid that the enthusiasm overwhelms the stupidity. Well, maybe not, but the stupidity actually factors into the enthusiasm and carries you along. Escape From Galaxy 3 has a certain childish charm, despite its arguably adult elements, and that exuberant naivete transcends the cynicism you'd think would be inherent in a Starcrash ripoff. It is definitely one of the dumbest movies you'll ever see, but that's what's fun about it. It's dumb but not dull, and for a film like this, that's probably all you can ask for. Escape is easily the most entertaining stage of the Mill Creek Invasion so far, but there's still much more to come.
Posted by Samuel Wilson at 8:00 PM

I watched this one shortly after discovering STAR CRASH, and enjoyed it a lot. Of course it's not on the same level as that one for me, but Oraclon is a fantastic villain (in all senses of the word) and the set design and plotting here are just how I want my post-apocalyptic sex-comedy sci-fi fantasy flicks to be. :) It might damage the viewer's IQ test scores, but I was smiling all the way through.

Vicar, I noticed your review after starting my own, and we seem to be in agreement on this one. That technobabble could very well be catching, so I wouldn't recommend watching Galaxy 3 just before a job interview!