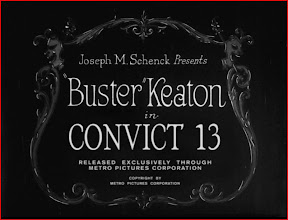 If Buster Keaton held back his first independent short until he had produced a more distinctive work, it was apparently okay to release his third short, following the breakthrough of One Week, even though Convict 13 seems like something any silent comic might make in a prison setting. Worse, Keaton can't even fill 20 minutes with prison gags. You get the impression after the first five minutes that he'd wanted to make a comedy about golf, but gave up after some unimpressive business while trying to extract a ball from a fish. Not once, not twice, but three times Buster dives into a pond, each time grabbing a different fish and throttling it until he gets his ball back. I presume we're meant to find his persistence amusing, but that's the best Keaton can do with the subject. Well, Chaplin hardly fared better when he felt compelled to address the golf craze in the first part of The Idle Class. There really isn't much to do with the subject in slapstick comedy unless you're aiming for the all-out absurd as Larry Semon was in Golf. Here Semon actually surpassed the masters because he took golf mania off the links and had his idiot character wreak havoc by practising his game indoors. But making perhaps the best silent comedy about golf is a small triumph at most -- and I don't claim to have exhausted the subject. I will give Keaton credit for a proto-surreal image of himself teeing off on a ball bobbing in the water, after he'd liberated it from the fish, and for having a mostly unstereotyped black actor as his caddy. 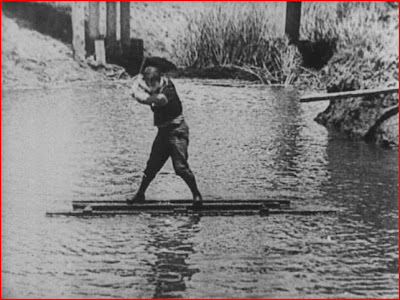 After Keaton kayos himself by bouncing a ball against a wall and into his head, Convict 13 takes on its true nature. An escaped prisoner, the numbered convict of the title, comes across the unconscious Buster and switches clothes with him. In a typical instance of Buster's tunnel vision, he doesn't immediately notice that he's wearing the archetypal striped uniform of the jailbird. It's not until he's flanked by menacing prison guard that he wonders what's the matter and notices the stripes and the unlucky number on his sleeve. He flees, of course, but his flight is actually some sort of acceptance. He could have tried to explain what he might presume to have happened. He could at least have insisted on his innocence. But it's almost as if he assumes that, clothed as a convict, he must be a fugitive. The message of the film does seem to be that clothes make the man. The guards don't know their charges by facial features. The real Convict 13, wearing Buster's clothes, can walk right past them, yet they never question that Buster, by virtue of his clothes, is their prisoner. This complacent acceptance of superficiality is a theme of the picture. It's also expressed when a gang of guards falls in behind Buster as he attempts to walk inconspicuously away from the hunt. He ends up leading a line of march, but manages to shake his extended tail by going into evolutions and getting them all to turn in the other direction while he runs off. But Buster himself has a passive compulsion to accept his circumstances. Once he inadvertently imprisons himself while trying to hide from his pursuers, he becomes a model guest, cleaning the dust off the soles of his shoes before entering the prison yard, after first knocking on the gate. Even when he learns that he's to be hanged momentarily, he doesn't get real and recall that he's innocent. He simply goes with the flow. Perhaps there's something uniquely Keatonish about this after all. 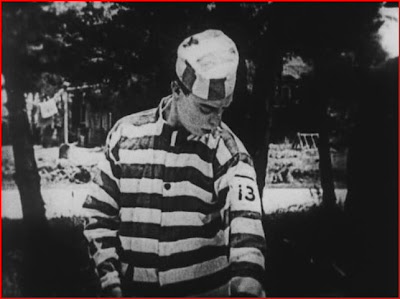 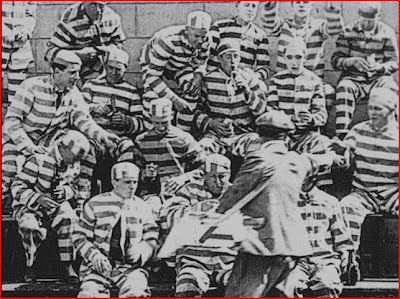 The prison is an absurd place where hangings are spectator events worked by concessions sellers. When Buster's hanging is sabotaged by his girlfriend's replacement of the noose with her father the warden's elastic exercise cord, dad calms the crowd by promising to hang two convicts tomorrow. As in future Keaton films, the border between realistic violence and burlesque is fuzzy. When a riot breaks out, convicts and guards alike are shot, and not in the butt like in a Three Stooges short. But one such victim betrays the burlesque by throwing a few classic convulsive pantomime kicks as he expires. Before this, Buster has turned from con to guard after accidentally braining his keeper with his sledgehammer. Again, no one questions his authenticity or notes the new guard's resemblance to the presumed Convict 13. And again, Buster has a moment when his clothes are his undoing. A giant convict has been riled into a frenzy by a bullying guard and has laid out practically the entire platoon. Buster ambles onto the scene and seems to have forgotten that he's now a guard. He wonders why the con is eyeing him so strangely, and in shots that mirror his own first encounter with the guards, he notices at last that this is a convict, and he himself is a guard -- they are natural enemies, because their costumes make them so. 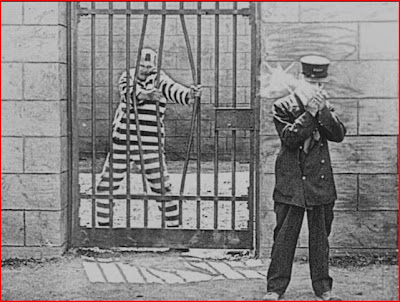 The absurdities of the picture are cheaply explained away by having Buster the golfer wake from his golfball-induced dream, but the dream-world of Convict 13 is not unlike the "real" world of Keaton's later pictures. At this early point, the dream is a hedge, and as a whole the prison theme is one that Keaton actually does better, at least for a few moments, in one of his lamented Educational shorts from the 1930s, Jail Bait. That film has a great extended gag on a similar theme, with Buster switching from con to guard and back again during a riot and always running into the wrong faction. But if an Educational is better than an early silent short, that really just means that Keaton, despite the prodigy of One Week, is still learning his craft and discovering his unique sense of humor. Convict 13 shows what he thinks is funny; later he'll film what he knows is funny.
Posted by Samuel Wilson at 12:57 AM

I saw this back when I was doing my Remembering the Movies series and like you felt it was rather lame. Sometimes absurdities are hilarious, and sometimes they're just absurdities. A fine line he later mastered.

Joel, it took me a while to think of something to say about this one, and I had to watch it again to finally see the absurdity amid the lameness. Keaton set too high a standard for himself with One Week and instantly fell short of it, but things get better from here.

Samuel, I liked this a bit more than you did, but it was hardly among the best shorts I recently saw at the Keaton Festival. It was one of those hit and miss vehiclesd, which all things considered was rare for the line-up. Yes, ONE WEEK may well be the greatest short he ever made. I didn't care much for the golf bit in CONVICT, but some of the jail sequences had the audience in stiches.

I personally love when comedic actors do serious roles. I think it benefits both the audience and the actor. Just think if robin williams never did a serious role. As somebody who loves everything comedy, I feel like a good serious role deepens my love for that actor and impresses me when they can nail both. Also it goes the other way to. Good dramatic actors doing hilarious comedic characters... Tom Cruise... Boom

I thought the joke with the fish and the golf balls and K trying to tee off from the water until a fish steals his ball was all really funny. I laughed my ass off. And there are three or four fabulous falls. But yeah, not one of his masterworks.