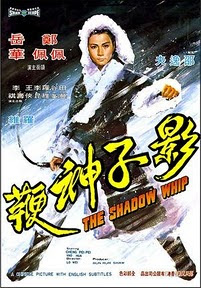 A martial arts or wuxia movie set in snowy locations is as unusual to me as a spaghetti western in a similar setting, but any comparison between Lo Wei's wintry adventure and Sergio Corbucci's The Great Silence must end there. The two films are alike only in their bracing visual novelty, the locations for Shadow Whip enlivening a rather silly story. The mighty Cheng Pei-Pei stars as innkeeper Yun Kaiyun, who lives and learns the art of the fighting whip from her uncle Fang Chentian (Feng Tien). All of a sudden, a chance encounter on the road into town brings all sorts of trouble down on the inn. Two swordsmen and a band of bandits all have grudges with Fang, the man known as "the Shadow Whip," and it's taken all of them 15 years to track him down. Turns out he's been in hiding ever since a big, brazen robbery of a caravan that left its organizer dead, the security firm hired to protect it bankrupt, and the bandit gang severely pissed off. They'd planned to raid the caravan, only to have the Shadow Whip apparently beat them to it, and now they want to avenge his waste of their time. Meanwhile, Fang's onetime sworn brother, who'd asked him to help out guarding the caravan, wants revenge for his betrayal, and the son of the organizer wants plain old blood for blood. But what looks like a tale of terrible discoveries by Yun about her uncle twists into a whodunit when a flashback reveals his innocence. It isn't much of a mystery once Fang himself is off the hook, and it's hard to believe that he's spent 15 years in hiding without ever considering the most obvious possibility. But this is the sort of picture where the real culprit can be tricked into incriminating himself with ridiculous ease, so Feng's stupidity doesn't exactly stand out. Let's concede that the plot is just an excuse for the action and move on to the meat of the picture.

The Shadow Whip's winter wonderland: Cheng Pei-Pei rides to the rescue (above) while Feng Tien demonstrates a practical use of his signature weapon.

Fang and Yun can do amazing things with whips, with a lot of help from the director. Sight gags abound: they can whip a sword out of one enemy's hand and fling it into the belly of another; with superhuman strength, Yun can wrap a whip around a foe and haul him into the air to serve as a human shield against a flight of spears; Fang can whip an antagonist and torque him skyward, only to have Yun lash out and slam the poor schmuck to the ground. That may be cool on paper, but the stunt and effects work here is often quite crude, including some of the most blatantly visible wires I've ever seen on actors. It's almost as if Lo Wei presumes we'll be so impressed with his locations that we'll ignore his sloppiness with the basics. This is one of those films where the most powerful characters can virtually fly through the air, where one character is so light on his feet that he leaves no prints in the snow, but Lo Wei lacks the vision or the budget to give the superhuman action the necessary disbelief-suspending smoothness. This isn't an uncommon fault in Shaw Bros. product of the early Seventies, but this time the fight scenes don't quite make up for it. The whip-vs.-sword fights lack the lethal elegance of sword-vs-sword or the creative weirdness of more eccentric weapons -- like the exploding crossbow bolts fired by the villainous "Serial Trio" here. I'm sure there's an art to whip fighting, but here it looks like so much flailing about, at one extreme, or unconvincing stage artifice, at the other.

Fortunately, a brisk pace (done in 79 minutes) and enthusiastic performances by Cheng and the rest of the cast make Shadow Whip easy to endure, while the snowy locations are an added attraction that distinguishes the picture from the run of the mill. It's a mild mediocrity for the most part, but it's still a must-see for Cheng Pei-Pei completists, and Shaw Bros. fans should find something to enjoy here.
Posted by Samuel Wilson at 11:46 PM

I haven't watched this one in a long time, Sam, but I remember thinking it to be an average picture. There was another movie that began production around the same time in 1969 entitled THE BLACK ENFORCER (1972) that was an entirely snow bound feature directed by Ho Meng Hua. Both films had their exteriors shot in Korea. Tien Feng is in that one, too, and he plays an evil bastard there as well. There's numerous other Shaw pictures with a snow setting, but not from start to finish. Cheh's ONE ARMED SWORDSMAN (Tien Feng as a good guy!), THE SWORD OF SWORDS which just came out here legit including its English dub, has a portion of the film in the snow. It has to be Tien Feng's most sadistic role which is saying something. I highly recommend that one. PURSUIT (1972) is another one.

I did a Pei pei piece full of behind the scenes photos some time back. Did you happen to see it? Nice write up, Sam. I look forward to more of your opinions on these.

venom, if I'm remembering the cast like, Tien Feng is only assumed to be a bad guy here, which would make Shadow Whip a case of creative exploitation of typecasting. I saw Sword of Swords a few weeks ago, but will have to look up your Cheng compilation.

I'll have to watch it again as I can't remember much about the movie. It wasn't as good as I was hoping it would be. Oddly enough, Pei pei didn't stay retired long as both she and Bruce Lee were hired at roughly the same time; the most notable being Lee's signing in light of Shaw's failure to come to a contract agreement with him. Had Shaw's gotten Lee, it's doubtful Golden Harvest would have survived very much longer. They were a new and struggling company that was saved by the acquisition of Lee. Lee did visit Shaw studio at least two separate times.

Lo Wei, too, jumped ship at that time, but his stamp on Lee's career is possibly negligible at best. Personally, I think his best work was done at Shaw Brothers.