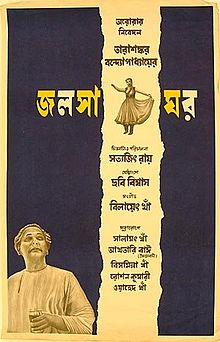 My impression had been that Satyajit Ray was the "serious" Indian director, the one who didn't stuff his movies with gratuitous musical numbers and had the respect of the global arthouse crowd. So of course both of his films that I've seen -- this one and The Chess Players -- have extensive musical interludes. Neither, however, fits the stereotype of a "Bollywood" product. The performances are (presumably) authentic to the period of each film and relevant to each film's story. That's more true of Jalsaghar, which Ray made between the second and third films of his fame-making "Apu" trilogy. Like Chess Players, Music Room is a gently satiric story of aristocracy in decline. But while Chess Players is a period piece in which its protagonists game away while Britain consolidates its power over India, Music Room is set in the modern day and sees its hero succumb to modernity and his own indolence. But with his demise, Ray seems to say, an older, admirable culture passes from the scene.

Biswambhar Roy (Chhabi Biswas) is a zamindar, a Bengali feudal landlord whose land and revenues are slowly being washed away by floods and storms. Despite his declining fortunes, Roy still insists on playing his traditional role as a patron of the arts, which means hiring the leading musicians and dancers to perform for the leading men of the community in his music room as well as setting off lots of fireworks during popular festivals. An amateur musician himself, he imparts his love of Indian music to his son while his wife laments his impractical ways. Roy works himself into a rivalry with a local upstart, the businessman Mahim Ganguli (Gangapada Bose), who's building an ostentatious modern home on land acquired from the zamindar, with a music room of his own. Roy is determined to outbid Ganguli for the best talent even if he bankrupts himself, but breaks down when his wife and son are killed by a cyclone returning from a trip to relatives.

Heartbroken, Roy closes his music room and vegetates as his fortune further deteriorates, until Ganguli shows up to announce his hiring of an acclaimed dancer for his performance space. Aroused by the once-deferential Ganguli's newfound condescension, Roy orders his retainers to take the last of his savings, money reserved for local temples, to hire the same dancer for his own refurbished music room. After her performance, he has one last triumph over Ganguli, insisting on his seignurial right to make the first offering of coins to her. Having reaffirmed himself, and having nothing left but furniture to auction off, he decides to die in the saddle as his mighty ancestors might have....

Ray regards Roy with affectionate ambivalence. The zamindar is undeniably a hopeless spendthrift and what the Russians might call a superfluous man. He is literally framed as a museum piece, often gazing into a full-length mirror surrounded by portraits of his ancestors, as if he were no more than a figment of art or, worse, a piece of furniture himself. Roy simply seems unfit for the modern world, but what does that say for the modern world? It's hard to say, mainly because Ray never lets us really see things from Ganguli's perspective. The businessman is little more than a foil for Roy, motivated by ambition and some resentment of Roy's past condescension toward him. But Ray seems to want to say that Ganguli is some sort of philistine compared to Roy, someone who patronizes the arts only to show off his wealth, while Roy is shown as a sincere music lover. The musicians and dancers make money no matter who pays them, of course, but Ray wants us to be as impressed with Roy's devotion to music as we are bound to be by the virtuoso performers the director puts on screen. To that extent, Jalsaghar is like the parable of the widow's mite. Ganguli may well prove as reliable a patron of the arts as Roy was, but the moral of the story seems to be, in part, that Roy's love is greater because he gave everything he had. And if the Indian aristocracy is to pass away anyway, then what a way to go....

Jalsaghar reminded me more than anything else of Luchino Visconti's The Leopard, another story of an aristocrat attempting to cope with changing times. While Roy never learns the famously paradoxical lesson of that film and the novel that inspired it -- if we want things to stay as they are, then everything has to change -- and ends up more like Gerald O'Hara from Gone With The Wind than like Burt Lancaster's Sicilian grandee, Ray's and Visconti's films have a similar elegiac tone of regret for what goes when aristocracy passes away. If that sounds reactionary, bear in mind that Visconti was a Marxist, while I don't know about Ray's politics, and that in both films aristocracy is supplanted not by egalitarian democracy but by bourgeois boors. That overthrow leaves an implicit question mark hanging over the end of The Music Room. Will a world of Gangulis who no longer have Roys to emulate still have time and resources to dedicate to art for art's sake? Depending on your feeling for Indian music and dance -- and anyone's feelings aside, the virtuosity of all the performers is indisputable -- Ray makes that a question worth asking and an occasion for regretting the demise of someone who might otherwise seem like no great loss. In a film intended as a tribute to art, that's a small triumph of art itself.
Posted by Samuel Wilson at 9:48 PM

This one is on my current list to see as it's a new Criterion DVD. The Ray films you have seen are not the ones I have seen, but I do encourage you to see the Apu Trilogy. I recently reviewed it here.

As far as music is concerned, the soundtracks in the Apu Trilogy by Ravi Shankar are AMAZING.

Your impression of Satyajit Ray being a "serious" Indian director couldn't be more correct. I can say that with some authority having watched and re-watched Ray's movies and read numerous articles both by him and on him. "Bollywood" represents just a part of Indian cinema and the pejorative tone that has come to be associated with it is not without reason.

The technicalities aside, I found your review excellent to say the least. You made a great statement in your concluding section, "Will a world of Gangulis who no longer have Roys to emulate still have time and resources to dedicate to art for art's sake?" That most certainly is worth pondering over.

In fact, your opinion that Ganguly could very well be as much a music lover as Roy is indeed worth discussing about, despite the fact that he has been made out to be no more than a philistine.

There's an interesting anecdote that I'd like to share with regards to this movie. When Ray was scouting for location he wasn't getting the house that he was looking for. After spending a lot of time for this purpose, he at last stumbled upon the house that was used for the zamindar's ancestral residence at a village in Bengal.

As it later turned out, this was the same house that was used as the basis by Tarashankar Bannerjee when he'd written the novella on which the film was based. That really showed the director's uncanny eye for detail.

A lot of film writers have come to regard Jalsaghar as one of Ray's best works. Though I might not place the movie among, say, Ray's 5 best works - that list, for me, would constitute of (in no particular order) Apur Sansar, Goopy Gyne Bagha Byne, Aranyer Din Ratri, Charulata & Nayak - there's no doubting the importance of this movie in his body of work.

"In a film intended as a tribute to art, that's a small triumph of art itself." Touche!!!

Jon and Shubhajit, I appreciate your recommendations. Ray is a director I avoided for years because his subject matter struck me as mundane, but I've come to appreciate the idiosyncracy of even the "mundane" matter of different film cultures.

To Shubhajit in particular, my only other exposure to Bengali cinema was a regrettably defective DVD of Calcutta 71 that simply broke down mid-film -- but what I saw was strong stuff. And that's a wonderful story about Ray's location scouting, as well as a tribute to the original writer's accuracy of description.