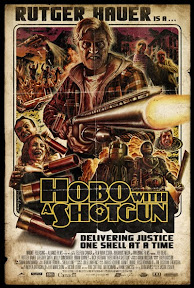 You have to laugh. There's no other way to deal with Jason Eisener's attempt at an instant-cult film, an affectionate burlesque of 1980s vigilante movies. For my purposes, "burlesque" is a particular type of comedy, something different from parody or satire. While parody makes fun of genre conventions, and satire exposes their unreality, burlesque exploits the artificiality of genre and the artificiality of drama itself without repudiating or negating what it exploits. Burlesque laughs with its material, not at it, sharing with its audience the fundamental joke -- "that's not real!" -- while continuing to play the material with as straight a face as necessary. The core form of burlesque is slapstick comedy, which subjects characters to traumatic violence without truly traumatizing them. Hobo With A Shotgun is a slapstick comedy, as is only proper, since the action movie as we know it evolved from silent comedy. It's the sort of film where a character can have her arm ground to a gory point by the blades of a lawn mower, and can immediately use the sharp stump to stab her tormentor -- all this less than 24 hours after her head had nearly been cut off by a hacksaw. You may not find that funny, but it's meant to be funny. By hyper-exaggerating the already exaggerated violence of vigilante movies -- not to mention post-apocalypse films and spaghetti westerns -- Hobo takes cinematic ultra-violence back to its comedy roots. So it's probably no accident that its hero is what once would have been called a tramp.

The story is an amalgam of spaghetti western, vigilante film and post-apocalypse in a retro, 80s-ish setting. The man known only as the Hobo (Rutger Hauer) arrives in Hope Town, renamed Scum Town by a graffiti artist. The place is far behind the times, assuming the time to be the present and not the actual 1980s. A video arcade is one of downtown's main attractions and stereotypical spike-haired punks lurk in the background. An entrepreneur films bumfights with an old-timey camcorder. There's little evidence of an economy, even a criminal one. The town is ruled by a ruthless, nihilistic and sadistic family, "The Drake" and his two sons, who demand applause whenever they put enemies to death and freely dump sacks of cocaine everywhere to keep the populace dependent. They seem motivated by nothing more than cruelty, and they cultivate cruelty in their followers. Topless girls beat a man dangling upside down with bats like he was a pinata. In the arcade you can hit a homeless man in the foot with a huge hammer as if he was the bell-ringing test of strength at a carnival. Not even children are safe. They are torched alive in school buses and dumpsters, or else molested by Santa-clad predators. The unmotivated cruelty of Scum Town and its rulers reminded me of spaghetti westerns, and the impression would be reinforced by the arrival of a mysterious stranger. But the same lack of motivation costs Hobo much of the contemporary relevance -- apart from its essential compassion for the homeless --  that vigilante films may have had in their own time. It's less Death Wish than Death Wish 3, for those keeping score. Still, it's cool to see an action film with poor folk at its heart.

Once upon a time, Rutger Hauer was such a beautiful man that Anne Rice thought him the ideal actor to play the Vampire Lestat. Now he is a Hobo with a Shotgun, and there's no illusion that this film will do for him what The Wrestler sort of did for Mickey Rourke or JCVD might have done for Jean-Claude Van Damme. Hauer is clearly a limited performer at this stage of his career, but like many a beloved B-movie performer he gives his all here. At his best, he sells the salient point that, for all his heroism, the Hobo is as crazy as a bedbug. He's hobbled sometimes by writer John Davies's desperate attempts to give the character memorable lines, but he gives a completely sincere performance that helps make the Hobo a figure of pathos amid the carnage in keeping with the cinematic heritage of homelessness. To put Hobo in historical perspective, think of it as Chaplin's Easy Street with exploding abdomens, decapitations, and lots of wirework to sell shotgun blasts. Hauer's Hobo even has a girl to pine over, though his relationship with Abby the spunky prostitute (Molly Dunsworth) is more quasi-paternal than romantic. By modern standards, the Hobo's admirably free of backstory baggage; Davies and Eisener resist any temptation to explain why the old man is riding the rails at the start of the show. This sort of hero needs to be a stranger -- or an everyman -- in a way few action heroes today are allowed to be. There's something primal in his anonymity that'd be lost if there were a why to his wandering or his madness. When he grabs the shotgun off the pawnshop rack to stop an armed robbery, abandoning his dream of a one-man lawn-mowing business, it's not to resolve a daddy issue or to redeem himself for some past failure. It's simply the right thing to do, and would be for anyone, as far as this film's concerned.

Hobo With a Shotgun has a lot going for it creatively, from the queasily colorful cinematography of Karim Hussain and suitably grungy location work to a collaborative score that opens with a gloriously overripe pastoral theme that reminded me of Riz Ortolani's beautiful themes for such stuff as Goodbye Uncle Tom and Cannibal Holocaust and closes with a poignant train whistle. It's evocative and allusive in many ways, especially in its use of The Plague, a team of killers who show up like post-apocalyptic menaces and star in their own video game yet look more like robot refugees from a Republic serial.

There's a wonderfully gratuitous moment when the Hobo wakes up a captive of the Plague, and sees the duo tending, with considerable effort, to their pet octopus. The moment hints at depths of unsounded weirdness that enrich the film's fantastical feel. On the other hand, the primary villains are Hobo's main weakness. The Drake and his boys seem to see themselves as entertainers keeping the masses docile with dope and deadly circuses, but they're not very entertaining themselves. Neither the roles nor the actors really rise to the level of surreal supervillainy the concept needs to thrive. The weirdest any of them get is to wear hockey skates into battle; they seem pretty mundane otherwise. But there's a lot to enjoy here without them, whether you're a genre buff who recognizes all the influences at play or a fan of over-the-top violence. However, there's not much here for those with over-refined scruples or, alas, for people with purely contemporary taste in action. Hobo's retro approach will seem pointless -- or, worse, simply cheap -- to those accustomed to CGI mayhem and the god's-eye perspectives it makes possible They'll be hard-pressed to understand why Eisener made the film this way, and at that point an exploitation film arguably ceases to be pure exploitation. It may be scandalous to say so, but this gruesome exercise in deliberate obsolescence comes closer to being a work of art. But don't let that keep you away; if you're looking for a wild catharsis to break the tensions of the moment, Hobo With a Shotgun is a mad, epic, hilarious riot that lives up to its hype.
Posted by Samuel Wilson at 12:14 AM

For the first third of the film, I was sickened by the senseless and gratuitous violence in this film. Once I realized just how over the top it was, I could laugh at it. It is a somewhat surreal setting in that this town seems to have as many homeless people as it does "homed" people and everyone seems to live in fear - except when they become a rampaging mob. It makes me think perhaps we should give every hobo a shotgun.