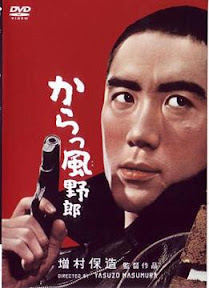 Imagine Ernest Hemingway becoming a movie star, but not by adapting one of his innovative short stories into a film, but by appearing in a Warner Bros. gangster picture. That seems roughly equivalent to seeing Japanese novelist Yukio Mishima playing a yakuza in Yasuzo Masumura's colorful crime film for the Daiei studio. Mishima is a rough equivalent for Hemingway in his volatile and ultimately suicidal mixture of sensitivity and machismo -- which is all well and good if you've heard of Ernest Hemingway. Otherwise, let's talk about a Japanese crime film.

Mishima plays a typical yakuza protagonist, a man just out of prison. Takeo Asahina has done time for trying to kill a rival boss, whose gang has tried to kill him in prison but took out the wrong man. Living up to the English-language title, Takeo is reluctant to leave prison at first and determined to lay low once free. But family pride goads him into making a stand -- after he dumps his showgirl paramour for her own protection. He strikes up a new relationship, which for him encompasses rape and pressuring the girl to have an abortion. Meanwhile, the gang war goes on, though it ends for Takeo in tellingly absurd fashion.

Afraid to Die puts style above substance, but don't get the wrong idea. Masumura isn't interested in set-piece action scenes or epic murders in the Kinji Fukasaku manner. What made it unusual for me was the milieu in which the director stages his yakuza plot. His movie has a dense, cluttered look to it that sometimes seems artificial in a Guys and Dolls way and at other times seems almost oppressively mundane. The feeling I got was that the movie was playing out in someplace more like the real world than like the generic yakuza-movie milieu. This is one of many movies that was debunking yakuza mythos before Fukasaku came along, but the way Masumura does it is to place his criminals in ordinary settings that diminish their mythic attitude. I can't immediately recall another yakuza movie I've seen that shows the gangsters in one of their most important roles, as strikebreakers. It doesn't get more unromantic than that, but having the clans compete to blackmail a pharmaceutical company that had botched a product test comes close. The overall effect is anti-epic, emphasizing how small-time Takeo, his allies and his enemies are.

I won't judge Mishima as an actor on one film in a language I don't understand, but he's convincing enough as a loser, which is what Takeo is. His final scene is clearly intended as an indelible directorial statement demonstrating how much of a loser Takeo or any yakuza really is. Continuing his strategy of embedding the gangsters in mundane settings, Masumura stages the final hit in a department store, in a maternity department. In an image worthy of silent comedy, Takeo meets his fate on an escalator, trying to stagger down while it carries him inexorably upward. He becomes a man on a treadmill, an icon of futility, and anything but the sort of man apart a yakuza man (or a yakuza fan) imagines himself to be. The scene is a stylistic exclamation point that reinforces the diminution of the yakuza by turning him into a kind of clown and a plaything of forces beyond his ken. Nothing else in the film really comes close to its visual inspiration, though I owe props to a bizarre nightclub scene featuring a surreally suggestive song -- in translation, at least -- about bananas. That number, the escalator scene, and Mishima's experiment in acting make Afraid to Die a curiosity at the very least. As an auteurial exercise in blending the lurid and the low-key, it's somewhat better than that.

Oh, what the hell. Here's a song about bananas -- you'll be able to tell that much even without English subtitles. Use your imagination and translate it yourself. Thanks to noutnoutnoutnout for uploading it to YouTube.