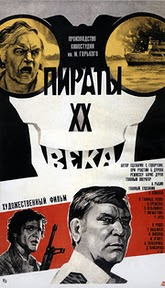 Among the stuff you'll find when you look for free feature films online is a trove of English-subtitled Russian films from the Soviet era and beyond. Mosfilm has its own YouTube channel, while the "PyccoTypucmo" (pronounced "RussoTurismo") channel has even more titles, including Boris Durov's action hit for the Gorky Film Studio (watch it here), a rugged adventure film that compares respectably with grindhouse movies from the capitalist world. Apart from a certain flatness of characters, there's little to mark this as a Communist film, and I'm sure it wasn't made with any propaganda purpose in mind. Brezhnev-era Bolsheviks believed in entertaining folks, and Soviet Man appears to have been entertained by the same stuff that pleased his bourgeois counterparts: violence towards men and women, violence by gun, knife, foot, fist and grappling hook -- the faster paced, the better.

At a few seconds short of 80 minutes, Pirates of the XXth century practices truth in advertsing by showing us modern-day pirates in action. But we start with a Soviet freighter, the Nezhin, picking up a boatload of medicinal opium, bound for Vladivostok and distribution to hospitals. The opening credits promise martial-arts action, as we see a crewmember practicing with his "numbchuks" and breaking boards to entertain his mates. This energetic routine is interrupted when the crew discovers a man adrift in the water. The rescued man, Saleh, speaks no Russian, but some of the crew speak English, and they learn that he jumped a ship whose cargo of cotton caught fire. Next, the Nezhin discovers a disabled ship, the Mercury. Its distress is a deception, as was Saleh's. As he creates havoc on the Nezhin, destroying its radio, pirates from the Mercury -- a crew of terrorists and mercenaries -- storm the ship, slaughter most of the crew, steal the opium and set the vessel ablaze. As the pirates zoom off, a handful of survivors, including two female crewmembers barely saved from drowning, pile into a lifeboat in search of safety.

Fortunately, the survivors find land before long. Unfortunately, they've stumbled upon the Mercury's base of operations. But that actually gives them a chance to recover the opium and bring the pirates to justice. With help from a native girl, the Russians capture weapons and manage to take over the Mercury. But the pirates have mined the bay to deter pursuers, and the Russians can't get out. Worse, their two hapless women -- if anything, the "progressive" Commies were retrograde, on this film's evidence, in their portrayal of women -- have been captured and subject to torture. Happily, the pirates are willing to negotiate and let the Russians leave with their skins intact, though without the opium. The sailors don't trust the offer, since they could obviously lead a navy back to the pirates' lair, but they go along in order to give heroic first mate Sergei (Nikolai Yeryomenko) a chance to take the villains down single-handedly and shirtlessly....

This is undemanding mayhem, impressively staged on locations and on the open sea with real ships. The action is often quite brutal, and the violence against the helpless females is just about as exploitative as anything you might have seen from the "free world," without the compensatory, quasi-empowering revenge. Again, if you think of the USSR as part of a generic global "left," you might expect more female empowerment here, but Pirates is very much an unapologetic "Men's Adventure" type of film, from the modern-piracy theme to the exotic backdrop for torture. It's also indelibly a Seventies film, as the disco-esque score will tell you right away. Wikipedia claims that this was the most popular film of 1980 in the USSR, and I imagine it must be an iconic movie for Russia's Seventies fetishists. It was a great find for me, if not a great film, because I'm always intrigued by what true pop cinema, as opposed to arthouse cinema, looks like in different countries. Pirates of the XXth Century probably isn't the face Soviet cinema meant to show the world, the cinematic commisars probably having something more refined in mind. But it shows us that, even at a low point in the Cold War, the years of the invasion of Afghanistan and the Olympic boycott, moviegoers in the communist and capitalist blocs -- or some of them, at least, spoke a common language.
Posted by Samuel Wilson at 11:37 PM