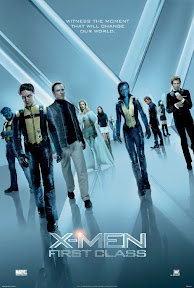 Every so often in Matthew Vaughn's latest comic-book movie there's a moment that has inspires the feeling the whole film was presumably aiming at -- the sense of destiny in disarray, the pieces visible but out of place and begging the question: how do we get from here to what I know? Most of those moments come whenever Kevin Bacon, playing mutant Mengele turned war provocateur Sebastian Shaw, parades around wearing a piece of headgear, designed for him by the Soviets to protect his mind from telepathic penetration, that everyone watching, movie fans and comics fans alike, recognizes as Magneto's helmet. The sense of backstory suddenly made strange is probably stronger for comics fans because, in comics, Sebastian Shaw is not a former Nazi, has nothing to do with Magneto's origin, and played no role in the formation of the X-Men. But as the usual leader of the Hellfire Club, a recurring clique of evil wealthy mutants with an 18th century gimmick (hence the name, presumably), Shaw was probably at or near the top of the list of villains X-Men fans were waiting to see in a movie. So here he is, however out of time and place, and his shoehorned presence is typical of the a la carte approach taken by Vaughn and his co-writers in cobbling this prequel together. The result is a superhero picture that has little of the crazed vitality of Vaughn's Kick-Ass. Instead, First Class (which has nothing to do storywise, need I add, with the comic book miniseries of that name) is an awkward, mispaced mix of whimsy and obligation, an overlong series of variations on required themes and motifs without a real life of its own.

The deal is this: while little Charles Xavier grows up wealthy and privileged with his virtually-adopted little sister Raven Darkholm, the future Mystique, little Erik Lensherr endures the Holocaust in the custody of Klaus Schmidt, the future Sebastian Shaw -- a mutant hiding among Nazis and searching for more of his kind to experiment on. Seeing Erik bend a metal gate in a fit of panic, Schmidt hopes to induce another display of power by threatening the life of Erik's mother. Alas, Erik can only perform after the fatal shot is fired, wrecking Schmidt's lab and crushing guards' heads under their helmets while shouting "NEINNNNN!!!" -- but somehow, he doesn't seem to think of killing his actual tormentor. He'll get to that as a grown man (Michael Fassbender) hunting Schmidt/Shaw and other war criminals. He happens to attack Shaw's yacht at the same time that a grown Xavier (James McAvoy) is trying to help the CIA learn Shaw's secrets, with a grown Raven (Jennifer Lawrence) tagging along. When Erik ends up out of his depth, Charles rescues him and the film's bromance begins. They join forces, in tense concert with a suspicious U.S. government, to probe the links between Shaw, his Hellfire Club, and the Soviets, who in this year of 1962 wax indignant over the placement of American missiles in Turkey. Shaw suggests stashing some Soviet missiles in Cuba, with the hidden hope that the superpowers will launch at each other, kill off most of humanity, and make the world safe for mutants. With the help of a primitive CIA mutant-detection device, Xavier puts together a motley team of proto X-Men, picked by the screenwriters from various periods of comic-book history with an eye for diversity and an impulse to old-fashioned expendable tokenism, to stop Shaw, while Erik (nicknamed "Magneto" by the new kids) is just out to kill the bastard. Bristling under U.S. surveillance and seduced by Shaw's dark-father "I made you" spiel, Erik isn't about to change sides, at least as long as Shaw is alive. But when the chagrined Americans and Soviets propose a preemptive strike on mutantdom assembled, all bets are off....

To be blunt, Bacon's helmet gives a better performance than Bacon does. He brings nothing to the Bond villain role designed for Shaw, and his lifeless smirk typifies the nearly total failure of First Class as a retro-stylized period piece. But I get the impression that it wasn't anyone's intention to hop on the Mad Men bandwagon here, despite the presence of January Jones as an inexcusably affectless Emma Frost. It's only an accident of math, after all, that Xavier and Magneto are the age the writers wanted them to be, based on the ages of the characters in the 2000 X-Men movie, in the early 1960s. Even so, the production should have made more of an effort than it did. Anachronistic clothing, hairstyles and dialogue (I don't think anyone was a "badass" in 1962) abound, and the soundtrack is thoroughly unevocative of the period. The film's few attempts to turn Charles and Erik into something like swinging bachelors are pathetic, and these scenes, like many gratuitous bits of power-discovery and training, sap First Class of practically all urgency. One can't help agreeing when Hugh Jackman manifests just long enough to tell these two to go fuck themselves. Playing these dolts, McAvoy and Fassbender are mindboggling overqualified, yet utterly at a loss when challenged to make their characters anything more than overdetermined cliches. They're trapped by what the characters have to be, what we've already seen of two old men in three movies, and they can do nothing more about it than grimace, grunt and cry "NOOOOO!!!" just like any other genre actors. While some comics purists will protest that First Class is unfaithful to official history or actual published books, its real failing, even as it manages to be mildly entertaining and occasionally energetic, is that it doesn't break free of even the cinematic past. It didn't free the actors to make something new of their roles, and it didn't free the audience to see this movie as a new beginning rather than a dead end.
Posted by Samuel Wilson at 7:09 PM