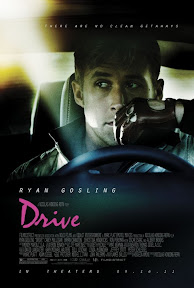 Late as I am to the party, I'm probably saying nothing new if I mention that Nicolas Winding Refn's new thriller, which has become perhaps the most divisive movie in the blogosphere this year, is very much a backward looking film. If anything, commentary to date has understated Drive's retrospective scope. Masters of the obvious note the film's debts to crime cinema of the 1980s, particularly the works of Michael Mann and Walter Hill, and Mann provides a jumping-off point to trace Refn's influences back to Jean-Pierre Melville, a fellow European. But we can go further back yet. I saw hints of Robert Aldrich's Kiss Me Deadly in the hero's nighttime shoreline showdown with an enemy, for instance, and that takes us back to the 1950s. Beyond that, this is a film so soaked in history that Frank Capra's grandson is one of the producers. But let's draw the line at Capracorn; Drive has none of that, though its hero is, for all intents and purposes, a John Doe. Nevertheless, the Capra family tree takes us all the way back to the silent era, and in the skeleton of its story and its aspirations to pathos, Refn's film, adapted by Hossein Amini from a James Sallis novel, is like a silent film -- like many a silent comedy, to be more precise. A nameless denizen of an underworld pines for a woman and the family life she embodies, but renounces his desires, first to secure a future for the woman and her husband and then, after that doesn't quite work out, solely for the sake of the woman and her son, before he hits the road one more (or last) time -- but not until some spectacular gags (as movie stunts are often called) take place. I don't mean to say that Drive is funny -- it's not even unintentionally so. But it's more evidence for my contention that the modern action film evolved from silent comedy (Buster Keaton's The General being the proto action film). Everyone notes that the anonymous driver, whom I'm tempted to call Scorpion for the design on his jacket, has little to say in the picture, but they trace that to Mann and Melville's brooding antiheroes. I'm just saying you can go much further back to sound the depths of Drive's influences. But to get to the meat of the matter, you might not have to go so far back in time. Refn may have tipped his hand slightly when he (or Cliff Martinez, who's credited with the soundtrack) went to the Tarantino well to score the scene where a masked Scorpion lurks outside a restaurant where Ron Perlman's gangster is partying. I feel certain that I alone in the afternoon audience recognized those lyrics as they played, and I practically marked out. Let me show you why. Take a look at the first three minutes of this clip that dmovie27 uploaded to YouTube.

Riz Ortolani wrote that tune for the late Gualtiero Jacopetti's 1971 magnum opus Goodbye Uncle Tom, a time-traveling trip to the days of slavery in all its squalid and intimate cruelty. Ortolani made a specialty of composing soaringly romantic music that served as counterpoint to cinematic brutality, the other great example of his approach being his sublime theme music for Ruggiero Deodato's Cannibal Holocaust. Including Ortolani on the Drive soundtrack is arguably an assertion of the actual "European" character of Refn's film, as opposed to whatever Albert Brooks's film producer-turned-gangster means when he notes contemptuously that critics had called his '80s action films "European." Like many Euro directors and composers, Jacopetti (with Franco Prosperi) and Ortolani juxtaposed soundtrack lyricism and visceral violence in a manner that remains offputting to many Americans. Likewise, some American reviewers this month have been taken aback by a sudden eruption of ultraviolence in Drive after a relatively non-violent first half. I can understand the objections to some extent because it comes as an abrupt shock, not that the story turns gory, but that Ryan Gosling's driver proves so capable of extreme brutality. It's not that he's too pretty or too bland to be a killer, but that he appeared to have been established as not a killer, just a driver. Had he been shown as a man of violence from the beginning -- had he played a hitman rather than a driver, and had the ultraviolence been a constant rather than a sudden change in the picture -- the violence wouldn't have the jarring and in some cases deal-breaking effect it's had so far. But there seems to be a point to the violence arriving late and suddenly. The scorpion on Gosling's jacket tells part of the story. He alludes to the fable of the scorpion and the frog at one point, but the script assumes our knowledge of the tale, which in moviedom is most identified with Orson Welles. In the fable, the scorpion invites the frog to ride across a stream on his back, despite the frog's fear that the scorpion will sting him. In midstream the scorpion does sting him, which seals his own fate as well. As the frog protests and they both sink, the scorpion reminds him that stinging is simply his nature. In Drive, the driver's (or Scorpion's) nature is violent, even if he could hope otherwise and dream of Hollywood stuntwork, stock car racing, or the love of a good woman. Violence marks the nameless man as the permanent outsider who can never have a settled life, just as it often marked the silent clown who could never avoid trouble with the cops or miss an opportunity to wreck stuff.  The synthesis of aspiration and disillusion is pathos, and pathos is one thing Drive has that can't be traced to the Eighties.

For Refn, as for his European (usually Italian) forebears, extreme violence is a kind of reality principle that subverts the idealistic mood of their films' upbeat, romantic music. A perverse kind of pathos evolves, for instance, when Ortolani uses a more insistent, rocking instrumental of his Uncle Tom theme to score a horrific rape scene. Drive's violence serves the same disillusioning yet deliberately pathetic purpose. We ought to note that the violence here isn't as extreme or blatant as it could be. When Scorpion stomps someone's face in, we get one horrifically suggestive shot when bone appears to cave in, but Refn doesn't keep his eye on the destruction the way Gaspar Noe does when a man's face is staved in with a fire extinguisher in Irreversible. There are other moments when Refn turns or cuts away from the worst we could see. That may have been to avoid an NC-17 rating, but it also tells us that the violence isn't really an end unto itself. It simply signifies the irreconcilability of Scorpion's world with the world he longs to join. Drive isn't a gore film, but a thriller, and it works well as that. Refn (who supposedly doesn't know how to drive himself) stages a number of nice old-school car chases as well as tense moments of pure waiting and anticipation. It has a couple of charismatic yet convincing villains in Perlman (whose buffoonish brute made me think of a Will Farrell assembled from dead bodies) and the stunt-cast Albert Brooks, who continues an honorable tradition of comics-turned-heels that recognizes an inherent viciousness in comedy. As the object of Scorpion's adoration, Carey Mulligan may as well be Edna Purviance, but that's not a rip on the actress; it's just the nature of her role. As for Ryan Gosling, I'm not sure yet whether I really liked his performance or not. He doesn't really look the part, though I'm hard pressed to tell you what Scorpion should have looked like. I guess I can't shake a feeling that Gosling's benign-bordering-on-bland visage is part of a cheat on the film's part, a concealment of its true nature -- but on the other hand, Gosling's character is practicing a kind of self-deception when he dreams of domesticity and fatherhood, though we may not realize this as soon as we should. On some level he's a cypher, on another a pathetic striver, almost Keatonesque in his taciturnity. He's at his most chilling when he covers his already-sort-of masklike face with an actual mask, the bald movie-star mold (Vin Diesel?) he wears when stunt-driving, to become a Michael Meyers-like stalker -- and maybe that scene, in which he drives his enemy into the sea like an implacable figure from some other fable, shows us the driver's true self. That scene is eerily evocative and one of the best in a picture that has a multitude of powerful moments but may not quite add up to the sum of its parts. Few films released this year have been as potently evocative as this one, though, and my experience proves that you don't have to be enamored of Eighties cinema or Eighties culture to enjoy Drive.
Posted by Samuel Wilson at 11:14 PM

Seems like we both have a similar summary judgement Samuel, though we seemed to have reached each traveling different avenues. I loved Cliff Martinez's elegiac and foreboding score (I neither found it romantic, nor realized the deptedness to Ortolani, but on the latter point I appreciate your expertise on that front) I also don't see DRIVE as a thriller as much as I do an existential tone poem and mood piece that embracing some thriller elements. I am happy to say too that I am not of theMaster of thebvious" fraternity, since I am contending Lynch much more than Mann here. Ha!

But I must say I like that silent film connection, Purviance/Mulligan etc.

You've brought some great ideas to the table here!

Sam, let's split the difference and call it an existential thriller. I noted your Lynch invocation over at Wonders in the Dark, but I wouldn't say Drive is Lynchian, but that Lynch taps into some of the same older, "European" veins that Refn does, infusing violence with emotion rather than confining it in cool.

Ha Samuel, you got a deal!!