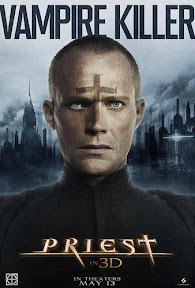 Before anything else, we owe a shout-out to Coach Steve Niles and his vampires for laying the undead smack down on the zombies on Deadliest Warrior last week. They really showed Max Brooks and his "unstoppable virus" who the apex predators really are! But now for something completely different: Scott Stewart's extremely loose adaptation of Hyung Min-woo's graphic-novel series and the second teamup of the director and actor Paul Bettany. They first joined forces for 2010's Legion, a film my friend Wendigo liked more than most people did, and on the strength of that Wendigo was ready to give Priest a chance when it hit DVD. Cory Goodman (who has gone on to write the current release Apollo 18) took the Korean comics' core idea of holy warriors fighting supernatural menaces in the Old West and turned it into a multi-genre homage that eventually manages to take on a life of its own. 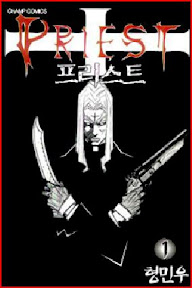 As an animated history explains, on this alternate reality "There has always been man, and there have always been vampires." The two species have been at war from the beginning, and despite the vampires' advantages in strength and speed humanity managed to develop technologies of mass destruction to destroy the vampires' hives. But the tide didn't turn until the emergence of the Priests: a co-ed order of vampire slayers who somehow acquired the strength and speed to beat the enemy in hand-to-hand combat. Wendigo and I spent the picture waiting for some big explanation of how this was possible; perhaps something to do with vampire blood or something similar. But the most we learned was that the Priests learned how to "focus." If you focus, for instance, you can leap through the air and use the stones tossed by another Priest (and that's probably important) as stepping stones for leaping higher still in order to engage the enemy. In other words, their powers make no sense at all -- but this is a fantasy world, so deal with it.

Anyway, at a certain point the Church declared victory and disbanded the Priests, who wander about their Blade-Runnerish "retro-future" cities without practical job skills or prospects for the future. That's the plight of our title Priest (Bettany) until he gets word that his brother's family has been attacked at a frontier settlement out west. Suspecting a vampire revival, he defies religious orders to venture out, only to find his brother (Stephen "True Blood" Moyer) on his deathbed and his niece kidnapped. Accompanied by a local lawman (Cam Gigandet) with a crush on the niece, the Priest embarks on a search for the girl, with the understanding that he'll kill her, despite the lawman's objections, if the vampires have turned her into a subhuman "familiar," or worse.

Our heroes find evidence of an impending vampire uprising, including a train-borne assault on the eastern cities, now in a state of perpetual night, in order to wipe out mankind. There's a human brain behind the plan: a fallen Priest (Karl Urban) who'd once been part of Bettany's team but had been captured by vampires and fed their queen's blood. That made him a unique "human vampire" who can daywalk and bare a couple of modest fangs with a smile. Aided by a Priestess (Maggie "Nikita" Q) who'd been sent to stop Bettany but has tender feelings toward him, the good guys have to stop that evil train from reaching the cities and save young Lucy, who's more closely related to Bettany than he first let on....

Wendigo had the liberty of knowing little about the Priest concept before watching the movie, so there were no expectations to be violated or disappointed. Legion created a certain expectation of action that the film fulfilled easily, and Wendigo expected Stewart and Bettany to offer a different take on vampire hunting, if not vampires themselves. Different it definitely was.

Wendigo had never seen vampires like the ones in this film. They're quite inhuman: sightless, fewer fingers, no apparent individual intelligence, and a variety of subspecies (warrior, guardian, queen, etc.) Stewart explains on the DVD that he wanted to make vampires scary again, but Wendigo thinks that the director went too far by reducing them to little more than animals. Intelligence is what makes vampires scary most of the time, but there was little frightening about Stewart's creatures. They're little better than fast zombies in that regard. They look interesting, but that's about it -- except for the human vampire "Black Hat."

The part was a bit of a step back for Urban, who relied on a lot of the bombast he brought to his Julius Caesar character on Xena:Warrior Princess. But his attitude keeps the character entertaining as a villain. Even with him, Wendigo was unclear about whether the plan to invade the cities was the ex-Priest's idea or something implanted by the batlike vampire queen. The former seems likely, since the film shows vampires faring quite poorly against just two Priests, plus a retro-future cowboy. On top of his master plan, Black Hat has an agenda of revenge against Bettany, who he still blames for letting him go in that past crisis and letting the vampires get him. He also has a more vague grievance against the Church that made him a Priest, as do the Bettany and Maggie Q characters. There's a Nam or Iraq vet subtext here in the film's portrayal of exploited and abandoned traumatized soldiers that might have been developed further -- how are Priests recruited and trained, and how old do you have to be or can you be to become one? -- but the film is what it is.

Scott Stewart clearly sees star quality in Paul Bettany, even as he arguably condemns the still-respected character actor to genre hell. Wendigo understands what Stewart sees in the actor; Bettany has an interesting look and he's a plausibly formidable physical presence. We agreed that, in this role, he looked like he'd stepped out of the pages of 80s-vintage Heavy Metal. Stewart admittedly doesn't give Bettany much emotional range, but that probably comes with the genre territory -- though Wendigo asks why, in this fantastical world, Bettany couldn't speak in his natural accented voice, while slumming Christopher Plummer could?

While Stewart may be unintentionally dragging Bettany down, he catches Maggie Q on the way up. Wendigo has seen some Nikita episodes and finds her an interesting actress with a different enough look to give her characters character. This picture gains some extra life when she arrives. Of the three heroes, Cam Gigandet as the lawman is no more than a bland audience-identification character, with no more purpose than to follow in the steps of Jeffrey Hunter.
Wendigo hadn't seen the reviews when Priest was released, but he is a Western fan, so he recognized early how the film was imitating the plot and character arcs of John Ford's The Searchers, with Bettany in the John Wayne role as the pursuer torn between rescuing and destroying his kin and Gigandet as the sidekick fighting for mercy. It's an interesting gambit but one the writer can't follow through on, since we can't have Lucy "living with a buck" the way Natalie Wood lives with the Indians in the great Western. Bettany can't face the dilemma of whether or not to kill his "tainted" kin, because were the girl tainted in this context she'd have to be killed. This deprives Bettany of levels of indignation and personal conflict, reducing him to his default mode of sullen grimness. Writer and director press on regardless, and a deleted closing scene is probably the most blatant homage possible, with everything but Bettany with hand on arm as the door closes on him.

We don't really have anything to say about Brad Dourif's character, but we include this picture because he's Brad F'n Dourif, and because we can.


But The Searchers is just one of the elements jumbled together in the genre cuisinart that is Priest. At its delirious best, Stewart's film is an insane mashup of post-apocalypse, dystopia, western, Spaghetti western, and vampire hunting. At any given moment we might recognize The Searchers, or Blade Runner, or Once Upon a Time in the West, or The Road Warrior -- or in my case, even The Good The Bad and The Weird. But Wendigo reminds me that I needn't make a long list of genre influences, because there's one word that sums it all up. Priest, he says, is steampunk -- a word that Scott "retro-future" Stewart can't bring himself to say. Now that he knows more about the Korean comics, Wendigo is more indignant about the Americans' disregard for the source material. But on its own terms, which are the ones we have to accept, he finds the Priest movie an effective, exciting action film, though not an improvement on Legion -- he just loves those archangels. But he won't recommend it to vampire buffs, since it won't really push their buttons much. For my part, I found this hard going for the first half as cliche followed cliche in tight formation. Once it hit its energetic stride in its last half-hour, though, it became quite fun to watch for its crazy synthesis of genres. It's nothing great, but it got better as it went along. Not all films do that, so let's give Priest some credit.
Posted by Samuel Wilson at 11:20 PM