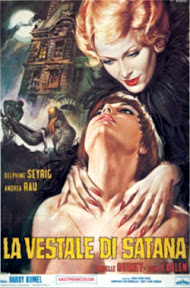 It's been more than a decade since I last showed my friend Wendigo Harry Kumel's Euro-vampire film, which I'd just bought on VHS in a letterboxed director's cut. Wendigo remembers being disappointed with the film. He'd expected more sex scenes with more overt lesbianism and a greater resemblance between Delphine Seyrig's "Countess Elizabeth Bathory" and the legendary Blood Countess whose name she bears. I'm to blame, in part, because I'd talked it up pretty big based on what I'd read about the film in the fan press. Now, however, Wendigo wanted to appraise it as a vampire film, not a cult sex film. While some of its flaws are still pretty obvious, he finds that he appreciates the movie more on a second viewing. 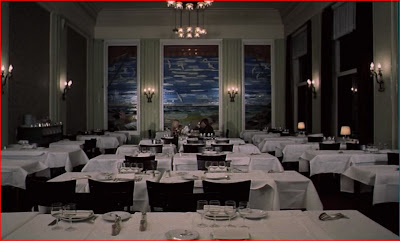 It was this or the Overlook: Daughters of Darkness's honeymoon hotel. 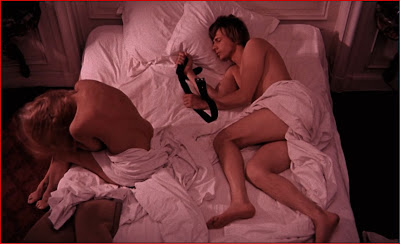 Kumel's subject is one of the world's worst honeymoons. Stefan (John "Willie Loomis" Karlen) and Valerie (Danielle Ouimet) are just married and staying uneasily at a hotel in the seafront town of Ostend. It's off-season and the hotel is largely deserted, except for the late-arriving Countess Bathory and her sullen companion Ilona (Andrea Rau). The concierge recognizes the Countess but can't believe his eyes; she's the spitting image of a woman who stayed at the hotel forty years earlier. To Valerie's dismay, Stefan and the Countess share a lurid interest in her namesake, the reputed murderer of hundreds of girls in the name of eternal youth. That's just the latest thing to bug the new wife; it also irks her that Stefan won't take her to meet his mother -- we learn later that he has good reason for his reticence. This early alienation between man and wife makes both appear vulnerable to the Countess, who stokes Valerie's jealousy while ordering a reluctant Ilona to seduce Stefan. Ilona would clearly rather bite the man's neck, but she'd also rather be free of the Countess. Freedom, such as it is, comes when she freaks out in a shower and manages to kill herself with a straight razor. At that point, Bathory makes her play for her real target, Valerie.... 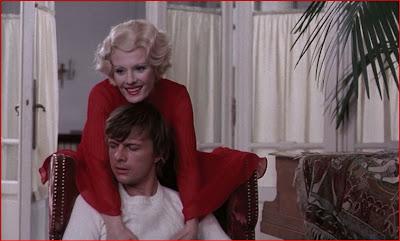 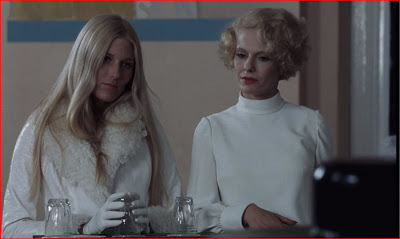 Countess Bathory (Delphine Seyrig) has a choice of targets to try her Dracula moves on. 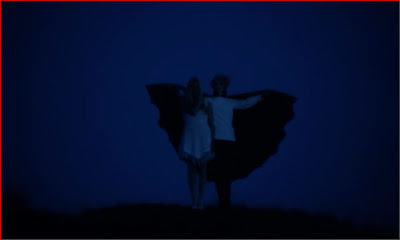 Wendigo deems this a relatively uncharacteristic Euro-horror, until the very end. It had a strong, linear, character-driven storyline for a European film, with little in the way of "dream logic" and music that actually seemed to fit the mood of the story, but it has what seems to him a typical Euro finish: an abrupt act of violence followed by an illogical epilogue with a twist that makes no immediate sense.  For the most part, however, Daughters strikes a healthy balance between style and "substance" (character development, plot). Much of the substance comes from John Karlen's performance as a selfish, dishonest, abusive person who struck Wendigo as more evil, in some ways, than the vampires. Stefan is a bigger, more habitual liar than the Countess, who after all has just one big secret to keep. He quickly proves himself an unfit husband and in a way as much a threat to Valerie as the Countess is. You can see why it wouldn't take much prodding for Valerie to choose Bathory as the lesser of two evils. 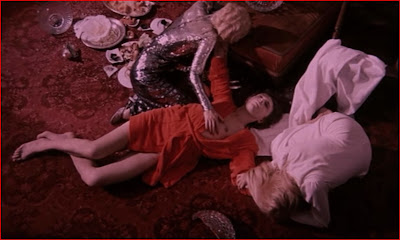 Daughters makes no great strides in vampire mythos. The vampires bare no fangs and make no transformations, but they have several traditional vulnerabilities, particularly to sunlight and, as Ilona proves, to running water. Wendigo believes that this is the first time a vampire has been defeated by throwing her under a shower. There's very little blood drinking, and the little we get comes late in the game after a slow build-up of suspense that makes the moment more dramatic. Wendigo notes that Euro vampire movies generally aren't fetishistic about displaying vampire powers. Too often in Anglo-American films you can imagine the writer or director marking off their checklists of abilities displayed and effects deployed. By comparison, the Europeans tend to take supernatural powers for granted without needing to make a big deal out of their use, or they take an eccentric approach to them like this film's play with mirrors. The Countess can use mirrors, and we see her hands reflected, but we never see her face in the glass. You notice that enough to wonder what you might see there if you had the chance. 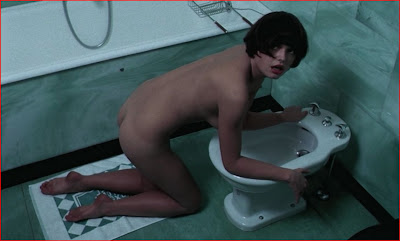 The glamorous life of the vampire; Ilona gets the dry heaves. 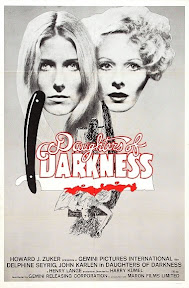 With a strong ensemble cast and patient plot development, Daughters now impresses Wendigo as an above-average vampire film that he can recommend readily, albeit with reservations. He did not find it "slow," as some online reviewers have; maybe he's grown more patient with age. If the film has a grave weakness, however, it's Kumel's direction of action, particularly the three violent death scenes. Ilona's death by straight-razor impalement (?), Stefan's double wrist-cut by the halves of a broken bowl (??), and the Countess's car-ejection (from the back seat) and tree-impalement are all implausibly and ineptly staged. We're not sure why these scenes play so poorly; having seen no other Kumel films, we can't say if he has a chronic weakness or a problem with this particular script. Maybe it's a mark of art that you can't do action well, but we doubt it. But since Daughters of Darkness isn't primarily an action-horror film its lapses, however laughable, can be forgiven. It remains an intriguing and attractive film of disturbing beauty, even if some of its transgressive element has been lost over time. Don't expect too much in the sexual or sapphic line, but do expect a sensuous shiver or two.

Here's a slightly repetitive and spoilerish English-language trailer, uploaded to YouTube by KXKWarriorV.

more of a movie for movie critics than movie goers; at least movie goers who even in 70s wanted 70s action over art.

I like this one quite a bit. I especially like the scene where the Countess details her past and in a couple of minutes derives far more disgust and pure horror than the whole of Hammer's go at detailing the Countess. There's a new movie either out, or coming out called BATHORY if I remember right. The trailer is online and it looked good.