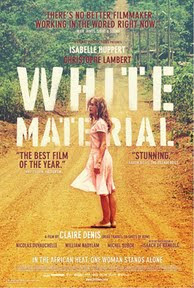 Forty-five years ago, the late Gualtiero Jacopetti made Africa Addio, a controversial documentary on the violent consequences of the European withdrawal from Africa. On the evidence of Claire Denis's fiction film of two years ago, the brutal process described by Jacopetti is still going on, and it wouldn't surprise me if she, like the late Mondo maestro, has been accused of racism for portraying Africa, or one particular francophone patch of the place, as a dystopian killing ground. But her film happens to be about Europeans who have stayed on, and one in particular who'd determined to stay on past the point of common sense. The theme seems to be misplaced loyalty, since Maria (Isabelle Huppert) doesn't really have a stake in the Vial coffee plantation, which is owned by her former father-in-law. But somehow she's ended up running the place, since the old man's gone feeble, the ex-husband's a schemer and her son is shiftless before he goes crazy. But she knows no other life than the plantation, and she's determined to get the latest crop in despite a civil war, the withdrawal of French military protection and the mass flight of her regular workers. Everyone else seems to realize that time is running out, but all Maria knows is that, as long as there are five days left, she can get the crop in. The plantation could well become a battleground between government forces and rebels loyal to "The Boxer," a charismatic but wounded leader who just happens to be hiding out on Vial land, as are some straggling child soldiers who pose a constant threat to everyone.

All sides seem to be waiting for just the right opportunity to pillage the plantation, but Maria stubbornly refuses to give up on it -- that'd be like giving up on her lazy, tatted-up son, who's bad enough before the child soldiers catch him. They only steal all his clothes, but that's enough to turn the lad into a gun-toting skinhead who tries to stuff his freshly cut hair down a maid's throat and ultimately betrays the Boxer to the government. A bloodbath and inferno ensue just as Maria struggles to get back home....

Above, Isabelle Huppert regards an airdropped surivial kit with disdain. Below, she's probably regretting that decision right about now.

White Material is strong stuff, an unflinching look at a country, if not a  continent, descending into chaos. This is the first film I've seen from Claire Denis, who's considered one of the top French directors of this generation, and it made an impressive first impression. She has an eye for atrocity and a classical pictorial sense. She portrays much of the violence and bloodshed indirectly or symbolically. When soldiers skulk quietly through a home slitting the throats of doped-out child soldiers, we don't see the cuts, but we see the spray of blood on the inside wall of a bathtub, and we see the bathwater turned red. In an abstract sense the most violent image in the whole film is the sudden appearance of a severed goat's head in a pile of coffee beans like a mythological omen of doom. But there's one moment that's arguably more violent for being more shocking, but as it's meant to come as a shock I can't really elaborate on it. Suffice it to say that, shocking as the film often is, that last bit will probably shock you afresh.

Isabelle Huppert gives a commanding lead performance -- she actually instigated the project by suggesting that Denis adapt a Doris Lessing novel, though the story eventually used is original -- that emphasizes Maria's forceful personality without contradicting the director's underscoring of her essential vulnerability. While Maria may come across as futile of foolish, she doesn't come across as crazy or stupid. I suppose that makes her a tragic heroine. Meanwhile, the biggest surprise of the film from a Mondo 70 perspective is the strong performance given by none other than Christopher Lambert, the old highlander himself, as Maria's ex.

It's ironic casting given Lambert's past casting as Tarzan, but it's also not the sort of film an American expects to see the poor guy doing. I don't know if this was seen as a comeback role in France, but it certainly goes some way toward re-establishing Lambert's credibility in A or arthouse pictures -- and it's certainly a better role than he might get in any American comeback vehicle -- he is, in fact, rumored to be appearing in The Expendables 2, just to show you what I mean.

Watching A Screaming Man last week revived my interest in African cinema and piqued my interest in Denis's film about Africa. I suppose it'd be a fair hit to accuse her of objectifying Africa or not giving enough space to an authentic African viewpoint that could contextualize the mayhem without making the continent look barbaric. But White Material is less a commentary on Africa (in the debatable manner of Africa Addio) than a portrait of a European in Africa or, more generally, a character study of someone who feels a sense of belonging to a place where the feeling isn't mutual. It's about alienation imposed upon an individual who can't alienate herself from a situation even when it might be in her best interest. In that sense, it could take place anywhere -- and if the world keeps up as it seems to be going, it might.
Posted by Samuel Wilson at 6:20 PM

Samuel, I was surprised to hear this was your very first Denis film, but am heartened by the wonderfully appreciative response. WHITE MATERIAL came out right after 35 SHOTS OF RUM, which is equally essential. WHITE MATERIAL is certainly a chilling and harrowing film, and very much a continuation of Denis' incredible streak of resonant works with the upper etchelon of world cinema mastery. It follows up on the colonial African settings that served CHOCOLAT and BEAU TRAVAIL so effectively, but what with it's extensive use of flashbaks, elipticle narrative and fractured chronology it's a far more abstract work. Denis, much like Michael Haneke, specializes in the unamed country theme, always preferring to accentuate the universality of her themes.(oddly enough I am not sure if you would wholly agree, but I did find some interesting thematic kinship between this film and TIME OF THE WOLF). Tindersticks' music here contributes mightly to the disonance and the mood. And Isabelle Huppert adds a memorable chapter to her storied career.

Beautiful review. I can't wait till you get to more Denis.

Sam, the Albany library does have 35 Shots so I'll certainly take a look at it soon, and I've heard a lot of praise for Beau Travail. The setting of White Material could be any number of former French colonies from Chad (see A Screaming Man and Daratt) to Cote d'Ivoire, but now that you mention it, Denis didn't mention the place by name. That was probably smart.