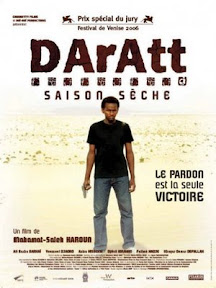 On the evidence of two of his five feature films, the Chadian director Mahamat Saleh Haroun makes modern fables for a war-torn continent. His stories simple and accessible. He has a modernist pictorial sense with an eye for the way a patch of color will stand out in a drab setting, but his narrative style in its eschewal of flashbacks or manipulative twists has the stark austerity of classical silent film. Daratt ("Dry Season") is a story that could have been told about America after the Civil War or any place or time when the impulse for revenge grapples with the need for reconciliation.

While Chad will be at war again at the time of Haroun's latest film, A Screaming Man, Daratt finds the country winding down a conflict. It isn't winding down to everyone's satisfaction, however. One village is outraged to learn that the country's truth and reconciliation commission has recommended against prosecuting alleged war criminals. A blind elder orders his grandson Atim (Ali Bacha Barkaim) to go to the capital and kill a man named Nassara, who had killed the father Atim never knew. 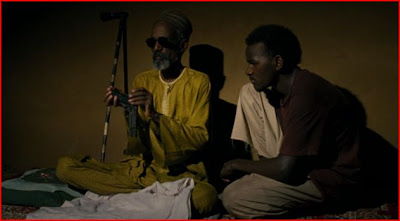 As a civilian, Nassara (Youssouf Djaoro of Screaming Man) runs a bakery. After stalking him awhile, Atim confronts his target during his morning distribution of day-old loaves to the neighborhood poor. Nassara assumes that Atim's just another charity case and offers him a loaf. Atim takes a couple of bites and spits them out contemptuously -- but doesn't shoot the baker. He comes back the next day to tell Nassara that he doesn't want charity, but a job. 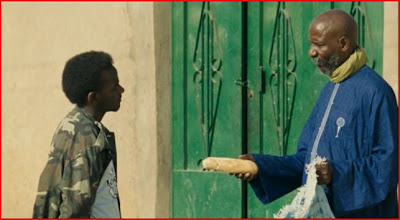 From here things get fairly predictable. Nassara becomes the first true father-figure Atim has known, while Atim begins to seem like the son Nassara hasn't yet had -- though his wife is expecting. The men have some character traits in common. Both are quick-tempered -- Nassara warns Atim that he can be dangerous when angry, while Atim repeatedly quits or spurns Nassara at the slightest provocation, only to return every time. Nassara is no ogre of a war criminal but a vulnerable man, forced to use a voice-device due to a slit throat from long ago and challenged by a rival baker with a truck. Atim is no relentless avenger -- having not known his father, his mission is more a matter of obligation than passion. Still, he rebels at every hint that Nassara might be a father to him, especially after Mrs. Nassara loses her baby, and Haroun keeps us in suspense throughout over Atim will finally do.... 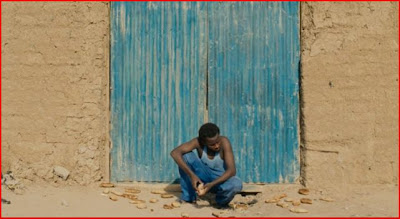 The ending may strike viewers as implausible in one way or another, but Daratt works overall as a parable of reconciliation. Djaoro marks himself as an actor to watch with his two films for Haroun. Barkaim faces a challenge as the moody Atim, but he convinces us of the character's seething conflict of emotions. Visually, Daratt is an exercise in tone and texture. I find Haroun's placement of color -- the blue of the bakery door, patches of green elsewhere -- against sunbaked walls nearly as entertaining as the drama of Atim and Nassara. Haroun's are films about poverty that are also visual treats. They're windows into a world we should all know more about, and discoveries like these are what global arthouse cinema can sometimes still be about.
Posted by Samuel Wilson at 10:28 PM