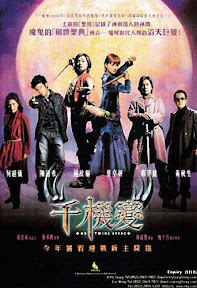 Available this month on FEARNet on-demand is an edited-for-America edition of the most popular Hong Kong film release of 2003, a star vehicle for the hot pop duo Twins, whose members are not related to each other. It seemed like a good opportunity for my friend Wendigo to see his first Chinese vampire film -- not counting The Legend of the Seven Golden Vampires. But the film, co-directed by Dante Lam and Donnie Yen, proves not to be a "Chinese vampire" film. The nation's signature hopping menaces are nowhere to be found. Instead, we deal with "European" or European-style blood-drinkers, even if our lead vampire, Prince Kazaf (Edison Chen), is clearly Asian. He's the youngest son of the King of the Vampires and is just establishing himself in Hong Kong, in an abandoned Christian church, against the objections of his aide-de-camp Prada (Anthony Wong). The fear of holy symbols is passe, Kazaf insists. 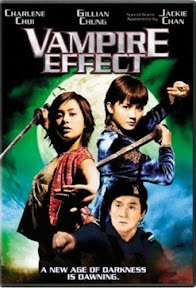 Kazaf seems blithely unaware of the local efforts of the Anti-Vampire Federation, whose ace slayer Reeve (Ekin Cheng) has just lost his partner to a particularly brutal attack. The Federation sends him a new assistant, Gypsy (Gillian Chung), who somehow seems completely ignorant of vampire lore and the basics of vampire fighting. For her and our benefit, Reeve explains that slayers gain super strength and speed by drinking an extract of vampire blood, and must take an antidote within a certain time or else turn into vampires themselves. Gypsy gets off on the wrong foot with Reeve's sister, Helen (Charlene Choi), who's just broken up with her latest boyfriend. The two women fight over a giant stuffed bear that Helen has trashed because it reminds her of the boyfriend. Their fight escalates to a martial-arts battle with poles, with the presumably untrained Helen more than holding her own against the junior slayer.

At a nightclub, an angry Helen snatches a drink off someone's table and drains the glass. The glass was full of blood, and belonged to Kazaf, who scrupulously drinks blood and never sucks it. He'd politely tried to warn her, but he's impressed, smitten in fact, by her brazen fearlessness and overall cuteness. Even though Prada warns him not to play with "food," the prince asks her out on a date, cluelessly setting it for mid-afternoon. A hastily-concocted sunscreen saves the day. But while this mismatched couple fall deeper in love, the vampire civil war you might have read about on the news, like Reeve did, comes to Hong Kong. Duke Dekotes (Mickey Hardt), the most European of vampires, has killed the king and Kazaf's elder brothers, and now wants to kill the youngest prince, take his essence, and use it to open the Day For Night, the ancient book of vampire secrets that will allow Dekotes to walk by day without looking like an actor in bad blackface. Kazaf's first inkling of this is the failure of his weekly shipment of premium bottled blood to arrive from Dad. The Duke's minions killed Reeve's previous assistant, and his reign of terror will force an unlikely alliance -- not Reeve and Kazaf, necessarily, but definitely Gypsy and Helen.... 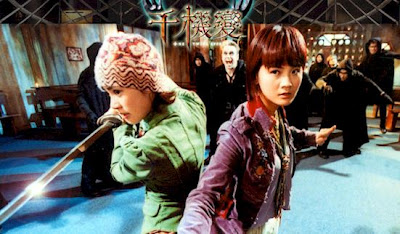 Wendigo was probably more worried about this film being a vampire comedy than it being a Chinese film. As it turned out, he feels that the Hong Kong talent brought some interesting ideas and effects to the vampire genre. He was impressed both by the stuntwork and the effects that make the vampires and vampire-fighters capable of incredible feats of leaping and climbing. He liked the mix of makeup and CGI that differentiate the vampires, Kazaf and other "good" vampires having just two Dracula-style incisors while the Duke's "evil" vampires have fully fanged sharkgrins. The dusting of vampires and the Duke's transformations into a massive bat-creature also impressed him. Conceptually, there's nothing particularly original here, but Wendigo found the backstory an interesting blend of the obvious Buffy influence (female slayers as ditzes) and some less obvious borrowings from Blade (an empowering artifact activated by vampire essence, the risk of the slayer transforming, etc.). The concept of gaining powers from a vampire serum has been seen elsewhere, but Wendigo suspects that it might resonate particularly well in China, given the country's alchemical traditions.

As a vampire comedy, Vampire Effect is at least more tolerable than many we've seen in our series. It often tries too hard to be comical, going so far as to recruit Jackie Chan to appear in two scenes. One is simply awful: Helen and Kazaf crash Jackie's wedding to a drunken bride, where Chan has nothing better to do than mug over his bride's antics and his loss of the wedding ring. He redeems himself in his second appearance as an ambulance driver transporting Helen and a dying Kazaf (starving for blood, he refuses Helen's offer of hers) while the Duke's minions give chase on motorcycles. This chase and fight scene lets Chan do some of his characteristic stuntwork, and has one genuinely silly moment when Helen and Jackie try to fend off the vampires by squirting blood packs at them the way you might throw scraps of meat at a vicious guard dog. As well, as a non-American comedy, this film isn't afraid to play some moments completely straight and let some major characters die. Those breaks in the goofiness make many of the goofy parts more bearable. There are more misses than hits, as you might expect, but ultimately Wendigo found the film endearing rather than obnoxious, cute like an idiot puppy that remains sort of adorable even as he bumps into walls. The movie grows on you. We were won over, as far as we were going to be, sometime between the moment Helen responded to Kazaf bearing his fangs with, "You're being a jerk!" and the ambulance chase. Effect is really little more than a star vehicle for a pop duo, but Twins really do more than anyone else, in his judgment, to make the film bearable if not entirely entertaining. They have an indisputable charm despite the often incredibly tacky, 80s-ish outfits they wear, and they throw themselves into the absurd Chan-style action with enthusiasm and some skill. Wendigo can't objectively recommend Vampire Effect to true vampire-cinema fans, but he will say that if you happen to stumble across it on FEARNet or elsewhere, you may actually be entertained for a while -- and that's more than he can say for a lot of vampire comedies. He isn't ready to call this one of the best such films, but it's definitely above average.

Here's a Hong Kong trailer for Twins Effect with English subtitles, uploaded to YouTube by 1980Alain.