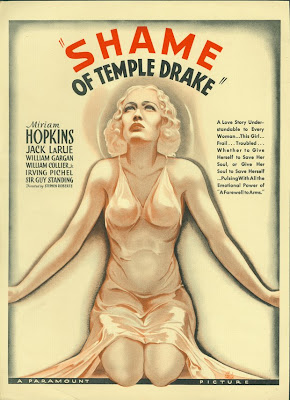 Paramount Pictures's adaptation of William Faulkner's controversial best-seller Sanctuary is an instructive example of the limits of "pre-code" cinema. Modern-day movie buffs tend to romanticize the period between the coming of sound and the institution of stricter Production Code enforcement in 1934 as a short-lived period of maturity and frankness, though not explicitness, that was neutered by religious fanatics, condemning Hollywood couples to separate beds for the next thirty years or so. It's an objective fact that "pre-code" cinema is more lurid and somewhat more ribald than product from the period of Code Enforcement, but there were still limits, and The Story of Temple Drake, which was broadcast on Sept. 14 on TCM to the joy of more than one blogger, illustrates those limits.

Faulkner's novel, allegedly written as hackwork for a quick buck in between more ambitious books, tells the story of Temple Drake, an 18 year old college girl who endures a night and day from hell after she rides along with a casual boyfriend to pick up booze from a backwoods bootlegger. They're stuck in Lee Goodwin's country house of horrors after a car wreck, and Temple, a judge's daughter, feels menaced by all the men there, but especially the sociopathic gangster Popeye. Laugh all you like, but Popeye kills a "feeb" who'd tried to protect Temple and rapes the girl, in the book's most infamous scene, with a corncob. Popeye blows the scene, allowing Goodwin to be arrested for the feeb's death and taking Temple with him to a whorehouse. Goodwin's lawyer, Horace Benbow, tracks Temple to the whorehouse and urges her to testify at Goodwin's trial to save his life. Though she admits the truth to the lawyer at the brothel, Temple refuses to take the stand -- only to appear as a prosecution witness and perjure herself by identifying Goodwin as the murderer and her attacker. Goodwin is convicted, but the local mob can't wait for the execution and lynches him. Temple's father takes her into Parisian exile. Popeye gets arrested, convicted, and killed for an unrelated offense.

Screenwriters Oliver H.P. Garnett and Maurine Dallas Watkins make some of the usual pointless cosmetic changes. Judge Drake becomes Temple's grandfather rather than her father, Horace becomes Steven Benbow (William Gargan) and, perhaps most importantly for the studio that released Max Fleischer's cartoons, Popeye becomes "Trigger" (Jack LaRue). The most obvious cosmetic change is the title, which was going to be -- as the poster above shows -- The Shame of Temple Drake. Why not call it Sanctuary? To fool people who wouldn't let a Sanctuary movie into town? There's probably an answer to that question, but I don't know it. Some story changes are more drastic. The story follows Faulkner pretty closely until the rape -- though no corncob is ever shown. Later, director Stephen Roberts stages a melodramatic confrontation for Benbow, Temple and Trigger. The lawyer threatens to beat up the gangster but Temple, fearing that her old friend will be killed, makes like she loves Trigger and enjoys her new life until she drives Benbow away. Then she prepares to leave, proving to Trigger that she'd just faked her affection to save Benbow's life. He tries to stop her from leaving, but she shoots him to death. She reaches the county seat where Goodwin's (Irving Pichel) trial is held, but is reluctant to testify because of the shame it'll bring on her (she's been a subject of gossip the whole picture) and her family. Benbow calls her to the stand, but can't bring himself to ask the necessary questions of her. As Judge Drake reprimands Benbow for frivolous lawyering, Temple stands up and volunteers the truth, saving Goodwin, before she faints. Benbow carries her out of the courtroom, telling the judge, "Be proud of her. I am."

Rarely seen outside of film festivals in modern times, Temple Drake has a huge reputation among pre-code connoisseurs that is partly justified on its own terms. After an opening that stresses Temple's centrality to town gossip, the film really gets going once she and her escort get stuck in the woods. Their approach to and arrival at the Goodwin place, guided by the drawling. gibbering feeb, is something out of a horror film, and it could be argued that the motley, menacing Goodwin household is a precursor of The Texas Chain Saw Massacre and other rural terrors. Karl Struss's cinematography is proto-noirish at times, often transforming Trigger into a pure silhouette of malice. At age thirty, Miriam Hopkins is too old to play Temple but gets the spoiled, scared essence of the character right, and she looks fine in the pre-code actress uniform: lingerie. Her ordeal is one with which anyone of either sex who ends up stuck with dubious strangers on a vanished friend's initiative can empathize. Jack LaRue plays Trigger like someone's prophetic fever dream of Humphrey Bogart -- maybe Bogart's own -- but he doesn't live up to my reader's recollection of Faulkner's Popeye. On the page, he reminded me of Anton Chigurh. Popeye dominates the novel, starring in the opening and closing chapters, in a way he can't in the movie, which is Temple-centric. From his early menacing encounter with Benbow to his ironically passive submission to death, he flows through the novel like a current of evil, but is just too easily dispatched in the movie, just as evil is too easily dispelled.

But while pre-code cinema is no match for mainline Southern gothic, it has to be admitted that Hollywood would not be able to touch this material for decades afterward. I don't believe there was another Faulkner adaptation until 1949's Intruder in the Dust, and Sanctuary would finally be filmed under its own name in 1960, -- my copy of the novel is a movie tie-in -- with Popeye further transmogrified into Yves Montand (!) and again renamed, presumably out of deference to Roy Rogers's horse, as Candy. And even a bowdlerized, happy-ended version of Sanctuary was way too strong for the Legion of Decency types who already had enough clout to demand cuts to Temple Drake. The fact that a major Hollywood studio would even think of taking on Sanctuary, when it certainly wouldn't just two years later, is what we love about the pre-code era, even when we admit its limitations. Better a truncated Sanctuary in 1933 than none at all, which is what we would have gotten in 1935. There's a poignance to the incompleteness of pre-code cinema, whether on the individual level of variously compromised films or the overall sense of the period as a dead end or a path but partially taken before the road was blocked. Had The Story of Temple Drake appeared last year, it would have been condemned as a travesty on the level of the Demi Moore version of The Scarlet Letter. As a product of 1933, it deserves a lot of the credit it gets from posterity.
Posted by Samuel Wilson at 11:05 PM

Well said, brother Samuel. "Her ordeal is one with which anyone of either sex who ends up stuck with dubious strangers on a vanished friend's initiative can empathize. Jack LaRue plays Trigger like someone's prophetic fever dream of Humphrey Bogart -" Well said - he's a fever dream of Dixon Steele from IN a Lonely Place!

Seeing parts of it again last night all cleaned up and pretty made it seem suddenly a lot less edgy, whereas the grungy messed-up prints of the festivals gave it an extra edge. PS - I did notice a whole mess of corn cobs in the stable stall where Temple is billeted, kind of to the upper right of her pillow or where a pillow would be would she had one. PPS - I have the very same 1960 remake tie-in book, the one (I'm presumuing) with Lee Remick in a nightgown on the cover?

I haven't seen this one and am sorry I missed it the other day on tv. However, you do highlight limitations that the pre-code era has. For me, the reliance on exploitation rather than profundity makes most of the pre-code stuff rather limited in its scope for me. Entertaining? Heck yeah. All-time great films? I'm not so sure.

Erich: You are correct, sir, about that paperback, which also includes Faulkner's novel-in-play-form (or vice versa) sequel, Requiem For a Nun. And I should have clarified that we never see Trigger handle a corncob -- in fact, the visual code for his sexual aggression is his putting out a cigarette -- nor is a bloody one introduced as evidence at Goodwin's trial. The idea of corncob-as-phallus was still too much for pre-code Paramount.

Jon: That's a further topic for discussion, since many critics have come to the defense of the code-enforcement era's often sophisticated sublimation. Others question how profound any film could be, depending on the subject matter, given the Code restraints. I wouldn't call pre-code exploitative as a rule, but the period's hard-boiled attitude can certainly look that way.

Yes true, not as a rule per se, but many pre-code films, especially those loaded with sex, I feel are exploitive of women, but I've had arguments over this in the past and never got anywhere in the end.