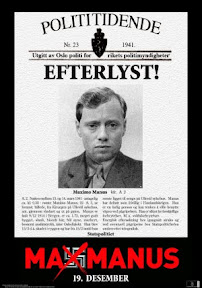 It seems as if the 21st century revival of Jean-Pierre Melville's Resistance thriller Army of Shadows has inspired a small genre of neo-Resistance films, including Denmark's Flame & Citron, France's Army of Crime and, debatably, Quentin Tarantino's Inglourious Basterds. Perhaps it has to do with a now-universal sense of being under siege in the age of terrorism, or with a subconscious itch to emulate Islam's intrepid bomb-makers, or with a feeling of envy toward or inadequacy compared to the heroes of the World War II (aka "greatest") generation. Whatever the impetus, Max Manus is Norway's entry in the field, based on the real-life exploits of the country's greatest resistance hero, as told by him in a two-part memoir. It appears on an American DVD with the tacky subtitle "Man of War," as if Manus were a video game hero -- an impression his name doesn't exactly dispel.

Joachim Ronning and Espen Sandberg have directed a slick thriller with impeccable production values about a man who established his belligerent credentials before the war came to Norway, fighting for the Finns against the Soviet invasion of 1939. In his own country, Manus (Aksel Hennie) becomes known as "the window jumper" for his desperate attempt to escape the Gestapo early on, though he eventually owes his freedom to a friendly, patriotic nurse after he's hospitalized under guard.  He makes his way to Scotland, where the Brits train a special Norwegian unit of guerrilla commandos to carry out acts of sabotage against the Germans. Through skill and luck he earns the reputation of an escape artist among his own people and his Nazi antagonists, and earns recognition as the leader of the resistance -- a status ultimately confirmed when he gets to ride shotgun in the King's car during a victory parade. His campaign climaxes with his attempt to blow up the SS Donau, a cargo ship converted into a deadly anti-aircraft platform. Belying German efficiency, Manus and his team manage to board the ship without papers by telling the crew and guards that they're electricians on a repair job. As it happens, the Donau does have electrical troubles, but it and the harbor also have soldiers with a habit of peppering the water with machine-gun bullets just in case anyone happens along in an inflatable raft who doesn't belong there. Manus's gang will have to run that gauntlet if they want to watch their handiwork go boom....

Max Manus is efficiently made on every level and will satisfy anyone looking for realistic World War II action, but it isn't really anything more than an efficient war film until the final reel, when peace demoralizes Manus more than any wartime setback. He wasn't the only one for whom the war was a liberating experience before his country was liberated, nor the only one whom war made more important than he ever could have been in civilian life. Victory deflates him, and he crashes hard, his depression compounded by a bad case of survivor's guilt illustrated by ghosts toasting him in his flag-draped apartment. He's drawn out of his self-pitying shell by the love of a good woman, but Ronning and Sandberg film his triumphant ride in the victory parade both as an epic payoff to the great adventure and as a reminder that Manus's alienation persists on a level that isn't readily abandoned. As the crowds hail him, he gazes into the rear-view mirror in a manner just slightly reminiscent of Travis Bickle at the end of Taxi Driver.

The closing title cards inform us that Manus struggled with alcoholism and emotional issues for the rest of his life, but still managed to run a business and play the part of national hero with what looks like a natural modesty, based on the documentary footage included on the DVD, for another fifty years. For me at least, those final scenes, well performed by Aksel Hennie, were a bigger payoff than blowing up a warship, and they make Max Manus something more than a simple patriotic saga. For some men of war, victory and peace don't automatically mean happiness ever after. They just mark the start of a different kind of struggle.

Here's a trailer that includes actual English-language dialogue from the picture, uploaded to YouTube from jrroenberg.