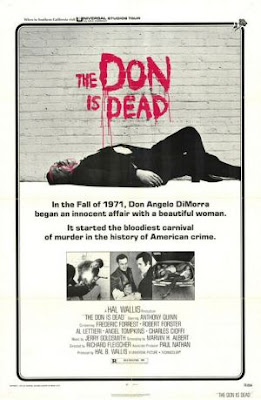 As a young Warner Bros. producer, Hal Wallis helped get the studio's legendary gangster genre going with Mervyn LeRoy's Little Caesar. More than forty years later, Wallis was the one surviving producer of that era to get a post-Godfather crack at the genre, producing this adaptation of a Marvin H. Albert novel for his independent unit at Universal. As a matter of fact, there's something old fashioned about The Don is Dead, a melodramatic element and an emphasis on romance, however brief, that dates the picture just as much as its aping of The Godfather in other respects.

Directed by Richard Fleischer in the midst of his last interesting run of films -- it follows Soylent Green and precedes Mr. Majestyk and Mandingo -- the film traces the repercussions of a don's death. The late Don Regalbuto was one of three Mafia family leaders in his unnamed city, and while his son Frank (Robert Forster) is poised to inherit, members of the national Commission question whether the reckless hothead -- he'd nearly been ambushed making a heroin deal in the opening scene -- is ready for the responsibility. Orlando (Charles Cioffi), the consigliere of a jailed don, proposes dividing the Regalbuto territory between his boss and Don Angelo (Anthony Quinn), while Angelo himself sweetens the deal by naming Frank heir to his own family. During the transition, the Fargo brothers, Vince (Al Lettieri) and Tony (Frederic Forrest) are allowed to become independent operators, albeit on call when the dons need their services. The Fargos are Frank's friends and had saved him from that ambush, but Tony is tiring of the life and wants to get out of the business.

Almost at first sight you can tell that Orlando is a backstabbing schemer -- he talks too smoothly, for one thing -- and he's soon at work driving a wedge between Angelo and Frank. His master plan, if you can believe it, is to provoke a romance between Angelo, a lonely middle-aged man, and Frank's girlfriend Ruby (Angel Tompkins), an aspiring singer-songwriter, while Frank's in Italy making a drug deal. Angelo is implausibly moved by the treacly tune he hears on Ruby's demo tape, and she reciprocates his promise to promote her career by sleeping with him. Had Angelo been as central a character as Quinn's star billing promised, we might have gotten more buildup of his emotional life or prior lack of one, to make his crush on Ruby plausible. But since there's no real main character here, and no one person's perspective dominates, Angelo's romance looks exactly like what it is, a creaky plot device of the sort you might well have seen during Wallis's salad days in the Thirties and Forties.

Of course, when Frank returns he gets an anonymous note telling him that Ruby has moved into a new apartment provided by a new sugar daddy. He tracks her down, trashes her apartment, and beats her to a pulp. An enraged Angelo orders a hit on Frank, then has second thoughts, but too late to prevent a parking-garage ambush that kills Frank's consigliere and makes a gang war a certainty. The Fargos are drawn into it, Tony very reluctantly, and when Frank agrees to a meeting that's an obvious deathtrap without waiting for Tony's advice, he ends up getting Vinnie killed. From this point, Tony emerges as the central character, tracing a Michael Corleone-like character arc from smart, reluctant hood to cold, ruthless crimelord, with the unctuous Orlando standing in his way....

The Don is Dead struck me as a doubly old-fashioned film, despite Seventies style bloodshed and a suspenseful, often sinister modernist score by Jerry Goldsmith. There's something hokey about the whole using-a-woman-to-manipulate-rivals storyline, all the way through to the abrupt, almost arbitrary deduction that exposes Orlando's scheme. At the same time, this film, made in the shadow of The Godfather, reminded me of the obsolescence of the Puzo-style narrative focusing on the highest echelons of organized crime. Fleischer's film is like Coppola's in its formality, emphasizing the often stilted rituals of mafia deliberations as an illustration of the "just business" parallels of crime and corporate culture. In the same year, 1973, Martin Scorsese's Mean Streets would begin to make that style of crime film obsolete. From then on, American cinema's focus would begin shifting toward working-class organized crime and its vulgar excesses. American audiences seemed more interested in seeing criminals claw their way up than in watching them reign as a shadow ruling class. By the standard Scorsese set, Don is lacking in aggression and animal spirit -- even a proverbial Seventies beast like Al Lettieri is toned down while playing a relative good guy. Nor, of course, does Don stand comparison with the Godfather films. Fleischer puts together a few suspenseful moments, but some parts are shockingly inept, like Lettieri's death scene that obliges the actor to stumble into and topple over not two but three stacks of crates. The film has a terrific cast of character actors who do well here, with the conspicuous exception of a pretty bad Robert Forster as Frank, but Don never accumulates the power it should have. Given its historic pedigree and the opportunity Hal Wallis had to realize a synthesis of the Warners tradition and the Seventies sensibility, that's a damn shame.
Posted by Samuel Wilson at 11:55 PM

Interesting. Never heard of the film. I've heard of Richard Fleischer (having watched Mr. Majestyk), but I think I might check this one out. Thanks.