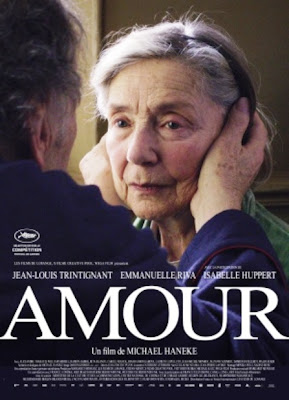 It isn't exactly accurate to describe Michael Haneke's film as an unflinching look at aging and death. By my standard, Haneke does flinch near the end, opting for a sudden catharsis or climax rather than taking the ride to its proper end. The climax really makes Amour about something besides aging and death, but you'll have noticed that the film is titled neither Aging nor Death. That title may be a deliberate echo of the movie film buffs remembered octogenarian Best Actress nominee Emmanuelle Riva for before this one: Alain Resnais' Hiroshima Mon Amour. But while the Academy, always impressed by affliction, has recognized Riva, and quite rightly, the title really refers to the plight of her co-star and fellow Nouvelle Vague veteran Jean-Louis Trintignant. He plays the husband of Riva's stricken pianist, and his character faces the universal dilemma of what to do for, or about, a loved one who feels her life is over, no longer worth living, and who may be objectively correct. What you may have heard about Amour is that Haneke is unflinching in his depiction, and Riva in her portrayal, of the woman's physical, emotional and mental deterioration. That may have been confirmed subjectively by an overheard audience member who lamented that the film might make people want to slit their throats. It's tough material, sure, but some of us are made of tougher stuff than that. I was toughened by some personal experience of death and by reading Phillip Roth's last run of death-haunted novels. If you can stand Everyman ("Old age isn't a battle; it's a massacre.") you can deal with Amour, though the added visual element may make the movie more challenging. In fact, I'm tempted to say they should give Riva the Oscar for sheer fearlessness in doing a nude scene -- she's being washed by a nurse in a shower -- at age 85. What might make Amour even harder to take is that, while Roth told his late stories from the vantage of his faltering yet still basically sentient protagonists, Haneke compels you to empathize with someone watching a loved one irreversibly deteriorate. We're dealing with two kinds of helplessness, one of which can't be helped while the other always second guesses itself. The Trintignant character strives to normalize his and Riva's predicament, and the effort rings true. In part it's a vain hope that the situation will stabilize, that you'll reach a new normal and stay there, and in part the day-to-day adaptation is the new normal. You see that when Haneke contrasts Trintignant's exhausted calm with the horrified panic of Isabelle Huppert, playing the couple's daughter who only drops in occasionally and thus only sees a crisis. For those on the ground, a long dying does establish a normality that Haneke depicts with enough accuracy for Amour to live up to its advance notices. He does this so well that it seemed disappointingly predictable that he opted for shock. Even then, the climactic act raises fair questions in keeping with the overall theme and the title. Is it an act of love or a lapse from love? You'll have to see it to decide, but once you see it you should be able to appreciate either side of the question.

Amour is a sharply made movie that respects audiences' intelligence or assumes their understanding. Haneke steers clears of the sentimental cliches and many of the predictable signposts of most movies about dying, mainly because he isn't interested in acceptance or transcendence. He didn't make a tearjerker, though he recognizes that some may feel otherwise. He has Trintignant tell a story about seeing a sad movie as a child; as an old man, he doesn't remember what the movie was about, but he remembers being so moved by recounting the story to someone else that he cried during the telling. In another scene, Trintignant has a vision of a restored Riva playing her beloved piano. Haneke cuts from this vision to Trintignant appearing to see it. Your average director would next cut back to the piano and its empty bench, so all can understand that Trintignant was hallucinating or daydreaming. Haneke can do without this. We see a CD player working behind Trintignant, and we see him shut it off, and it's clear from that he was only hearing the music and imagining Riva healthy again. Another way he avoids sentiment is the absurd, Herzog-like denouement in which Trintignant chases a pigeon around the apartment, repeatedly trying to catch it by throwing a blanket on it. At almost the last moment you'll think that Haneke has finally succumbed, giving Trintignant one more vision of a revitalized Riva and making it look like the wife guiding the husband out of life. Very sad and very sweet, except for one thing -- and while I won't spoil the climax I'll spoil this: we never find out exactly what happens to the husband. You might assume that he's also died, but this is never confirmed. For all you know, he may have been taken away to just the sort of home that he'd promised to keep Riva away from. For all you know, that vision promises not transcendence but madness. Either way, it probably does illustrate love in a tragic way. My only problem with Amour is that its climax seems gratuitous rather than dramatically necessary. The picture doesn't need that extra bit of drama, but if Haneke's resort to it disappointed me it didn't really compromise the powerful overall effect of one of 2012's best films. It's a work of art worthy of its dread and ultimately humane subject.
Posted by Samuel Wilson at 11:00 PM

"Haneke steers clears of the sentimental cliches and many of the predictable signposts of most movies about dying, mainly because he isn't interested in acceptance or transcendence. He didn't make a tearjerker, though he recognizes that some may feel otherwise.."

Well Samuel, considering that you are not a person who is easy to please, and that's an understatement, your final summary judgement really vaults this to the top of the 2012 crop. Oddly enough, though I do respect this film quite a bit and acknowledge it's supreme artistry, it just missed my Top 10 list by a hair. I am not sure why, since I can't find any significant fault, and am an admirer of Haneke's canon. it's just that I wonder if I could look again at this exceedingly downbeat often jolting film, that does again bring one directly up front with Haneke's dire world view. One critic suggested that the director is saying that it's better to be dead than alive. I don't buy that proposition, but I understand where he is coming from. It's a clinical, austere film that does bring Bresson to mind, and a Hungarian film named LOVE from 1973 by Karoly Makk, that stars Lili Darvas. Riva is extraordinary, as is the less-honored Trintignant and the film's universality is striking. I am rooting for Riva to win the Oscar, and even hope Haneke wins Original Screenplay.

"My only problem with Amour is that its climax seems gratuitous rather than dramatically necessary."

I enjoyed reading your insightful review, Samuel. To me it's a work of art. I don't, however, feel that the climax is gratuitous. It simply seems like the logical conclusion of the "amour" Haneke has been talking about up to that point.

With regard to Sam's comment about Haneke's "dire world view," I don't see such a thing in this film. I see Anne flipping through the pages of the scrapbook and hear her say to Georges, "It's beautiful, isn't it?" That life must end, in one way or another, is merely a fact of life, so to speak.

SPOILER: Although I don't take much stock in speculating over what happens to film characters after the last shot, it seems clear to me that Georges is starving himself intentionally.

Like you I'm rooting for an Oscar win for Riva As you may know, she turns 86 the same day as the Oscars, and that would be a fitting gift.

Thanks, again for the insightful coverage.

Sam, it seems like the critic you cite just can't take it. I got no sense that Haneke prefers death, but he clearly feels that suffering can't be avoided by people and shouldn't be avoided as a topic for art.

Unknown, the logic of Georges' character arc remains debatable, but the climactic act seems designed as much to shock as to fulfill that logic. As for your spoiler, I agree as far as what Georges intends to do, but it was odd for Haneke to end the old man's story with a hallucination out of old-time melodrama rather than what Sam might call a more clinical moment.

I should clarify that while I wrote that Riva definitely deserved a nomination, I'm not sure she's my favorite in the Oscar field. Right now it's a toss-up between her and Jessica Chastain, and I won't kick if either one wins.