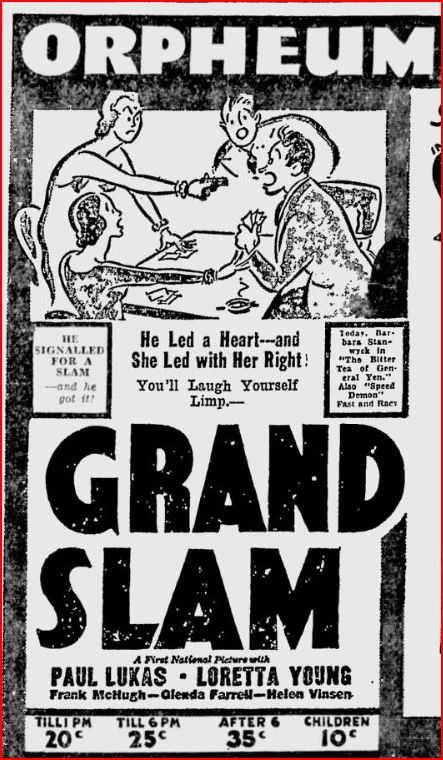 You need a foursome for bridge, so let's start there. Speed (Frank McHugh) is dating Blondie (Glenda Farrell) but really pines for Marcia (Loretta Young), who only has eyes for Peter Stanislavsky (Paul Lukas), the intellectual waiter at the restaurant where she works as a hat check girl. Examine Blondie and you understand Speed's infidelity. A few years later Glenda Farrell would make a picture called Smart Blonde; here she occupies the other end of the blonde spectrum. It's really an amazing performance by the actress typed by history as a cunning schemer, be she gold-digger or ace reporter. "I like food!" is a typical utterance. More typical is "I forgot ..."  She'd forget her head if it wasn't attached, and you can see why Speed wants to forget her. The film itself will forget her, despite her fairly high billing. But Marcia loves Peter, despite his failings as a waiter. She loves an intellectual, and Peter's trying to write a book. Speed writes 'em all the time but never takes credit; he's a full-time ghostwriter. He suggests bridge as a book subject to Peter, having written one such book himself. Stanislavsky despises the game, even though Marcia makes him play to be sociable. The 1930s appear to have been the golden age of bridge, even if William Dieterle's comedy exaggerates the game's popularity slightly. Peter becomes conversant enough with the game to be called in to finish a foursome at a party he's helping to cater and becomes an inadvertent sensation when his unorthodox tactics -- he's one of the few players who doesn't rely on a guidebook like the one Speed ghosted -- result in his victory over Cedric Van Dorn (Ferdinand Gottschalk), who turns out to be one of the nation's top bridge experts. He wrote one of those popular guidebooks; in fact, it's the one Speed wrote, and once the news of the waiter's unlikely coup hits the papers, Speed offers to do the same service for Peter. Since Peter has no actual system, it's up to Speed to make up a Stanislavsky method, if you will, from whole cloth. It's up to Peter (and Marcia) to publicize it. They quickly become celebrities, starring in their own radio program, Marcia as the pupil, Peter as the master. Success goes to Peter's head, however. It exacerbates a certain arrogant streak in him that alienates Marcia and infuriates Speed. After Marcia leaves Peter, Speed goes in for the kill by outing himself as the actual author of Peter's book. The revelation, following the breakup of the popular team, threatens to ruin Stanislavsky, who sees one chance for redemption. He challenges Van Dorn to a match, with play-by-play on a nationwide radio hookup. The old master jumps at the chance for public revenge.

Up to this point, Grand Slam has been a charming comedy poking fun at fads and publicity, and an unexpected showcase for Paul Lukas's skills as a comedian alongside such practiced comics as McHugh and Farrell. For the climactic showdown between Stanislavsky and Van Dorn, Dieterle amplifies the absurdity until the picture is practically a cartoon. It starts with the radio commentary before the bridge match begins, the announcer promising to introduce celebrities as if they were ringside at a championship fight. A cross-section of the nation is listening in, from blacks at a billiard hall to Chinese at a laundry, from convicts in prison to kiddies at the orphanage. Finally the moment comes and the master of ceremonies cries out: "Play! Play!! Play!!!" And the world stops. It almost literally stops in a montage of freeze frames, a diver in mid-dive, horses in mid-race, etc. That's how popular bridge is. But the big event proves poor entertainment. After the first round Van Dorn has a near-record lead over the hopelessly exposed Stanislavsky. His only hope for a comeback is with one of his old restaurant cronies as a partner, to cheat with. But Van Dorn quickly detects that ploy and things really start looking hopeless for our hero -- or they sound hopeless for the radio audience, including a troubled Marcia and a drunken -- this was inevitable for McHugh -- Speed. With no one willing to partner Peter it looks like the end ... but who's that coming out of the audience? Who can make the world restart by inspiring Peter to make the same opening bid that beat Van Dorn so long ago, as fans of all ages and races rejoice? I needn't answer. All I need to say is that Grand Slam is an utterly likable comedy that taps into a vein of benign silliness running through the Pre-Code era without indulging in any alienating "nut" humor. It's not as purely funny as the great subversive comedies of the time, but modern audiences may find it more accessible, the characters being more humane, once they accept the premise of bridge's outlandish popularity. A 21st century remake would have to be about poker, and would probably have to be twice as long and half as funny. Done in 65 minutes, Dieterle and company don't give themselves time to wear out their welcome. An hour with Grand Slam is an hour well spent.

Now you can spend approximately 2% of that time with the original trailer from TCM.com