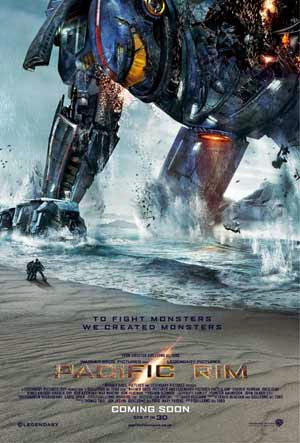 It would have been hard to believe in 2008 that Guillermo del Toro would not make another movie for five years. The field seemed wide open for the Mexican horror specialist after the pop success of his second Hellboy movie quickly followed the arthouse triumph of Pan's Labyrinth. Many projects were announced afterward, but only now has he released his next film. Most notoriously, he had to bail out of The Hobbit after Warner Bros. kept him and Peter Jackson dangling for an unconscionable period. His own dream project, an adaptation of H. P. Lovecraft's At the Mountains of Madness, is a long-term tenant in development hell, Hollywood balking repeatedly at the story's lack of action, female characters, etc. Thwarted, del Toro turned to a project he'd been thinking about since at least 2010: a homage to Japanese monster movies (kaiju eiga) pitting massive mecha against beasts from the bottom of the sea. The actual idea was Travis Beacham's; he and del Toro co-wrote the screenplay, which proves as much an homage to military aviation movies as it does an amped-up monster movie. Just about every cliche you can imagine from such pictures shows up in Pacific Rim, making the plot pretty predictable and underscoring the superficiality of all the characters. Right there some del Toro fans will be disappointed, but the director's main concern this time is with spectacle as an end unto itself. If he can deliver that and instill a sense of wonder like that his own generation felt watching the original Godzilla films, Pacific Rim will be a success in spite of its shallow human element.

By one standard, the film fails miserably as an homage to kaiju eiga because Beacham and del Toro's kaijus are just about completely lacking the personality the old men in suits sometimes managed to give their characters. If Roland Emmerich's Godzilla erred by rethinking the monster as some sort of animal, Pacific Rim errs by making its monsters into aliens. The kaiju -- so the world dubs them -- burst from an apparent dimensional rift at the bottom of the Pacific to attack cities on either side of the ocean. Existing military technology (the first attack takes place this very year) can take down the kaiju, but it takes a long time during which the monsters can do unacceptable damage. Working on a familiar level of childish intuition, the world's military and scientific experts determine that giant humanoid robots that can punch, throw and, yes, shoot the kaiju will make more effective defenders of humanity. In a long prologue, the experts are proven right to the point where kaiju become objects of pop-culture mockery -- but like bacteria, our enemies are adaptive, learning new ways to defend themselves and overwhelm the jaegers -- though no Germans are shown piloting the robots, they are dubbed auf deutsch, begging the question why this film isn't called Jaegermeister. Instead, the countries with skin in the game -- the U.S., Canada, Australia, Russia, China and Japan -- what about Mexico, Guillermo? -- take the lead in robot combat. The complicated robots require double brainpower to operate, with pilot teams bound by family ties preferred. The Americans, for instant, use two brothers to pilot "Gipsy Danger," but you know that can't last.

Needless to say, the surviving brother (Charlie Hunnam) goes into a five-year funk, while the jaeger program is dropped in favor of erecting impregnable sea walls to protect Pacific Coast cities. Needless as well to say, one of those walls gets pregged, and soon our hero's old commander (Idris Elba) picks him off a wall-building project to man one of the last jaegers for a last-ditch defense against newer, better kaiju. By now, scientists -- or at least the two eccentrics working with the jaeger program -- have figured out that the kaiju are coming through a portal that can be closed by dropping a big enough bomb down its "throat." By the way, aren't you getting tired of superhero or sci-fi movies in which everything hinges on closing or opening a dimensional portal? If not, Pacific Rim is the movie for you. But before any throats get bombed, our hero has to bond (or "drift") with the obligatory Japanese character (Rinko Kikuchi) -- and I'm not being sarcastic; a Japanese character is obligatory in a kaiju eiga homage -- who has relatives of her own to avenge, as well (it emerges) as surrogate-daddy issues with our overprotective stalwart commander. Our mismatched team must prove themselves to skeptical peers, including an almost equally obligatory arrogant jerk, defying the rules (as American heroes must) if necessary, while on top of everything else, our stalwart commander has the Movie Disease, though in a twist on the formula the blood comes out of his nose. Do you think he'll die of it???

I probably could have spared you all that since I've already said that the spectacle makes or breaks the film. The results are mixed. I have a feeling I made the right choice not watching Pacific Rim in 3D, since, like so many films presented that way, del Toro's is inexcusably murky. On top of that, he sometimes films the kaiju-jaeger fights so close that clarity is lost, especially considering that they almost always fight in the rain and in the ocean. One of the reasons the kaiju lack personality, despite each one getting a code name you may be expected to remember at the toy store, is that you never really see them clearly. Del Toro is too ambitious a director to film the battles as straight-on as they did at Toho back in the day, but when you never see the kaiju straight on they end up as so many roaring blobs, a few of which at least have semi-distinctive heads. It's probably no accident that the best action scene is on land, when Gipsy Danger must battle a kaiju in the streets of Hong Kong. When del Toro deigns to give you a clear shot of a jaeger throwing a picture-perfect punch or using a freighter like a club, Pacific Rim delivers as promised. Overall, his pictorial sensibility is too strong for the picture ever to fall too long into incoherence. It often looks pop-perfect, for which the production designers and cinematographer Guillermo Novarro deserve shares of credit. Inevitably, no matter how much del Toro professes his love for monster movies, this film will look thematically impersonal compared even to the Hellboy films, but a few moments when his horror-film sensibility shows itself are among the film's best. Both scenes tap into the nightmarish fantasy of being personally persecuted by giant monsters. In a flashback, a weeping child toddles through a devastated city, perhaps a lone survivor, one shoe on and one off, as a kaiju approaches. In comic mode, a newborn monster literally targets a specific person, a comedy-relief scientist who inadvertently taps into the kaiju hive-mind. As far as acting goes, the comic scientists (Charlie Day is American; Burn Gorman a Colin Clive-ish Brit) are tolerably obnoxious, welcome for at least having personalities, while del Toro mascot Ron Perlman puts in his expected yeoman work as a dealer in black-market kaiju parts. As our drifting heroes, Hunnam and Kikuchi are no less than earnestly likable, while Idris Elba is painfully overqualified for his cliched commander role and needs to get out of the genre ghetto fast -- but Thor 2 is next, I'm afraid. Ideally, Pacific Rim's spectacle should redeem its unimaginative characterizations, but it doesn't do so by as decisive a margin as I'd hoped for. It's an entertaining film and those who like what del Toro likes will like it, but it wasn't unreasonable to expect something more than mere entertainment from any del Toro film, and a sense of disappointment may linger once the entertainment is forgotten.
Posted by Samuel Wilson at 10:04 PM

Yep, Samuel, I would not expect much more than what you settled on. I actually avoided this on Saturday afternoon, watching the Indian LOOTERA, while my wife and the three boys took in PACIFIC RIM. They liked it, though they weren't celebrating. Yeah I'd think the monsters as aliens is timeworn, though you note the fun quotient is there in reasonable supply. Ah well I'll see it at some point. Great review!