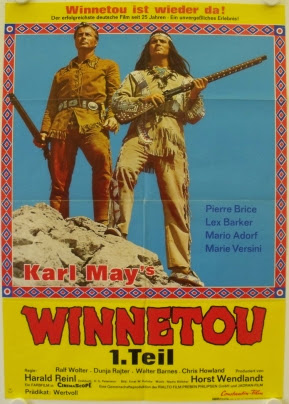 Why did Italy beat West Germany in the great Euro-western race of the 1960s? In this competition to make up for the decline in American product due to the glut of TV westerns in the United States, Germany's Sputnik, so to speak, was Harald Reinl's series of westerns starring Lex Barker. Reinl's first film in the series, The Treasure of Silver Lake, came out in 1962, nearly a year ahead of Gunfight at Red Sands, the film often cited as the first spaghetti western. Winnetou Part One came out in December 1963, well ahead of Sergio Leone's A Fistful of Dollars. Winnetou and Fistful have a lot in common. Both featured American stars, Winnetou's Barker being a veteran of movies going back to his late-Forties Tarzan pictures, while Clint Eastwood was still toiling in television. Both pictures feature dynamic widescreen photography and pop-inflected soundtracks that were new for the genre. Having just watched it, I can testify that Winnetou the Warrior is, at a minimal estimate, a visual treat and an entertaining action film. It's still easy to explain Italy's victory as a matter of quality (and quantity), but that's never been the most reliable explanation of popularity. What did Leone have that Reinl didn't -- or vice versa?

Both Italy and Germany have western traditions dating back to at least early in the twentieth century. The American West provided the setting for a Puccini opera and a series of books by Karl May, Germany's answer to H. Rider Haggard and a favorite author of young Adolf Hitler. May's western hero was Old Shatterhand, a German-American surveyor who becomes blood brother to the Apache warrior Winnetou. While Winnetou Part One wasn't Reinl and Barker's first Shatterhand movie, it is the character's origin story. It reintroduces the character as a greenhorn working for the Great Western Railroad, accompanied by some Euro-sidekicks who give the film an alien element absent in most spaghetti westerns. Like the Virginian, our hero doesn't seem to have a real name. He's called "the surveyor" or "the greenhorn" until he earns his western name in a barroom brawl. It's either a hand that shatters or gets shattered on opposing jawbones. He's brawling because he has a beef with some fellow railroad employees. You see, O.S. had scrupulously plotted a path for the railroad that would avoid Apache land, but the boss on the ground, Mr. Santer (Mario Adorf), has ignored our hero's plans and is determined the have the road plow right through Indian territory. Santer has an ulterior motive; the railroad construction gives him an excuse to search for a legendary treasure.

In Winnetou, Santer (Mario Adof) meets someone he can't push around.

Santer inevitably runs afoul of the Apaches, and Shatterhand gets caught in the middle. He tries to prove his own good intentions to Winnetou (Pierre Brice), who knows English thanks to the presence among his people of a white schoolteacher. Santer ruins things by muscling in on the parley, picking a fight with Winnetou and siccing the Kiowas -- this story's bad Indians, on the good Apaches. The conference ends with the old teacher dead and Winnetou a captive of the Kiowas. To prove his good intentions again, the recent greenhorn Shatterhand manages to sneak into the Kiowa camp, subdue several sentries, and free the Apache. Then he heads back to Great Western headquarters in Roswell NM (!) to settle accounts with Santer. A miniature civil war rages there, highlighted by a feat of guerilla railroad construction that enables Shatterhand to drive a locomotive through Santer's saloon headquarters. Shortly afterward the Apaches arrive to attack everybody, while Santer escapes in the confusion.

The Battle of Roswell

Now Shatterhand is the captive, his throat nearly cut by an enraged Winnetou. The warrior's sister Nscho-tschi (pronounced "Sho-chi," Marie Versini), also taught English, nurses O.S. back to health so the tribe can get the full value from torturing him and his cronies to death as payback for the crimes of Santer and the Kiowas. Shatterhand pleads innocent and is allowed to argue his case in a trial by combat on the river in a leaky canoe. By the time he wins, Nscho-tschi has also produced evidence confirming his rescue of Winnetou. The chastened warrior now agrees to become Shatterhand's blood brother. He also agrees to show the way to the legendary treasure, though no Apache can lay eyes on it, so that Shatterhand can use it to pay for Nscho-tschi's further education in white ways. Little do they know that Santer and his surviving men have been stalking them all along, waiting to discover the site of the treasure before a final attack....

I saw a version of Winnetou 1. Teil on YouTube that's dubbed in English but leaves in comedy bits that were left out of the U.S. release and thus remain in their original German. These scenes involving Shatterhand's buddies and an irrelevant English photographer -- "Was haben sie gegen der Oxford Press?" he asks Indians who ride past refusing to pose for him -- certainly diminish the film compared to the best spaghettis, but would not have been an issue, having been cut, for its first American audiences. They were left with a straight action-adventure story with spectacular locations in West Germany and Yugoslavia that are admittedly less arid than Apache territory ought to be but can be excused for looking so good in Ernst W. Kalinke's camera. Reinl has a good eye for staging widescreen action, whether on wild locations or in his artificial Roswell. Lex Barker is a convincing hero, especially during the river fight, while Pierre Brice became a superstar as Winnetou -- he basks in that glory to the present day -- and Mario Adorf needed only to show up to make a terrrific villain. On the soundtrack, Martin Boettcher is no Ennio Morricone but seems to come from roughly the same place, helping break the monotony of folkloric theme songs that was one of the few flaws of Fifties westerns in the U.S. So again: why didn't Winnetou (or Apache Gold) go over the same way as the Italian westerns?

It comes down to content, I think -- both subject and mood. Winnetou is earnest in an old-fashioned way, while Fistful of Dollars (borrowing from Kurosawa's Yojimbo) introduces a then-modern note of cynicism in its antiheroic violence. Meanwhile, Winnetou spotlights what is conspicuously absent in spaghetti westerns as a subgenere: Native Americans. It had the misfortune to reach America (not to mention other parts of the world) at a time between the exhaustion of a recent wave of pro-Indian Hollywood westerns -- John Ford's apology to the Indians, Cheyenne Autumn, bombed in 1964 -- and a more countercultural championing of the Native cause in the revisionist westerns of the early 1970s. The bounty hunter was the more popular figure at the moment when westerns became global pop art -- a period when "sick" humor and black comedy were in vogue -- while the somewhat paternalistic sincerity of the German Shatterhand films must have seemed corny to those who neither knew nor loved Karl May. Winnetou -- or Part One, at least -- deserved better then and now. It certainly isn't a better film that Fistful of Dollars and Reinl couldn't compete with Leone, Corbucci and others as visionaries of violence. But Winnetou 1. Teil suggests that Reinl may merit recognition as one of the better action-film directors of the 1960s.
Posted by Samuel Wilson at 11:49 PM

Hey, what are you talking about ! ?, "The decline of the American product" ! ? ! ?, American Westerns have ALWAYS been better than Westerns produced ANYWHERE else ! ! !, make no mistake about that.

jimmie, I mean that the best American westerns were made from roughly 1948 through 1962, that fewer and mostly inferior ones were made afterward, and that for at least part of the Sixties the Italians made better westerns as a whole, though The Wild Bunch is still arguably better than any of them.

True, The Wild Bunch is a masterwork.

I have this one, Sam, but haven't watched it yet. I think all of them were released on DVD in box sets, but I don't recall if they have English dubs. One of the series, RAMPAGE AT APACHE WELLS used to come on TV regularly on the Westerns Channel.