Cecil B. De Mille's The King of Kings -- the silent movie not to be confused with Nicholas Ray's 1961 do-over, still currently playing first-run engagements all over the country -- is one of those films of which it is always said that it played in theaters for decades after its original release. Hard to believe for a silent picture, though the De Mille did come out with an early Phonofilm soundtrack. But here's proof from Youngstown, OH. 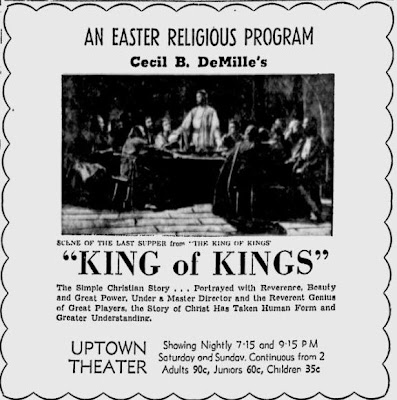 Not a bad idea for Good Friday programming, not to mention counterprogramming, given that the Ray probably already had its "I was a teenage Jesus" reputation, no matter how unfair that way to Jeffrey Hunter. Can't help wondering what this print looked and sounded like. It probably didn't have its original Technicolor bits and all bets were probably off on the sound. Still, as one of those proverbial prints that reappeared through the decades before the age of restoration, the version Youngstown saw is probably a historical document in its own right.
But "the simple Christian Story" wasn't everyone's idea of an Easter weekend attraction.  Also in Youngstown, here's another story with multiple versions. 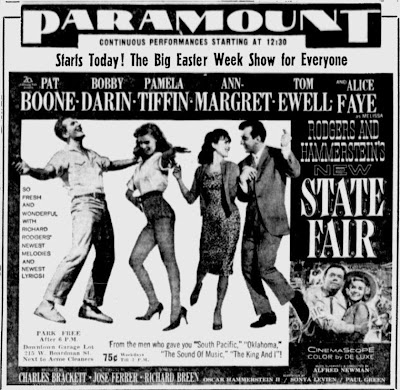 I don't know about you, but Jose Ferrer is absolutely the first name I'd consider for directing a Rodgers & Hammerstein musical. After all, he made Return to Peyton Place!
With all this family wholesomeness we need some real counterprogramming, and we'll find some of it in Pittsburgh, courtesy of our valiant British allies. Thanks for the clip from Only Two Can Play, Lex10.