How popular was the "Rat Pack" as a group in their heyday? Did people buy into the concept of Sinatra, Dino, Sammy, etc., as a cool clique worth watching. This homemade ad from Charleston gives us a clue. 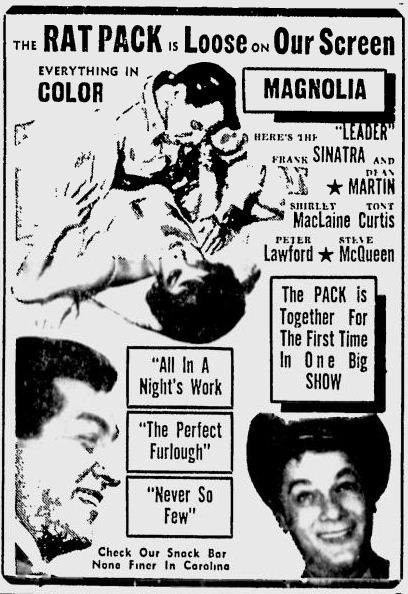 I don't think any of the films in the triple-bill count as a "Rat Pack" movie. Including Tony Curtis in the group seems to be a stretch and the only justification for including Perfect Furlough in the program. Curtis was at most an "honorary member" of the clique, though the nuances may have been lost on the general audience. The real point worth noting here, however, was that with Sergeants 3 playing across the country, one enterprising Charleston exhibitor thought there was such demand for the Rat Pack that he could package three virtually random pictures and call it a Rat Pack event. It's also worth  noting that this South Carolina exhibitor considered his a complete, "together for the first time" Rat Pack despite Sammy Davis Jr.'s absence from all three pictures.  I guess that's why we needed Dr. King in those days. 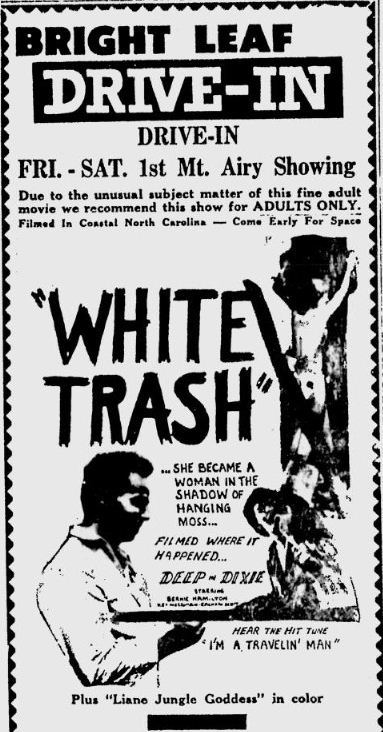 Faithful readers will recall that "White Trash" is Luis Bunuel's English-language film The Young One, aka Island of Shame. Presumably the hit tune mentioned in the ad is the same song sung by Ricky Nelson, but those who've seen the movie will have to tell us whether the movie uses Nelson's version of the song. As for Liane, Jungle Goddess, I'm thinking that was offered as a sort of square-up in case Bunuel's artiness disappointed audiences.
A less controversial race film opens in Azalea NC. 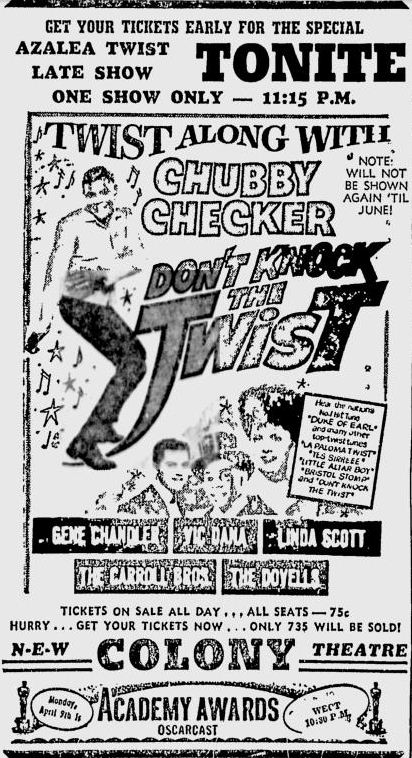 Yes, the Twist craze is still going strong -- or at least the movies say so. This is Chubby Checker's second Twist movie, and a thematic sequel to the first one, Twist Around the Clock. Here's Checker in defensive mode in a film clip uploaded by rvtwist.

Further south, here's a "World Premier" in St. Petersburg, FL, featuring the mighty Cameron Mitchell in the genre he owned -- the Viking movie.

Of course, if you want Mitchell in a proper Viking film you need to catch one of the two he made for Mario Bava -- Erik the Conqueror and especialy Knives of the Avenger. As for why such films exist, I can only assume that Richard Fleischer's The Vikings went over big in Europe and created a demand that Hollywood wouldn't think of meeting until Jack Cardiff's The Long Ships appeared in 1964. L'Ultimo dei Vikhingi was directed by Giacomo Gentilomo, best known if at all as the helmsman for Hercules and the Moon Men and the credited director of Goliath and the Vampires. Mitchell's co-star is Edmund Purdom, like him an actor who got a Hollywood push in the mid-1950s. While Mitchell could at least claim some successes, Purdom was a notorious flop in high-profile pictures like The Egyptian (he took the part Marlon Brando refused) and The Prodigal. He fled to Europe and was an "international" star for some time, never sinking to the depths of exploitation that Mitchell would reach. This film can be seen in pictorially truncated form as part of Mill Creek Entertainment's Warriors box set of peplum movies and similar Italian films.

The second feature took five years to get from Italy to St. Pete. It features another Hollywood reject (at the time of filming), Ricardo Montalban and appears to have had no less than five directors. That's probably not a good sign, and the fact that the original Italian title translates to "Lovers of the Desert" suggests that "Desert Warrior" might have created a false impression of the content.

Five Bold Women was a more recent product. It's an indy western shot in Texas and the only film directed by veteran Mexican assistant director Jorge Lopez Portillo. It's also a rare starring role for longtime character actor Jeff Morrow and a rare post-Sheena appearance by Irish McCalla. Female empowerment seems to be the order of the day as Morrow has to transport five female killers through all kinds of peril. The original tagline was, "They Used a Weapon No Badman Could -- Sex!" How's that for an eclectic triple-bill? You just won't find its like fifty years later.