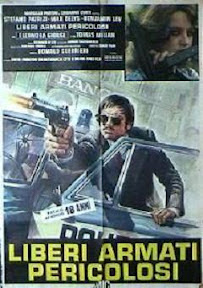 Romolo Guerrieri's film from a screenplay by Fernando di Leo is a juvenile-delinquent action picture with a mystery at its heart. They mystery is why? Why do three relatively well-off young men go on a nihilistic robbery and thrill-kill spree in Milan? What gives the film an extra edge is the suggestion that their motives are unfathomable. The girlfriend of one of the kids, an informant turned diffident hostage, rages at a police investigator (Tomas Milian) who wants to know the answer. He'd rather kill them than find out, she protests, because neither he nor society as a whole really wants to know the truth. The cop wants to blame the boys' neglectful parents, but they blow off his chiding. "You're living in another world," they tell him -- but the truth seems to be that the three kids are. Luis, Blondie and Joe denounce themselves without an authority to hear them with their constant invocations -- most of these come from Joe, the craziest of the three -- of commercial slogans and movie titles. Di Leo name-checks at least two of his own past works, his screenplay for A Fistful of Dollars and his directorial effort La Mala Ordina (aka Manhunt or The Italian Connection) -- and it should be noted in this context that "Joe" and "Blondie" are two names for the "Man With No Name." 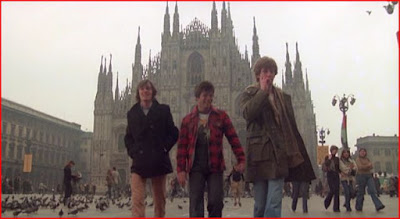 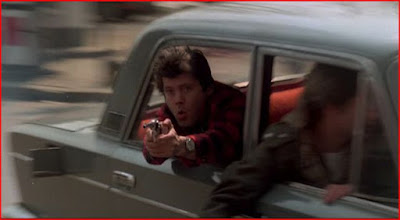 Products of a cacophanous pop culture, why shouldn't their motives be incoherent? Why else rob a bank and toss a lot of lira out your car windows as you drive through a public marketplace? Why else hook up with another gang to rob a grocery store, only to turn on your new partners and mow them down inside? "Why not?" suggests itself, and that may have to do, because the boys probably don't understand themselves. The girl, Lea (Eleonora Georgi) finally guesses that some subliminal gay feeling between her boyfriend Luis, aka Luigi (Max Delys) and ringleader Mario, aka Blondie (Stefano Patrizi) has something to do with it. But worse than that in her opinion, the boys are already dead inside, and Blondie is "worse than dead." Blondie himself has a hard time figuring out Luigi, the least violent of the three. "You come to destroy the world but you won't run a red light!" he tells his friend. Why does Luigi run with the other two, the more obvious and hopeless mad dogs? Why does Eleonora follow along so passively, as much as she's repelled by the escalating violence, until Luigi finally has to deny her entry into their car before their last ride? It's too easy for juvenile-delinquent films to answer these questions and promise resolution. But unless you take the gay angle more seriously than the filmmakers themselves probably do, you're left with no satisfaction of enlightenment once this film is done. 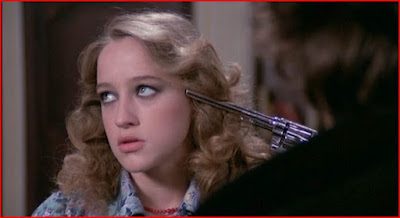 Oh great, a gun to my head! 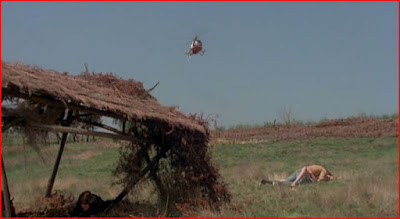 No one would mistake two kids screwing in a field for wanted criminals. 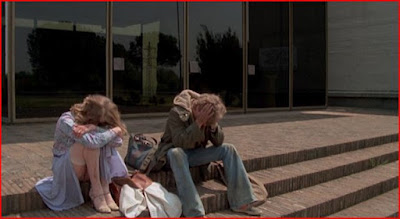 By this point in the picture there are fewer opportunities for jokey captions.

But that's okay if you wanted to see a hard-hitting Italian crime movie, because Guerrieri delivers the bloody goods with picturesque panache. Milan is a great place to stage car chases -- with Carlo Lizzani's Bandits in Milan offering the best example -- and Guerrieri makes the most of his locations. He stages decent gunplay on foot as well. Cinematographer Erico Menczer does screencappers like me a favor by keeping characters in focus in the midst of rapid, rushing action -- it certainly helps that the transfer on the Raro Video DVD is crisp and vivid. 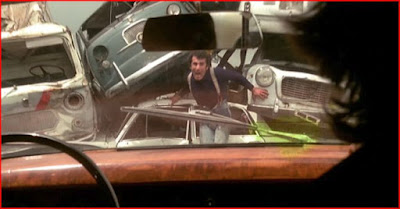 Above, an auto graveyard becomes a human graveyard.
Below, Italian police dogs are not playing! 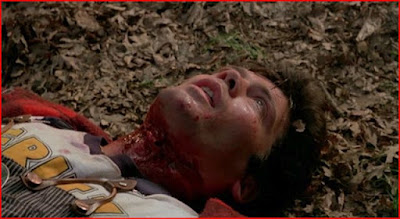 The four young actors in the lead roles capture the desperate inscrutability of their situation that I presume the writer and director intended. Benjamin Lev as Joe goes over the top a bit, but it's not as if we've never seen creeps like him maniacally calling out catchphrases and laughing like jackasses at death. Georgi, Delys and Patrizi need no excuses for their work. Despite the prominence of crime-cinema stalwart Milian on the Raro box cover, Liberi, Armati, Pericolosi (literally, "Free, Armed and Dangerous") is no standard tough-cop movie, as some viewers may discover to their chagrin. It's the sort of film that ends with the cops shrugging in frustration at the futility of their work. 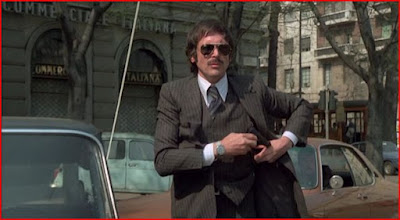 Milian's detective won't learn the answers to the questions he's asking, and neither will the perpetrators learn the truth about themselves, much less face up to it. Whether we can figure it out for ourselves is open to question. We'll get our kicks from the violence or we'll despair for the rootless, hopeless kids, since this film is smartly designed from a commercial standpoint to please different audiences. It won't please everyone and it's definitely open to the charge of exploiting what it denounces, but I think it anticipates and incorporates that criticism by making the kids pop-culture puppets. It's not necessarily a classic of JD cinema, but there's more here than may meet the eye at first glance.
Posted by Samuel Wilson at 11:59 PM

My reading of it all is about commodification of human life and thoroughly Marxian take on this. The rich kids rob because they can, insofar as they recognise law at all it is a law that protects privilege.

Aside from this they consume commodities in order to enjoy themselves. They do this in just the same way as I might consume a pie- I own the pie I consume the pie. In a world where working people are too commodities then if I were one of these rich kids then I can consume those- it is a form of conspicuous consumption. Just as the wealthy parade fine furs and diamonds or possess artworks and cars that are beyond the reach of the masses so not everyone is in a position to do this. Not everyone has the sense of entitlement to be able to consume human life for kicks.

So their motives could be boredom or merely to show-off amongst their peers, but this is a form of consumption of the human commodity. In this sense little different from slavery or when unprotected workers are sent into the site of a nuclear event- either in the case of the bomb tests in the US or the cleaning up of Chernobyl during the days of the USSR. In neither case is human life consumed without purpose- but it suggests commodified life is cheap and supply exceeds demand. I would suggest this is the message of Young Violent and Dangerous. In a world where life has become cheapened by commodification it exists solely to be disposed of for the purpose of entertainment, and belongings can be appropriated- after all, what use are the trinkets and hard worked for finery of the proletarian.

I similar message is central incidentally to Kidnap Syndicate, where the lives of the children of others can be incidental and sacrificed on the altar of making a point.

Both films are extremely radical in their political posture.

Interesting reading, Nigel. I know of Di Leo's leftist leanings, but not about Guerrieri. A leftist reading is definitely possible, though the movie isn't overtly leftist and most people watching would probably accept "kicks" as a motive without going deeper than that. Your interpretation does explain why Joe yells ad slogans as well as movie titles, and you definitely have me interested in seeing Kidnap Syndicate. Thanks for writing.

Kidnap syndicate is worth the time but many of the same obsessions rear their head again, particularly on the (utilitarian) value of life. The son of a poor mechanic is kidnapped (accidentally) the same time as the son of an industrialist. While of course this set up lends itself to class based cheap shots (and they are present) there are some interesting questions regarding motivation. James Mason, the rich industrialist, always wins, he is used to winning and risking all to win- but this raises the question of what value the child of a poor mechanic. Sure there can be sympathy for mason, after all what parent would put the life of the child of another before that of their own child? It is where it appears that Mason is very much into this whole alpha male thing it becomes a little more tricky- he will risk the life of someone elses child to save face, to appear strong. This of course is unforgivable.

I suppose we are more familiar in Eurocrime with villains treating working people as disposable- a number of times hostages are thrown from moving cars to disrupt police. I suppose for left leaning directors it was only a matter of time where this was given a wider class element. Especially where marxists see labour as commodified anyhow.

That said, as with this film, Kidnap Syndicate is not without its problems and suffers from uninspired direction and is pretty flat, even by DiLeo standards.

In incidentally taking a leftist reading of YOUNG VIOLENT I took as my starting point the social class of the protagonists and worked forward from there. Since this is exploitation cinema and no doubt rushed out to exploit both topical themes and markets I cannot accept that everything on screen is co-incidental, as genre directors who time and again play things down where it comes to themes and so on make a point of making our nihilist robbers as rich kids.

There was also a trend of this sort of violence taking place in Italy at the time with young delinquents-rich or poor-raising a lot of hell and committing crimes. There were a handful of movies built around this concept. Most of the time, the young savages came from wealthy family's whose parents seemingly abandoned them so as to maintain a strong financial center leaving the children to "get attention" in other ways. Two of the nastiest examples being VIOLENCE FOR KICKS and DAYS OF VIOLENCE. Guerrieri's film is the best of this sub genre I've seen.