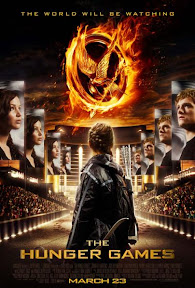 Gary Ross's film of Suzanne Collins's young-adult literary sensation has already done the impossible. It led to an official American DVD release for Kinji Fukasaku's infamous 2000 film Battle Royale, which is seen by some as an influence on Collins's dystopian vision of mortal adolescent combat for public amusement. Battle Royale's kids-killing-kids premise made it unreleasable in mainstream America, and an American movie remake long seemed unimaginable. Here's two cheers for literature, then, for what was thought unfilmable was not unpublishable. Indeed, the Hunger Games movie presents us with the curious spectacle of an adaptation criticized by many for falling short of the novel's violence. The film had to get a PG-13 rating and thus toned down the violence and gore so that the target audience of the unadulterated novel could see the movie. There's a lesson in there somewhere, but let's move on. The Hunger Games didn't strike me as a rif-off or knock-off of Battle Royale. The Japanese film is more a satire of its own time, an exaggeration of existing cultural trends, particularly the country's atrocious game shows, while Collins's novel, on the evidence of the movie, is a more full-blown fantasy. We should resist the temptation to read contemporary political commentary into Collins's quasi-American, quasi-Roman dystopia, Panem. Because the heroes hail from an Appalachian-like, 20th century-style setting, some may want to see Hunger Games as a reactionary populist nightmare of country folk oppressed by a decadent urban elite. But there's no specific political content in Collins and Ross's oppressors: the overstylized fops could symbolize the idle rich as easily as they could the political class. In any event, Ross has already written and directed a dystopia for liberals in the form of Pleasantville, so if the signifiers of Hunger Games skew right a little I suppose it all balances out. Leaving satirical intentions or political relevance out of it, Hunger Games resembles Battle Royale less than it does The Running Man, particularly in the control the masters enjoy over the combat environment and the emphasis on the production process behind the scenes. More importantly -- and this is based on a decade-old memory of Battle Royale that I expect to update shortly -- the Japanese film was ultimately more horrific because the teen combatants were more equal in our eyes, while the efforts of the Hunger Games film, at least, to make players other than the heroes of District 12 sympathetic are pretty perfunctory in all but one case. Overall, Battle Royale is more successful as satire than Hunger Games is as dystopia -- but let's judge Ross's film on its own terms from here on.

For the still-uninitiated, the Hunger Games have been an annual event for 74 years following a failed war of secession against Panem by twelve of its districts. Under the terms of the "Treaty of the Treason," each of the defeated districts must select a teenage male and teenage female by lot to participate in the Games, which can have only one victor. Katniss Everdeen (Jennifer Lawrence) represents District 12 alongside Peeta Mellark (Josh Hutcherson) after volunteering to take her younger sister's place at the annual Reaping. Katniss is a hunter who feeds her family and uses game for barter at home, while Peeta is comparatively unskilled but quite strong. For them and the other "tributes," the Games aren't just a matter of combat and survival. They have to turn themselves into telegenic personalities in the hope of earning sponsorships. Sponsors can have supplies airlifted to their favorite players during the course of the Games; otherwise, if the players can't find food or water themselves, they can die before any rival can kill them. Part of their handlers' effort to put the District 12 kids over is to portray them as star-crossed lovers, which is how Peeta does see things, while Katniss has something closer to a boyfriend waiting and watching back home. Once the Games are underway, however, it's everyone for himself or herself, at least in theory. In fact, as in Survivor-type shows, temporary alliances form and Peeta falls in with an aggressive group that trees Katniss for a time, while Katniss gets a more likable ally who helps her escape that predicament. Meanwhile, District 12's mentor Haymitch (Woody Harrelson), a past Hunger Games champion who sobers up gradually as he comes to care for the new kids, works the wealthy patrons to get sponsorships for Katniss and Peeta, while this year's HG producer Seneca Crane (Wes Bentley) grows increasingly confused about how to exploit Katniss or control the repercussions of her unpredictable behavior.

Ross has been criticized sharply in some quarters for using a "shaky-cam" style to film the action scenes, but I have fewer problems with that approach than some observers do. I'd actually like to think that it was a homage to Fukasaku, the pioneer master of handheld action filming, but the shaky-cam approach is so commonplace now that using it implies no acknowledgment of influence. For a PG-13 it was probably the best approach because the camera needn't linger on wounds and blood. In general, Ross eschews epic framing, employing handheld cameras most of the time (or so I think) during the District 12 scenes. Only during the scenes in the Capitol does he visualize things more classically to maximize the spectacle of the CGI sets and stunts like the garments of flame that Katniss and Peeta wear during the parade of tributes to impress the audience. That "girl on fire" business is one of the few nearly visionary moments of a film that is directed efficiently and unobtrusively most of the time. The real spectacle of this film is Jennifer Lawrence, who is virtually the character she played and parlayed into stardom in Winter's Bone -- if that character were given the means and motivation to kill her antagonists. She will have to find different work fast to avoid permanent typecasting as a white-trash valkyrie -- could she become the Claudia Jennings of our time? -- but she does it so well that you don't mind the reprise. Lawrence is the best thing about a film that paradoxically starts losing steam once the main action gets underway. This has nothing to do with how Ross films the fighting, but with the odd lack of urgency that eventually prevails as the kids spread out, take sides, seek shelter, sack out for the night and sometimes kill each other. The arbitrary rules changes that are important to the plot also slacken the tension upon which films depend more than novels, and by the time the mutant dog creatures are sicced on the final quartet in an effort to speed the conclusion of the Games I found myself checking my watch and wondering when the film would end. By the time the film did end I found myself wondering what the two inevitable sequels could do with the characters and their world with the Hunger Games hook out of the way. That just shows you what I don't know, but I would think the only direction the story could go to justify sequels would be rebellion against the Capitol, and I don't see that developing organically yet from Katniss's first adventure. But as long as Lawrence is in for the duration I'm at least willing to listen to what the sequels are offering.
Posted by Samuel Wilson at 11:04 PM

I liked THE HUNGER GAMES very much, but I also like your review. After hearing so many critics decry the books and film as derivative of BATLLE ROYALE (which I've never seen,and which Suzanne Collins says she's never seen either), it's nice to read a review which acknoweledges the similarities but judges the film on its own terms.
I can't deny that the tension in the film version of the Games is muted and that somewhat weakens the film's impact. You never feel the full and terrifying sense of danger for Katniss and the other particpants that comes through so clearly in the book.
However, having read the entire trilogy, I can assure you there are places for the story to go, and you are intuiting them correctly. The film's ending is much more ambigrous than was the orignal book in setting up the next chapter; Collins ends each of the first two books - and every chapter of the entire trilogy, for that matter - on a tantalizing, cliff-hanging note. I will tell you that CATCHING FIRE, the second book, was probably my favorite of the three.
But if Ross is going to film the remaining books, he needs to develop some action directing chops. They get progressively more brutal and action-driven, and his restrained approach in the first film will not work.

Thanks for writing, Patrica; I appreciate a voice of experience. My hunch is that the film runs too long to sustain the tension and menace you got from reading the novel, at least the way Ross directed it. But if the studio feels PG-13 essential to the success of the movie series, I'm not sure if any director could do justice to the violence you describe. We'll see.