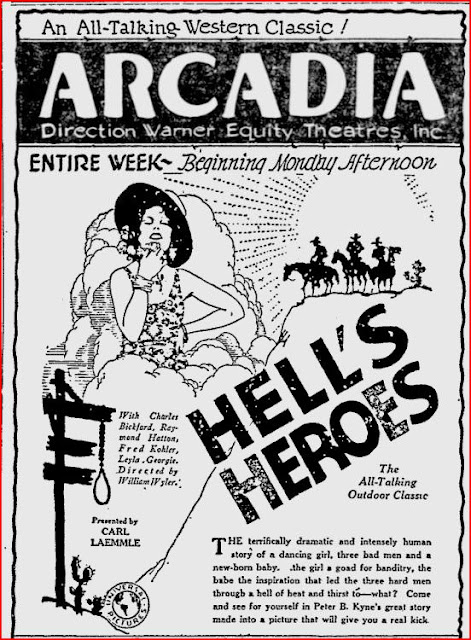 Almost one hundred years ago, Peter B. Kyne published the novella The Three Godfathers. His allegory of redemption through sacrifice has been filmed seven times since then, starting with a Harry Carey starrer in 1916 and ending with a relatively loose TV adaptation, The Godson, with Jack Palance in 1974. The best known movie version is John Ford's, starring John Wayne, from 1948 (Ford's silent western Three Bad Men is unrelated). Ford's version actually comes closest to Kyne's original (now widely available as a free e-book) in many respects, particularly in its religiosity and its resolution of the story through a miracle. The Ford Godfathers still has more of a happy ending than the original story, while the two previous sound adaptations are stunning bleak. Traveling backward from Ford, we find Richard Boleslavski's virtually existential version from 1936, in which the Bible is replaced by Lewis Stone's book of Schopenhauer's philosophy -- when Walter Brennan asks if it's a joke book Stone concedes that it could well be seen that way. Hurtling back to 1929, William Wyler's early talkie is a less pretentious, far grungier version. If anything, that makes the story even more bleak than Boleslavski's rather forbidding interpretation.

With so many versions floating around, you may know the basic story. Three bad men (in some versions there's a fourth initially) rob a bank one December and flee across a desert to escape a posse. Expecting to refill their canteens at a natural "tank" en route, the bandits stumble across an expectant mother alone in a covered wagon, going into labor. They learn that her husband accidentally destroyed the tank, leaving them without water beyond what's left in their canteens, and disappeared in the desert. The mother dies shortly after giving birth and tasking the bandits with bringing the baby to civilization. Spurred by some sort of race instinct, and helped along by a little bibliomancy, the men set out to bring the baby to the town they had fled, regardless of the risk to themselves. Two of the three die along the way.

In Kyne, the final bandit survives through divine intervention -- the appearance of a donkey to take him the final leg of the journey. Ford builds this miracle into a happy ending, giving John Wayne a new life to look forward to after serving a minimal sentence for his crime. Kyne's original ends with the surviving bandit delivering the baby to the New Jerusalem church. By that point the bandit, despite his lucky break, has been reduced to an incoherent gibbering wreck by his desert ordeal. It is unclear whether he'll actually live, but whether he does is irrelevant to Kyne's story. The Wyler and Boleslavski versions eliminate the ambiguity by having the last bandit drop dead in the church during a Christmas service. We can guess that he hasn't just fainted because we've seen him drink from a pool of arsenic-tainted water on the premise that he'll get energy for his last run before the poison kicks in. I don't know whether Wyler's writers invented this idea or carried it over from one of the silent scenarios. But it's interesting, considering how beloved the Kyne story was supposed to be, that at least two movie versions dispense with the climactic miracle and other religious elements that presumably gave the story its inspirational or allegorical power. Without the Christian framework, the bandits' trek can seem less redemptive than simply foolhardy. Obviously from a secular perspective you can still argue that they're doing the right thing for the baby's sake, but Ford seems to have understood that it isn't enough for them to deliver the baby to civilization. For the godfathers really to have accomplished something in our eyes, at least one of them ought to survive the ordeal. Absent that, there is only a grim irony in their equation with the Kings or Wise Men of the Gospels. The bandits in Wyler's film openly scoff at the idea of themselves playing such a role. But I suppose they play it just the same.

Hell's Heroes was part of a short-lived trend of A-level westerns shot on location following the smash success of In Old Arizona. Wyler certainly makes the trek seem like an ordeal with lengthy tracking shots of his heroes trudging through genuine desert. Contributing strongly to that impression is the overall decrepit appearance of the godfathers -- not stylish outlaws but ragged, filthy ruffians from the start. They're an unheroic looking bunch, their leader (Charles Bickford) the most reluctant to take on the little brat. Bickford was still being built up as a star at this time, though he was destined to prosper as a character actor for another 40 years. He lacks star charisma and no effort is made to glamorize him, despite the advertising's effort to play up a romantic angle that doesn't exist in Kyne. What makes Hell's Heroes stand out as the Pre-Code version of Three Godfathers, compared to the Enforcement-era Boleslavski and Ford versions, is a catfight staged in a New Jerusalem cantina before the bank robbery, as a Mexican and Anglo girl go at it over Bickford. As Bickford's cohorts, Raymond Hatton and Fred Kohler seem authentically primitive. Wyler arts up the proceedings occasionally, having one character shoot himself in the shade of a blatantly cruciform tree -- this being Pre-Code, we can almost see the man do the deed as his buddies walk away from him toward the camera. Most notably, he cuts in close-ups of a noose late in the picture to illustrate Bickford's desperate, dehydrating delirium. Despite Wyler's efforts, Hell's Heroes, while often impressive pictorially, compares unfavorably to the mythic sincerity of Ford and the tragic poetry of Boleslavski. That leaves Wyler with the pathos of sacrifice or renunciation that was typical of the era that was ending as his movie premiered in the autumn of 1929. The core idea may be to save the baby, but the bandits' sacrifice may have been an end unto itself for Twenties audiences -- something they either empathized with or yearned to comprehend. The emphasis on sacrifice makes the godfathers resemble three crucified criminals more than the Wise Men at the manger, but I suppose that still makes Hell's Heroes a sort of Christmas movie. Not one for the children, probably, but one that definitely says it's better to give than to receive -- whether it convinces you or not.
Posted by Samuel Wilson at 12:35 AM