James Cagney was an unprecedented movie star, a distinctive produce of talkies and Pre-Code cinema, a sexy thug. Think of the tough-guy stars of silent movies, or Cagney's tough-guy peers in the early Thirties: hulking slabs of beef like Wallace Beery or George Bancroft. A certain burliness was expected of film's top brawlers. By comparison, Cagney was a runt, but he made up with ferocity (making "Tarzan look like a sissy") what he lacked in mass. In fact, he overcompensated. Cagney's stardom is impossible today, insofar as violence against women, exemplified by that grapefruit smashing into Mae Clarke's face forever, was a key part of his persona. It was something Depression audiences wanted to see, and I don't think they had something against women. Sexy brutes like Cagney and Clark Gable were the sort of charismatically ruthless survivors -- interestingly, "caveman" was a popular label for them -- that audiences wanted to be or wanted to have in hard times. They were suited for those new hard times in a way many slightly older matinee idols -- John Gilbert, Ramon Novarro, Richard Barthelmess -- weren't. Roy Del Ruth's Cagney vehicle emphasizes the contrast between its star and the older type by showing Cagney the scrapper succumbing to the temptation to become a "powder puff" -- a pejorative associated with Rudolph Valentino, the dead exemplar of the old stardom.

Introducing Winner Take All on a night dedicated to child actors, TCM host Robert Osborne strained to emphasize Dickie Moore's role in the picture as proof of the influence on Warner Bros. of The Champ, M-G-M's Oscar-winning hit about a boxer and a kid. But Winner is plainly a riff on Cagney's persona, and Moore's role is relatively insignificant and unsentimental. Cagney plays Jim Kane, a contender taking a sabbatical from the ring, implicitly to dry out. We first see him as the beneficiary of a benefit night at the arena, the fight fans throwing money into the ring for him as he makes a halting speech of thanks. He's sent west with a friendly warning from his manager (Guy Kibbee) and his second (Clarence Muse) to lay off the high life and keep out of trouble. In his exile he falls for a young single mother (Marian Nixon) who'd once waitressed at Texas Guinan's legendary nightclub, and takes a tough fight to raise money for her when her insurance company stiffs her. Once word gets out that he's fighting again, Kibbee calls him back to the big city, where his handsome brutality captivates a socialite (Virginia Bruce) who invites him to a high class party and otherwise seduces him. Bruce shows off some seriously low-cut lingerie to get the job done, and our hero soon forgets the mother and son out west.

Not realizing that the socialite is turned on by his freakshow value as a broken-nosed, cauliflower-eared brute, Jim decides that he should make himself more attractive to her and has plastic surgery. To preserve his new good looks, he adopts a dancing defensive style in the ring, winning fights easily but displeasing fans who want a good old-fashioned scrap. His new habits earn him the "powder puff" tag, and Kibbee warns him that he's risking his career. In one tremendous moment, Kibbee shows who's boss by laying out the intractable Cagney with one punch. Still, Jim's determined to do things his way, even when he learns that he's begun to bore the socialite, who walks out on him in mid-fight one night. Desperate to impose his will, he insists that she sit in the front row for his next bout, but learns just as the bell rings that she's taking passage on an ocean liner instead. Learning that he has only 20 minutes to reach the ship and stop her from leaving, he abandons his new style in a hurry to knock his man out as soon as possible. Ruining his new face in the process, he gets the job done and rushes to the docks in his boxing trunks, only to find the socialite trysting with another man. Now knowing the score, he kayoes the interloper, gives the socialite a kick in the rear, and heads home to make his apologies to the little mother from out west, who'd followed him back to New York only to be blown off shortly before. The film ends with adorable little Moore bopping our hero on his bandaged nose. 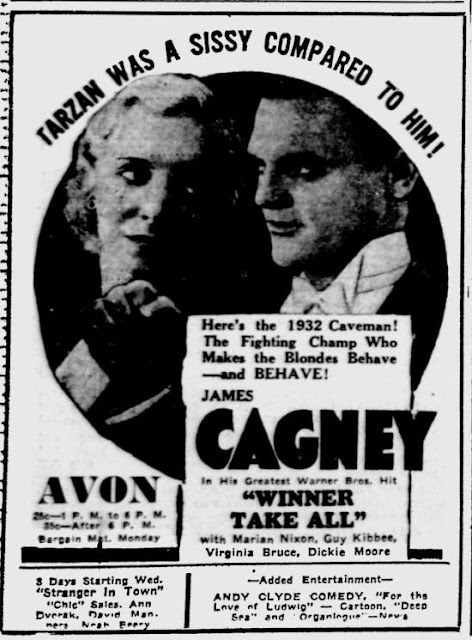 Winner Take All puts Cagney into some fish-out-of-water situations with predictable results. Asked for his opinion of the Soviet Five-Year Plan, Cagney tells a society gathering that he doesn't trust those installment schemes and always pays in full up front. When a butler laughs at this, Cagney lays him out. Apart from Public Enemy, Cagney was mainly a comic figure in the Pre-Code era, a transgressor who gets away with what we wish we could -- usually smacking the sort of people we wish we could. Again, it says something about the era that his victims so often include women (he gives his niteclub date in the flashback a face full of seltzer water), but it doesn't look like many women objected back then. His violence was essential to his manhood, and Winner underscores this, stressing that it's not merely the physical grace that Cagney was praised for later but his willingness to mix, to put his chin out, get as good as he gives, that defines him. Cagney himself apparently disagreed, and the publicity for Winner acknowledges that it led to conflict between star and studio. Money may have been the provocation -- Cagney didn't like that he was making less money than Dick Powell -- but the actor was also unhappy with the limited range of roles that Winner seemed to enforce. A year later, he was singing and dancing for Busby Berkeley in Footlight Parade, but Winner showcases his dancing skills in the squared circle. The ballyhoo had you believe that Cagney was so convincing as a boxer that you'd assume he'd fought professionally. But Winner's fight scenes are not much less pantomimic or risible than those in City Lights. They don't exactly remind me of period fight films. But they express the idea that Jim Kane is first a nonstop scrapper, then an untouchable dancing master. In any event, the film is a comedy, so we probably should seek pugilistic realism elsewhere. What we have in Winner is a relatively minor Cagney comedy that nevertheless ought to be essential viewing for his fans for the way it struggles to figure out who exactly Jimmy Cagney the movie star persona was: lover, lout, or both.

We can't wrap this up without the original trailer, provided as usual by TCM.com