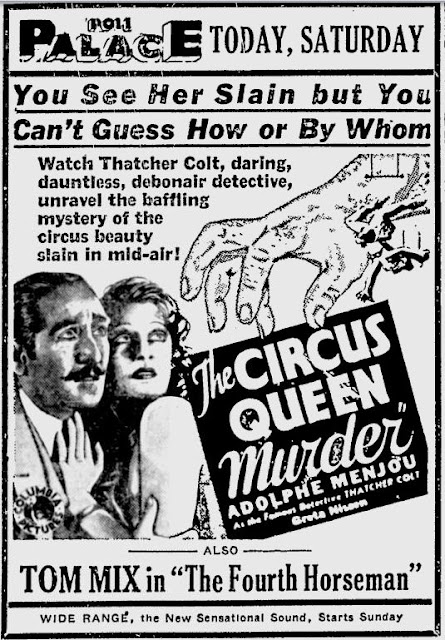 Pre-Code pictures from Columbia Pictures are still a rarity even on Turner Classic Movies, so I shouldn't kick if Roy William Neill's mystery movie turns out to be a sequel. It's the second and last film in which Adolphe Menjou plays Thatcher Colt, a New York City police commissioner who solves mysteries on his own. Colt was the creation of Anthony Abbott, and Abbott himself was the creation of Fulton Oursler, the author and editor best known under his own name as the modest writer of The Greatest Story Ever Told, his novelization of the Gospels. His Abbott books about Thatcher Colt were popular enough for Columbia to adapt The Night Club Lady in 1932, and that was promising enough to get us to The Circus Queen Murder. Neill didn't direct the first Colt picture, but for me, knowing nothing about Thatcher Colt, the director was the most promising feature of Circus Queen. He was one of Columbia's secret weapons, amid all the acclaim for Frank Capra, and responsible for two of the studio's most successful 1930s experiments in horror, the voodoo thriller Black Moon and the Karloff twin act The Black Room. For Circus Queen Neill got to work with Dwight Frye, who here gets one of the biggest roles of his career. Whatever Circus Queen's flaws it's a must for fans of Frye, because it gives him a chance to play the villain of the piece -- not a stooge, not a red herring, but the actual villain, the one who dunnit.

The problem with the picture is that there isn't really any mystery about who dunnit. For it's first half, Circus Queen is more of a who'll do it picture. It opens with Colt deciding he needs a vacation from crime and reporters. Throwing a knife at his map of New York State, the commissioner decides to take his vacation in the town of Gilead ("There is balm in Gilead," he recites hopefully), with his faithful secretary Miss Kelly (Ruthelma Stevens, returning from Night Club Lady) in tow. They arrive in town at the same time as a circus and watch the parade through Gilead. Colt has been teaching Kelly lip reading, and as the parade passes by she notices star aerialist Flandrin (Frye) arguing with his wife, fellow aerialist Josie La Tour (Greta Nissen). She makes out that Flandrin is threatening to "kill both of you," moments before a burst balloon spooks Josie's horse, forcing Flandrin to rescue her. Turns out that Josie's been cheating on Flandrin with a third aerialist, the Great Sebastian. Sebastian is no Cornel Wilde, however. Rather, he's played by that seductive devil, Donald Cook. If you remember Cook as Jimmy Cagney's semi-shellshocked, self-righteous brother from The Public Enemy, you may be wondering about that "seductive devil" idea, but remember: he's competing with Dwight Frye!

Once it comes out that several circus performers have received death threats, Colt reluctantly gets involved in the local investigation, but no one will listen to his advice to cancel performances. Surprisingly, Flandrin appears to be the first victim, suddenly disappearing with only bloody clothes left behind in his wagon. Suspicion focuses on a troupe of "Congo cannibals" who double as circus musicians; there's some confusion over whether they started with thirteen or fourteen men, but there's only thirteen now, and people worry about number fourteen. For your information, these aren't just a gang of American blacks in costumes; we're to understand that they're all authentic Africans, and I learn that Oursler/Abbott treats them more sympathetically in his novel than they're treated here. On film they seem about as authentic as the wheezy man in the gorilla suit portraying a caged brute in one scene. In any event, they're a bunch of black herrings.

Thatcher Colt's gimmick was that he used modern scientific police methods to solve crimes, the Abbott novels being proto-procedurals. In the movie, Colt quickly figures out that Flandrin has faked his death, planting animal blood (from his wife's murdered dog) to fool the marks. Colt also deduces that Flandrin spent a night in blackface among the cannibals, having counted fourteen rather than thirteen men in their tent. The problem is that Flandrin hasn't committed any crime yet -- it can't even be proven that he killed the dog. All Colt can do is try to keep an eye out for Flandrin, the man having taken his leave of the cannibals, and again urge the circus to cancel the next show. Nothing doing on that front; this is a movie, after all.

You'll notice that the newspaper ad above informs us that we can't guess how Josie La Tour is going to die. Don't you believe it. We see a shadowy figure climb the outside of the big top, with no one watching while the show is on. This is Flandrin, who watches from the literal big top as Sebastian narrowly escapes a sabotaged trapeze. As Josie starts her act, Colt is caught up in the paranoia over the cannibals. As they play while she performs, Colt notices that their reed instruments could pass for blow guns, the recognized cannibal weapons, and are aimed right at the aerialist. Not that he tries to stop them, of course. Meanwhile, Flandrin continues to watch from above, and I guess we're not supposed to notice him blow his wife a fatally pointed, poisoned kiss with his own weapon. Neill builds up some decent suspense in this sequence, but it dissipates with the hero's utter failure to discover or thwart the real threat.

In fact, Miss Kelly is the only person who seems to notice a shadow crawling down the tent. She leaves the tent to investigate, but that only sets up the final confrontation, as Flandrin takes her hostage to force Colt to give him a free shot at Sebastian. Flandrin has nothing to lose and tells Colt he plans to kill himself afterward, so the real mystery is how Colt can get Kelly out of his mess. That I won't spoil in case someone wants to see this for Frye's sake. He's in sullen, surly mode, more like his Wilmer Cook in the original Maltese Falcon movie than his Universal hysterics, and his glowering resentment actually makes him an effective menace. The one thing the story does well is establish Flandrin as a single-minded yet unpredictable loose cannon, and Frye lives up to the opportunity. By contrast, Menjou practically sleepwalks through his bland hero role, though his innate charisma remains irrepressible. Overall, Circus Queen Murder goes out of its way to alienate the audience. 1933 moviegoers may have been practiced lip-readers from the silent era, but I suck at it and had no idea what Menjou and Stevens were saying silently to each other in their early practice. On top of that, Josie and Sebastian play one scene out in German, apparently only so Colt can demonstrate that he also knows the language. Maybe these scenes make the movie a mystery, since they're the most effective at leaving us utterly baffled about what's going on. At least it all looks good. Columbia Pre-Codes are strong on cinematography, and Joseph August (who worked with Neill on Black Moon) works the contrasts quite nicely.  He helps make a pleasantly dumb picture that much more pleasant to watch. I recommend it for the star turns, Frye's especially. He didn't get that many chances in the spotlight like this, so you may as well enjoy it.

Posted by Samuel Wilson at 8:00 PM

I hadn't heard of Black Moon or The Black Room but now I want to see both of them. Neill was always a pretty reliable director.

For more on Black Moon, check out my review from 2009, when I first saw it on TCM. Black Room made it onto videotape back in the 90s and is definitely a treat for Karloff fans.