Outside of New York City, Miami is probably the biggest movie market we've been visiting regularly this year. You could deduce that from the fact that Miami is getting Lawrence of Arabia before the other places. Check out all the live ballyhoo that came with a roadshow premiere in a big city fifty years ago. 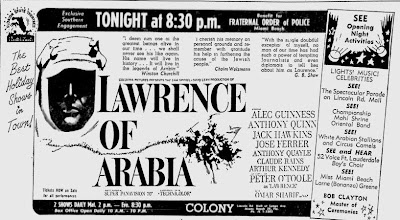 Nowadays, I suppose, no one thinks any of this necessary to sell an "event" movie. Who in 2012 can imagine a parade and a boys' choir, or even the appearance of a beauty queen, to open any movie, even something in 3-D and IMAX. Of course, there's no point to any one theater in any community going to such trouble when the same movie's going to play on possibly dozens of screens in the general vicinity. Here, the Colony theater will probably have Lawrence exclusively, on a reserved-seat basis, for the next several months, and the eventual Best Picture Oscar winner may not reach some markets at "popular prices" for another year. That kind of slow rollout is alien to our moviegoing mentality today, when everything's about setting some opening-weekend record. Some people like the modern way better because the old way seems like a class system and they don't want to wait months to see the most-hyped films. There's justice to that argument, but there's something to be said for the ballyhoo, too. It was part of the publicity of movies, by which I mean not just the advertising but the sense that a movie was a public event that brought people together for a memorable shared experience, not something to be handed out to each person who then runs off to enjoy it in private -- which seems to be the way our culture is headed. Change always brings trade-offs, of course, but what's lost is sometimes as much worth noting as whatever we gain.

There'll be one more "Now Playing: 1962" entry on Monday featuring the New Year's Eve showings of various "first hits of 1963," but I don't plan to continue into that particular year. I do intend to do something along "Now Playing" lines in 2013. Right now I'm leaning toward merging it with another regular feature on Mondo 70. I have a year in mind but I'm still looking for a specific place and specific content on the Google News Archive to realize my objective: one year at the movies in a single American city. Drop in next Tuesday or Wednesday to see what I come up with.
Posted by Samuel Wilson at 12:44 PM