Tourists in 1970s Italy considered it their lucky day, and perhaps the highlight of the entire trip, if they managed to catch a glimpse of a man defecating in public. Japanese visitors especially, according to Bruno Corbucci's film, were so fascinated by this picturesque slice of la dolce vita that they'd drop everything and forget their surroundings in order to take snapshots. Unfortunately, once an eccentricity becomes a trend, the criminal element takes notice. Highly organized snatch-and-grab gangs would send men out in broad daylight to drop trou and squat near hotels or wherever foreigners congregated. While the cameras flashed, the pseudo-pooper's fellow perps swooped by with practiced efficiency, relieving the tourists of their luggage before the decoy had zipped up and buckled his belt. For native victims, the plans were less elaborate: flour in the face in the marketplace, for instance. Or they dispensed with advance preparations entirely, simply snatching or grabbing on their motorcycles. Even dogs got into the act -- for what reward, who can say?

Crime ruled the streets of Italia '70, but the law-abiding public had a strong fictional line of defense in a host of tough cinematic cops who formed their own film genre in this land of genres. Among these mighty men was Inspector Nico Giraldi, a very plain-clothed detective in the Anti-Theft Squad. As played by Tomas Milian, the Lon Chaney (Sr.) of his time and place, Giraldi is an amiable grotesque. He doesn't hide his influences; his apartment is festooned with Serpico posters, and he has a little white rat of the same name -- no reflection on the historical Serpico, one hopes. He also has a bird named Callahan, but unlike the rat the bird stays home. But if Giraldi wants to be Serpico, he ends up reminding me more of Mick Belker, the feral cop on Hill Street Blues. His slovenliness is a sight gag in keeping, from what you might have noticed, with this film's essentially comedic nature. It makes him an unlikely ladies' man; having scored with one woman he had earlier saved from rape, he sleeps in his wool cap and socks and three layers of sweaters. Why? "I'm afraid the heat'll get turned off." It makes you grateful that Smell-O-Vision did not get more popular. 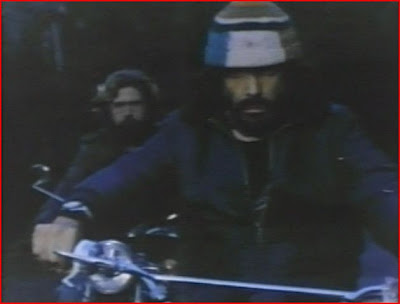 As a comedy cop movie, Squadra Antiscippo is aimed at a more mature but not really more sophisticated audience than Bud Spencer's Flatfoot series. It doesn't have a very strong storyline and is easily distracted from it. Giraldi's main agenda is to bring down the fences who finance the muggers, but he finds time to settle a mild personal feud with a pickpocket who leaves heckling messages on his answering machine. His hunt for fences puts him on the trail of the Baron, the leader of a robbery gang that appears to bite off more than it can chew when it nabs four billion lira (in dollars) from American gangster Norman Shelley (Jack Palance). We've seen what this remorseless man is capable of; earlier he had put an underling to death by carbon monoxide poisoning by locking him in a car. Terrifying, no? So now it's a race between Shelley and Giraldi to see who can catch the Baron first, and if the Cop in Blue Jeans wins that race, his troubles may just be beginning.... 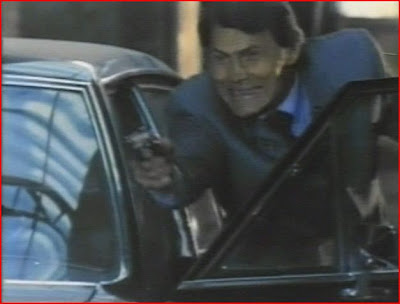 The most surprising thing about this film is that it inspired ten sequels over the next eight years, culminating in a film known in English as Cop in Drag. Squadra Antiscippo is a mostly uninspired film with nothing I haven't seen done better in other Italian cop films. The action highlight is when Giraldi chases some muggers up several flights of stairs from doorstep to rooftop of a tenement on his motorcycle, while the climactic battle between Shelley's men and the Squad is utterly by-the-numbers. I may not be getting the full Milian performance due to a weak dub, but Nico Giraldi is pretty drab compared to the monstrous villains he played in several Umberto Lenzi films or his spaghetti western characters. As for Palance, I'm surprised he even bothered dubbing his own voice. He gives a perfunctory performance, but the writers didn't exactly give him much to do. I hope he was paid well for having to sell Milian's knee to the nads in a climactic scene at the American embassy. The liveliest thing about the film is the score by Guido and Maurizio De Angelis, which features a free-jazz saxophone writhing through the action scenes. Like nearly all Italian films from this era, it at least sounds good. But if you're looking for hardcase tough-cop action in the Italian manner, look elsewhere. And if you're looking for more lighthearted tough-cop action, look elsewhere too.

But do the film the courtesy of examining its Italian trailer, uploaded to YouTube by xploitedcinema:

Posted by Samuel Wilson at 9:49 PM

Really nice review, Sam. I think I enjoyed the movie more than you did, though. I have one or two of the sequels around somewhere. You may want to give EMERGENCY SQUAD a look, too. It has Milian in a similar role trying to bring down another gangster this time played by Gaston Moschin (MILAN CALIBER 9). It was an okay film, although it gets a lot of praise in fan circles. The NoShame DVD is very nice. The NoShame Italy DVD for COP IN BLUE JEANS has the dub in addition to the Italian dub and also a Milian documentary in Italian only.

venom: I just picked up a widescreen copy of Emergency Squad in a cheapo 5-film set for $5.99 at Borders. It also has The Long Arm of the Godfather and Magnum Cop as well as two I've already seen: The Violent Professionals and Big Guns (aka Tony Arzenta). It isn't VideoAsia this time, but I don't know if it's that much more ethical.

Well all those NoShame US discs should be OOP now, so bootlegs are the way to go unless you want to spring for a foreign disc. Those don't always have English dubs or subs.

MAGNUM COP is an aka for FEARLESS FUZZ (1978) starring Maurizio Merli. I reviewed it some time back. It's very different from Merli's other movies. He was in a transitional stage at that point in his career. You also get some nude Joan Collins.

I played the part of Ballarin in the first 5 films in the Nico Giraldi series (you can see me behind Tomas in the first image).
What a non-Italian speaking person doesn't realize is that this film IS WORTHLESS without speaking not only Italian but the low class Romano accent used in Rome. Antiscippo was the 3rd biggest box office hit of the year ONLY based on the acting and dialogue of Tomas Milian (who is always dubbed due to his Cuban accent). FWIW... JOHN DULANEY (facebook.com/johnpdulaney)