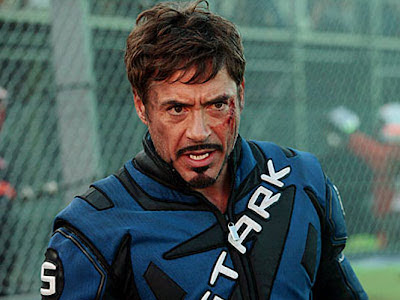 As a longtime comic book reader, I'm used to picking up a monthly title and finding myself in medias res. Buying a single issue and getting a self-contained story is pretty rare these days. Even if you get one, the issue is usually so thick with subplots carried over from previous installments or foreshadowing of future events that a casual reader might get frustrated when he's expected to be hooked into buying future issues. I don't think this is a good idea, but I've grown accustomed to the convention to the point that it doesn't bug me too much. So I was prepared for the narrative approach of Jon Favreau's new film, which is not merely the sequel to his own Iron Man but chapter three (following The Incredible Hulk) of a larger story that doesn't have a formal title yet, and for which at least three more chapters are planned, not counting the possibility of Iron Man 3. Of course, in those innocent days of 2008 most people didn't know that Iron Man was chapter one of anything but its own franchise until after the end credits. Two years later the sense that there's something basically incomplete about the new film is inescapable, since Samuel L. Jackson is parading around with his eyepatch and his ridiculous jacket in the main body of the film. And he exposes the fundamental cheesiness of the, for want of any other name, "Avengers Initiative" concept with his performance. Because he isn't giving a performance in the sense of playing a character. He's simply doing "Samuel L. Jackson," and while that may be the only way he can stand up to Robert Downey Jr, the blatancy of his cliched presence makes it hard to regard the "Avengers" thing as anything but a corporate mandate that compromises the integrity of anything it touches. This subplot (or metaplot) is hardly advanced in Iron Man 2, so that Jackson's interventions fill the film with dead rather than hot air. They add to the impression that there's too much going on for Favreau and writer Justin Theroux to wrangle into proper narrative shape.

But don't you suppose that Tony Stark has an eventful life and many enemies? If you do, then you shouldn't be surprised if things seem to hit him from several directions at once. Iron Man 2 actually does have a narrative structure; it's built on the magnetism of Tony Stark, his knack for attracting trouble and disaster to himself. It seems to lack focus because we're still used to superhero movies being focused on a supervillain or an extraordinary threat. But the Iron Man films are star vehicles in a way, arguably, that no other superhero film has been before. The drama of the new installment is to see how he copes with all the crap coming his way. Let's see: a crazy Russian genius is out to kill him, not knowing that Tony's own technology is doing the job pretty well; the federal government (or specifically one powerful Senator) wants him to turn over the Iron Man technology, and will use Tony's somehow-transformed pal Jim Rhodes to do it; his business rival Justin Hammer is tight with the Senator and the military, and later recruits the crazy Russian to his side; and Pepper Potts is jealous of Tony's new personal assistant "Natalie Rushman" and more exasperated than ever, despite his promoting her to CEO, at his reckless behavior. It's not for you to make sense of it all; your job is to watch Robert Downey roll with the punches and throw some of his own.

Favreau's Iron Man films are a breath of fresh air in the superhero genre because they dare speak the truth that even the best Batman films, for instance, sidestep: the main reason the hero does what he does is because he can. And in this case the hero openly enjoys doing it. But what you might expect to come off as insufferable arrogance comes across as honesty instead. Neither the man nor the mask is a put-on or a penance. Tony Stark is not just an alter ego; he is the hero of the movie, and Iron Man is just a suit he wears. That's why this film can get away with having him in the suit relatively rarely -- and they could actually have done without at least one suit scene this time. These films are also unique to the genre for embracing a political context, even if the politics of the sequel are dubious or muddled. Parts of Iron Man 2 sound like Ayn Rand with a sense of humor, but it's unclear whether Stark has recanted some or all of his "privatized world peace" viewpoint by the film's close. In any event, Tea Partiers are likely to dig this movie, but don't hold that against it.

Iron Man 2 has plenty of flaws. Its best action sequence, the Russian's attack on Stark at the Grand Prix of Monaco, comes way too early in the movie, and none of the CGI armor wars that follow can match that scene's flair and inventiveness. The scene I would have gotten rid of is a rock-em sock-em slugfest between a drunken Stark and Rhodes in stolen armor. I expected someone's helmet to come flying off to end it, but they did nothing that clever in the whole fight. In fact, the only other really good action sequence is "Natalie's" demolition of a dozen or so security guards, humorously intercut with actor Favreau's desperate combat with a single flunky. Scarlett Johansson is welcome to return in future Marvel movies. There does seem to be an inherent limit to creative fighting for armored characters. Meanwhile, both villains were underwhelming. Mickey Rourke as the Russian is built up as the main menace, but has to yield the floor for the middle third of the picture to Sam Rockwell's flamboyant idiocy in the role of Justin Hammer. Rockwell is far over the top here. He made me think of Dana Carvey doing Gary Oldman; too infantile to be threatening, though I grant that the film's comedic nature doesn't require a very high threat level. Rourke is a menacing physical presence, but his character is just a collection of quirks (e.g. fond of birds) and the actor is slightly unconvincing as a Stark-level technical genius. He seems more like someone who, instructed by Rockwell figuratively to "take a dump on Tony Stark's front lawn," might obey him literally. Finally, the film just stops instead of having a proper ending, probably because Marvel insists that the real ending is what comes after the credits roll, the now-traditional extra scene that sets up more Avengers continuity. I won't spoil it but I will say it's not really worth waiting for as long as you know what the next films are on the Marvel schedule.

But I liked the film because there's still some novelty to Favreau's approach and mainly because of Downey's dominant performance -- though Gwyneth Paltrow as Pepper really picks up the fast-talking romantic-comedy pace this time as well. I paid my eight bucks to see him play Tony Stark and I was not disappointed. Maybe I've reached the point where I'll tolerate a lot for his sake (I liked Sherlock Holmes too, some will recall), but I found Iron Man 2 easy to tolerate. I'm less demanding here than others may be, and I'm not going to go out of my way to defend it from its critics -- I think I've been critical enough myself to give people who aren't comic-book or Downey fans warning. Both Iron Man films are among the better superhero movies, but I worry that the Avengers imperative can only compromise the integrity of future films and the Favreau-Downey conception of Tony Stark. For all I know, this might be the last good Iron Man movie, so let me savor it a while.
Posted by Samuel Wilson at 7:29 PM

"Tony Stark is not just an alter ego; he is the hero of the movie, and Iron Man is just a suit he wears." Well said there. I agree with you in that this is a rarity in terms of comic book films where the real and the alter ego have been merged into one.

A pretty enjoyable movie no doubt, but for me it didn't match the kind of breath of fresh air brought in by the first part. Robert Downey Jr. is eminently watchable as always, and he's the one who mostly carries the film forward for the viewers.

Scarlet Johansson, Samuel Jackson, and yes, even Mickey Rourke have not been properly utilized. But the surprising element of the movie turned out to be Sam Rockwell - his little jig before introducing his own set of killer robots might just be the most memorable sequence of the entire film.

Rockwell played Hammer as a snake oil salesman in the wrong line of business. He'd be more believable as a used car salesman. But, then again, this is the guy who got to play Chuck Barris in "Confessions of a Dangerous Mind".

I second the notion on Scarlett Johansson as Black Widow. Oh, what might've been if Fox had cast her and not Jennifer Garner as Elektra a few years back.

Sammy, you & I both know the old rule in comics that if you don't find a dead body, chances are the villain you think died will return. That said, I don't think we're done with Ivan Vanko just yet, but you never know with Marvel anymore.....

Thanks for writing, folks. I didn't really care for Rockwell, though I might have tolerated him more had Rourke's character been more of a threat. Then there would have been room for a more comical villain. Hobby, I wouldn't hold my breath waiting for Vanko to return. They'll want bigger fish to fry next time, though I'm not eager for a third film if it ends up being more Avengers-centric. My hope is that Stark's relegation to "consultant" status means that Downey won't actually have much to do with The Avengers. What I'd really like, of course, is for The Avengers to have little to do with Iron Man movies.