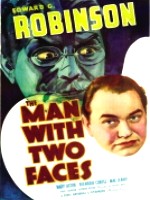 Adding strength to strength, the Albany Public Library is starting to add Warner Archive titles to its already-formidable DVD collection. Given widespread complaints about pricing and quibbling over picture quality, this looks like a great idea that other libraries should emulate. It gave me the chance to sample my first Archive disc, an Archie Mayo film for Warner Bros. (actually under its alt-brand First National) starring Edward G. Robinson that I'd never heard of before.

The Man With Two Faces, promoted with ballyhoo touting Robinson as a Lon Chaney-like character creator, was adapted from a play, The Dark Tower, by Algonquin Round Table stalwarts George S. Kaufman and Alexander Woollcott. The original title survives in its original role, as a play within the play. The play's in tryouts, and will mark the comeback of famed actress Jessica Wells (Mary Astor), the sister of equally famed thespian Damon Wells (Robinson). Jessica had dropped out of the theater after a disastrous marriage to a creep named Stanley Vance who has been declared dead after a long disappearance. Damon, a likable fellow despite drinking and treating his actress girlfriend Daphne (Mae Clarke, used to it no doubt), has come out of semi-retirement to help promote the play, while producer Ben Weston (Ricardo Cortez) hopes that success will cement his romance with Jessica. Everything seems to be shaping up nicely (except maybe for Daphne) when Vance (Louis Calhern) abruptly reappears, having disappeared only to prison under an alias. He wants in on the anticipated hit of The Dark Tower and reasserts his control over Jessica as leverage over Weston.

The character of Vance as interpreted by Calhern is the most interesting part of the story. As for the actor, here Calhern is like a prophecy of Vincent Price; he has the younger man's height and many of the physical and vocal mannerisms Price would acquire. I don't know if Price ever cited Calhern as an influence, but perhaps he should have. As for the character, Stanley Vance emerges as another manifestation of the popular Svengali archetype of the period, alongside Bela Lugosi's Dracula and, of course, John Barrymore's Svengali. At least that's how I read the character -- only, the nature of his mesmeric power, and its origins, are damned unclear. We never see him do anything to Jessica except give her orders. We never get a close-up of his mesmeric gaze, and Calhern, for all his eccentricities, has none of the burning intensity that Lugosi and Barrymore brought to their roles. Yet he clearly has a power like theirs, because in his presence Jessica becomes like a thrall, a Trilby, a zombie -- though, unlike Svengali, Vance's power dampens rather than enhances her talents. Where does this power come from? The film's refusal to explain leads one to infer that it's sexual at root. Yet I've read online a Time Magazine review of The Dark Tower from 1933 in which Stanley Vance is described as a "homosexual masochist." You could have fooled me from the evidence on screen in The Man With Two Faces, but that tidbit forces us in another direction, to conclude that Vance's power over Jessica is a matter of pure domination, of brainwashing before the word was coined. Time says that Vance broke Jessica's spirit, and my friend Wendigo (who watched this with me) said it could be just that simple; Vance broke her simply by taking over her life and giving her orders all the time. But an explanation that simple doesn't take into account what happens later.

In the play, Kaufman and Woollcott teased the audience by introducing a new character, Jules Chautard, who claims to be a fan of Jessica Wells and wants to buy shares in The Dark Tower. As Time explains, the Broadway producers went so far as to credit the role of Chautard to an entirely fictional actor, to save for later the surprise when Chautard, having killed Vance, removes his makeup. Warner Bros. was absolutely uninterested in such a tease. In every way from changing the title of The Dark Tower to The Man With Two Faces to announcing Robinson in "his two greatest roles" the studio wanted everyone to understand beforehand that the actor was going to show off his skills in a double role. The Man With Two Faces is less a mystery than a star turn for Robinson, of which he makes the most, though without going over the top in Master Thespian fashion. In fact, everyone in this ensemble cast is quite good, blessed presumably with plenty of grand dialogue from the original play. In any event, in the film the real suspense isn't about Chautard's real identity but about whether Damon Wells will get away with the crime, especially given that the more anyone learns about Stanley Vance, including police investigators, the more they appreciate his demise.

About that. Before Chautard kills him (first with poison, then by stabbing), Vance sends Jessica away from the hotel in a cab. When Vance succumbs to the poison, Chautard drags him into a closet, presumably to peform the coup de grace. Mayo cuts to Jessica in the cab. We see a sudden change of expression on her face, a relaxation and awakening at once. We know from this that Vance has been killed, but why do we know that? On the model of Svengali and Trilby, I suppose, people (writers, at least) in the Thirties presumed that a mesmerist maintained control over his victim by some sort of psychic bond that death would obviously sever. Of course, many viewers would be reminded less readily of Svengali and Trilby and more of Dracula and Mina and her very similar reawakening after Van Helsing destroys the vampire. Did Stanley Vance have a supernatural power over Jessica? Could he fairly be called a "psychic vampire?" Mesmerism in the collective imagination of the time probably straddled a flimsy borderline separating superstition from pseudoscience. At the same time, Hollywood was still only fitfully assimilating the "reality" of the supernatural into movies in these years. Vance's vague power seems out of place in this sort of story, but phenomena like that hadn't yet been segregated into a "genre" category. Whether Hollywood actually enhanced this aspect of the story will stay unclear until I decide to track down The Dark Tower and read it. But it's a wild enough element to arguably make The Man With Two Faces eligible for inclusion in the genre canon of Thirties cinema, and worthy of recommendation here. Those Archive discs aren't the cheapest, though, so ask your local library to keep up with the times.

Here's the trailer from TCM:

Posted by Samuel Wilson at 9:27 PM