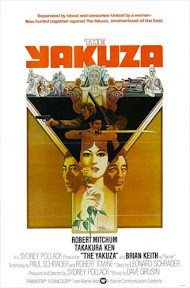 This extraordinary collaboration between Warner Bros. and Toei, Warner's Japanese counterpart as its country's definitive producer of gangster films, is less a merger of the two studios' distinctive approaches to organized crime than a blend of Toei's more romanticized yakuza-film tradition with American film noir, embodied authoritatively by Robert Mitchum. Directed by Sydney Pollack from a screenplay by the Schrader brothers and Robert Towne, The Yakuza follows Harry Kilmer to Japan, where he'd served in the postwar occupation force and fell in love with Eiko (Keiko Kishi). Harry wanted to marry her, but her brother Ken's return from the Philippines five years after the war ended put the kibosh on that idea. Now an old pal (Brian Keith) sends him back to Japan to rescue his daughter, who's been kidnapped by a yakuza gang, and Harry needs Ken's help. The resentment is mutual between these two, though understated, but Ken believes himself indebted to Harry for the American's protection of Eiko. Though he quit the yakuza himself some time ago, Ken considers himself bound by the principle of giri to help Harry. Together they rescue the American girl, but by killing two goons in the process Ken's life is forfeit to the kidnappers' gang. Worse, both Ken and Harry now know too much about the Keith character's shady business dealings with the Japanese, so Harry's life is forfeit, too. But not if either of our heroes can help it. Helped by Dusty (Richard Jordan), a Keith man sent to keep an eye on Harry who turns under the influence of Ken's code of honor (and a crush on Eiko's daughter), Harry and Ken take the battle to their enemies, but still have their own old conflict to resolve, once Harry learns its true nature....

The melodramatic nature of the romance of Harry and Eiko and the rivalry of Harry and Ken takes The Yakuza away from the hard-boiled bluntness of Kinji Fukasaku's movies, the representations of yakuza cinema with which I'm most familiar. A Fukasaku fan would probably also scoff at this film's idealization of Ken as a sincere, resolute devotee of giri. But the quasi-triangle adds an American noirish flavor to the proceedings, as the difficulty of Harry's romance with Eiko, which he blames on Ken's bigotry or domineering nature escalates into impossibility as he comes to understand Ken's actual position. One problem with the screenplay is that Harry has to be told the truth by an otherwise almost superfluous character instead of any of the actual interested parties. Maybe the writers thought that James Shigeta (who is, after all, an American) could be trusted with the burden of exposition more than the actual Japanese actors. In any event, it shows how the action and romance plots seem rather awkwardly patched together. 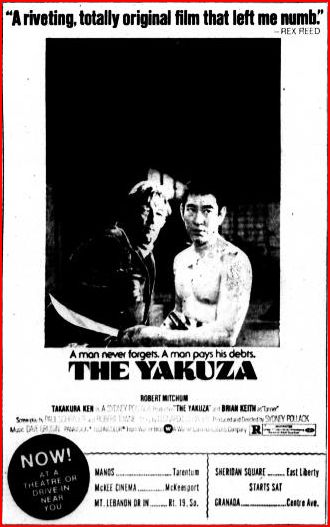 Fortunately, as an action film The Yakuza delivers the goods with some brutal gun and swordfight scenes. Among the highlights is Ken's slicing off a gunman's forearm; its finger spasmodically pulls the trigger while the severed limb flies through the air. Editing also accentuates the violence of moments without gore. When Mitchum empties a handgun into an enemy, Pollack makes a jump cut every time the actor fires to jolting effect. An attack by yakuza on the home of Harry's American friend, where Eiko, her daughter and Dusty are staying, is edited at a breakneck pace, while Harry and Ken's storming of their antagonist's headquarters is an extended climactic ordeal.

Robert Mitchum here sets a standard for action heroes aging ruggedly. He was 57 when he filmed this and looks it, but he could still pass for a plausible badass without juicing himself up into a freak like Sylvester Stallone. This film and The Friends of Eddie Coyle show that Mitchum still had it after thirty years of stardom. His co-star, Ken Takakura, is actually a little too young for his role. The actor was 14 when World War II ended, and I have a suspicion that the American producers probably wanted the more age-appropriate Toshiro Mifune for the part. I haven't seen any of Takakura's native yakuza films yet, but he impressed me in his second English-language film. His voice is accented enough for me to think it's his own, but he sounds fluent and his soft-spoken delivery gives him the advantage on more guttural Japanese actors who had a hard time making themselves understood in English. His role seems designed to be accessible to U.S. audiences: a lone-wolf rather than someone embedded in mysterious institutions. That alienation makes Ken a noir hero in his own right, albeit one who's set up for a happy ending if he takes Harry's advice.

The Yakuza is another offering from Vutopia, the newly-available on-demand movie service on my local cable system. Regrettably, the film was offered pan-and-scan; the fight scenes would certainly look even more impressive in a letterbox edition. I also learn from IMDB that the film was released in Japan a few months before opening in America, and in a slightly longer cut. That makes me wonder what a definitive version of The Yakuza would look like. I wonder because I'd like to see it someday.

There's no original-release trailer available online, but ssuto has crafted his own widescreen "trailer" incorporating some of the film's best action. Check it out below.

You clearly no nothing of the Yakuza-eiga. The Yakuza is a poor attempt as a film and especially as a yakuza film. It is simply paul scraders film comment artical in 1974 in film format in which is writes 18 most common scenes in a yakuza film. The 1970's saw Graveyard of Honor and battle without honor series, two films that are pushing the genre onwards. They reject tradition unlike the yakuza, a film which goes back to it. Bad movie, Bad review and it looks more like a crap 1960's ninkyo film. Watch Suzuki, Fukasaku and sonny cheba not bloody Pollack. Also try reading some papers on the matter, not sleeping under them.

I'm sorry once again, please don't ever review a Yakuza film again. I feel angry and disappointed in humanity when a man can look at arguably the worst film from a genre and claim it is anything but crap. The Yakuza genre is an example of a country clinging onto tradition as it slowly become more and more westernized. The 1970's reflected the end of the battle as the Yakuza except the westernization around them. A film created by Pollock represents nothing. A western made yakuza film is like an Irish man creating a gangster movie ("get rich or die trying" im refering to) but even worse. The genre is so important, you have no idea especially to a country that has resisted tradition for thousands of years, no other genre reflects this battle with a countries westernization, we lost the battle, Japan or still fighting, beat takeshi and takashi Miike are examples of this fight. A genre that has a nihilistic hero must be treated with respect.

Patrick, if you read my review thoroughly you'd see that I pointed out how The Yakuza falls short of the standards set by Fukasaku. If you click on the yakuza link tag you'll see my own comments on Yakuza Graveyard and Cops vs Thugs. Those should give you an idea of the regard in which I hold that director. You seem to be unhappy that I choose not to hate Schrader and Pollack's film. I hate to disappoint you, but I feel no obligation to condemn the picture because the creators chose not to imitate Fukasaku or Suzuki. The Yakuza isn't the equal of their films but in my opinion it's a successful action film on its own terms.

Another very good Americanized 'yakuza' flick was John Frankenheimer's "The Challenge". Hard to find a copy, but well worth it.