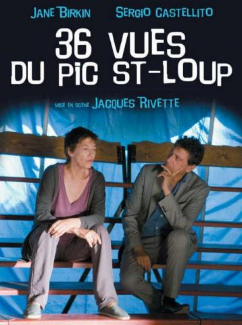 After more than fifty years, the surviving directors of the French New Wave are the elder statesmen of global cinema. Their ranks have been thinning gradually -- Eric Rohmer and Claude Chabrol died last year -- but recent years have also seen a spate of activity from the old gang, including this latest film from Jacques Rivette. Known for making films of extraordinary length, Rivette got 36 vues du Pic St-Loup in under 90 minutes, and that's really about all the story needs. It's a familiar, archetypal sort of story about a man who runs away to join the circus. More accurately, Vittorio (Sergio Castellitto) stops in the middle of a journey to join a circus. He's followed Kate (Jane Birkin) there after helping repair her car on the road, and his vague interest in her becomes an obsession with the circus to which she once belonged and has returned. Something about circus life fascinates him beyond reason; he laughs like a rube at an unenthusiastically performed clown skit, yet also seeks to advise the head clown on how to improve the act. He becomes a bystander in the standard personal dramas of circus life and is accepted as part of the landscape if not part of the extended circus family until he is recruited to perform in the very routine that first captivated him. 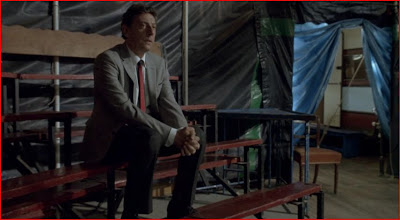 While the Nouveau Vague is probably ancient history for many movie fans today, Rivette's film reminded me of even more ancient history. Around a Small Mountain is reminiscent of Charlie Chaplin's The Circus in its attempt to find a kind of humor in the protagonist's failure to be funny in a conventional way. That is, Chaplin's tramp tries to do things funny in the circus way but fails, yet becomes a star accidentally by just happening to stumble into the center ring in a funny way. In Rivette's film, Vittorio thinks the lame clown routine (one cajoles another into trying to catch a bullet with his teeth) is hilarious, and thinks he could make it even more funny. But when the opportunity is thrust upon him to perform the skit, he forgets the lines, tries desperately to improvise (as the lead clown heroically tries to keep up) and finally rampages around the stage waving a (loaded?) gun as the lead clown tries to talk him down. This isn't necessarily funny (I found it so) but the point seems to be that here, on the stage, Vittorio finally has to work out some of the issues that have kept him here rather than finishing his journey. Rivette seems to be saying something about performance as a form of intimate expression. He says it most blatantly in a scene near the end in which Vittorio and some circus folk have what sounds like an ordinary chat. But instead of filming the dialogue in one shot, or cutting from Vittorio to the circus folk, Rivette has each character walk out of a tent to perform his or her line, exit stage left or right to make room for the next actor, then go through the tent again to do the next line. Again, the idea may be that everyday life for everyone is a kind of performance, an idea echoed in Kate's storyline, in which her return to performing is a quest for redemption or closure following a fatal accident in her past. 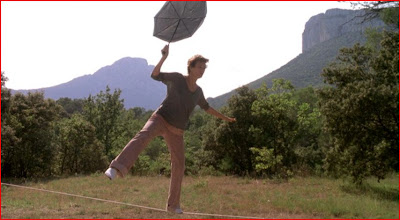 Rivette tells his little story in a potentially alienating way. His circus is not about entertainment in any recognizable way. It's either too poor to afford musical accompaniment or else including music didn't occur to or interest him -- or else that's just how the smaller European circuses work. But it makes the routines look particularly lifeless, as does the lack of audience response, though that does serve to highlight Vittorio's exceptional response to the clown skit. This also reminded me of Chaplin and his failure to include a laugh track for his vaudeville routines in Limelight. The reason then was that he expected the actual movie audience to do the laughing, while for Rivette, I suspect, the main idea is that audience response matters less than whatever the circus performers get out of performing for themselves. 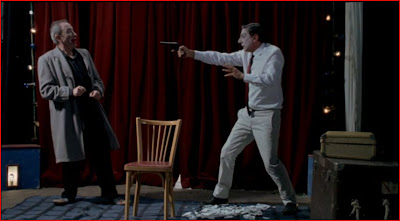 However you interpret it, the story's a trifle, but it is a pretty one. Sergio Castellitto is an increasingly familiar face around the wild world of cinema, having turned up even in a Narnia movie, and so far I've liked him whenever I've seen him. He keeps this film watchable even if Vittorio's character arc proves inscrutable. I've only seen one other Rivette movie and assume that this one's far from his best work. But I found it a work of strong artistic personality, however vague or abstract he gets, and it leaves me still willing to discover more of his work.
Posted by Samuel Wilson at 7:19 PM