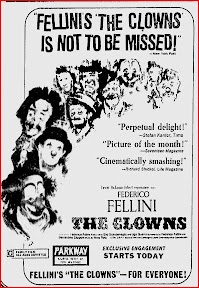 Why "clowns?" Why did Federico Fellini call his made-for-TV essay film I Clowns in Italian? It's not as if Italian doesn't have a word for the vocation, but it eventually sunk in to my initially obtuse skull that had he called the movie I Pagliacci, both Italian and English speaking audiences would have gone in expecting a very different movie. With the title accounted for, that leaves us the film itself to ponder. I Clowns comes from a period when Fellini seemed to be adapting the devices of Italian mondo movies to his particular sensibility. Working for television with a documentary mandate apparently sparked a creative process beginning with his American TV special, Fellini: A Director's Notebook, which he made while transitioning from an aborted sci-fi film to his Roman spectacle Satyricon. With Satyricon done, he returned to essay mode for Clowns, Roma and Amarcord. By the end, he'd personalized the format enough to dispense with any pretense of documentation, and what sets his work apart from mondo in general is the understanding that Fellini will show us re-enactments of actuality without pretending to show us "reality." Mondo pioneers Giacopetti & Prosperi were headed in the same direction with Goodbye Uncle Tom, but even then, while recreating the distant past, there was a pretense of objectivity, an implicit claim to show things as they were, that Fellini doesn't really require us to accept. Clowns actually invites us to call every documentary pretense into question. The director shows himself directing the film and has his assistant Maya Morin read much of the narration on screen, as if we were seeing "The Making of I Clowns" rather than the thing itself. The tactic also creates the impression that everything we see, and not just the obvious re-creations, could be scripted rather than spontaneous. Anita Ekberg's allegedly accidental appearance (she's supposedly shopping for a panther)only adds to that impression. 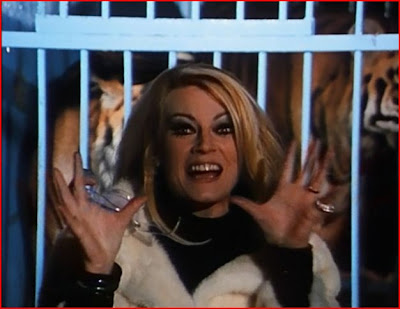 Fellini admits to being fascinated by grotesque freaks throughout his life. How do you feel about that, Anita?

Fellini also plays with the question of whether cinema can capture or preserve reality. In two different scenes, he makes an appointment to see rare film footage of famous clowns. The first time, at the home of a collector, the old film breaks and ignites in the projector. The second time, at a Paris archive, Fellini has a hard time determining whether the clip shows the clown he's looking for, and in any event the footage is much too short to make any impression. The director's disappointments seem linked to his implicit thesis about the incompatibility of cinema and classical clowning. The film opens with a surprising confession: the young Fellini (so the older man claims) was, if not frightened, then strongly disturbed by clowns when he first attended a circus. They reminded him too strongly, he recounts, of the disturbed or merely grotesque people he saw everyday in the real world. Those people, to a great extent, became the subject of Fellini's cinema, which evolved into an often literally circus-like spectacle of eccentricity. When the RAI TV project (originally broadcast in black-and-white on Christmas Day 1970 and subsequently released to theaters in color) gave Fellini the opportunity to film a literal circus, the result is problematic. 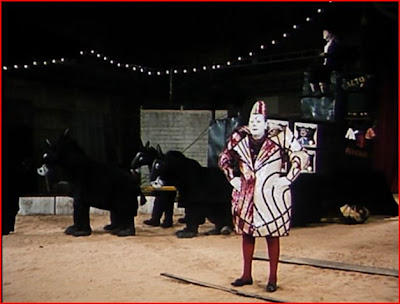 Circus clowning is arguably uncinematic when it involves bunches of clowns doing their shtick simultaneously while playing to different sections of the audience in different directions. The individual performance style is also uncinematic, as studios learned when they recruited circus clowns for silent comedies. Fellini can show us presumably acclaimed clowns doing their stuff, but as long as he sticks to documentary mode much of it leaves a moviegoer feeling underwhelmed. Things change when the director stages a center-ring funeral for "Augusto," one of the archetypal clown characters, for his climax. This is a true Fellini-esque spectacle, but the director portrays himself taking things too far. He wants to close it with the big Fellini finish, with clowns parading around the ring, but he makes the veteran clowns hustle around and around repeatedly, faster and faster each time, as if he were shooting They Shoot Clowns, Don't They? Many of the clowns simply can't keep up and have to step out of the ring to recuperate. While clearly sending up his own reputation for excess, Fellini also seems to answer his film's question, "Where are the old clowns?" by showing us symbolically that cinema did them in. While the film actually closes with a sentimental horn duet for two clowns in an empty ring, the climax that comes before gives the more modest scene the air of a requiem. 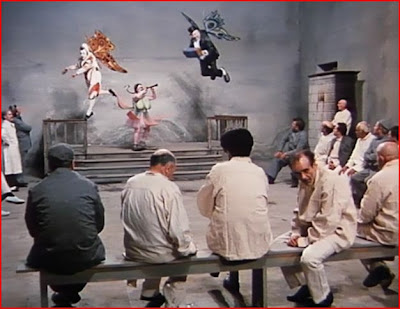 Like many a mondo, I Clowns is a hit-or-miss project. Most of the film lacks the creative engagement Fellini brings to the funeral scene, and while many individual scenes are beautifully done (particularly the Fratelli brothers' tense performance on wires in an insane asylum) many are also empty spectacles that exist only for illustration. As someone who knew next to nothing about clown history, I found the discussions of augustos and white clowns fascinating, but Fellini's presentation only whetted my appetite for more detailed accounts of famous personalities like the Fratellis than his format allowed. The film's limitations show Fellini grappling with a new mode of moviemaking that will bear fruit in the much superior Roma and Amarcord. Clowns itself remains a historically important film as an episode in the director's creative evolution, with one brilliant sequence to redeem it for movie fans in general. 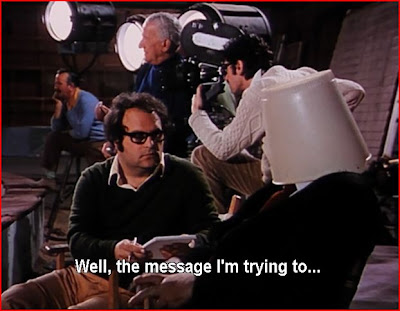 I don't know if this is an authentic theatrical trailer, but rarovideousa has posted it to YouTube to promote last month's U.S. DVD premiere of the movie.

Posted by Samuel Wilson at 3:13 PM