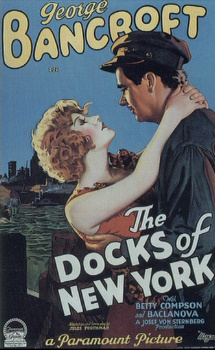 We think of the 1970s as a unique period when actors could become stars and even leading men without conventional good looks. But when you consider George Bancroft's rise to stardom in the 1920s the Seventies don't seem quite as unique. Bancroft was a beefy lout who got his big break past the age of forty; think of a Wallace Beery, if you know your classic Hollywood, with perhaps more sex appeal. Bancroft owes his place in movie history to Josef von Sternberg, who cast him as Bull Weed in the proto-gangster film Underworld. Star and director teamed up again a year later for a film that even more strongly anticipates the visual style of film noir, but in the service of a virtual fairy-tale romance of the waterfront, with Bancroft as the leading man. He plays Bill Roberts, a stoker eager for a night on the town when his ship pulls into port. He gets grief beforehand from his supervisor Andy (Mitchell Lewis), who orders him and his pal to clean up their filthy work area (they shovel coal into furnaces) before going ashore, and warns Bill that he'll lose his job if he comes back drunk. The work delays Bill long enough that he reaches the pier just as someone leaps off into the water. This suicide attempt is a bravura bit of pictorial business by Sternberg. We see the woman's reflection in the still moonlit water as she stands at the edge of the pier. We see the reflection leap and disappear from view. Moments later, the surface is dappled with little splashes, then overrun with ripples from the woman hitting the water. 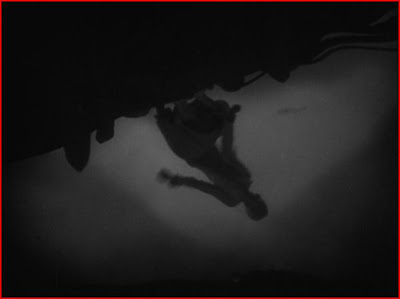 Bill dives in and rescues the girl. He totes her to the nearest dive to put her to bed and hopefully get her a change of clothes. The dive's proprietors don't want her around, but Bill forces his will on them. The girl, Mae (Betty Compson) seems to have but one friend, Lou (Olga Baclanova, of Freaks fame), though we'll see that their relationship carries a strange charge. Lou also happens to be Andy's wife, and he'd returned a while earlier to find her in the arms of another man. She resignedly reunites with Andy and keeps uneasy company with him until Bill brings a dried-off and redressed Mae downstairs. She seems too beautiful to be at the end of her rope, but her sense of alienation is palpable. She stoically puffs away at cigarettes and acts like a bemused bystander of her own story until she agrees to let Bill try to show her a good time. 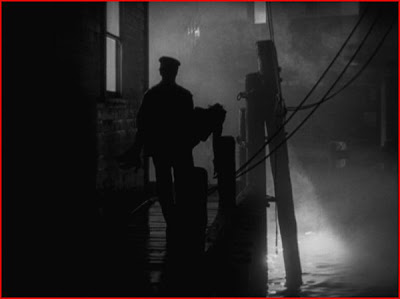 George Bancroft falls, or rather, dives for Betty Compson in Docks of New York. 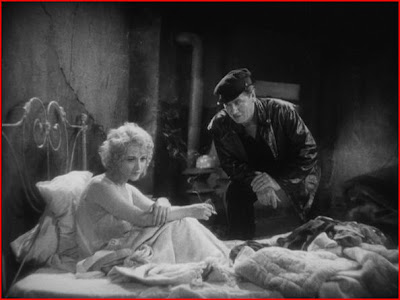 There ensues a multifaceted flirtation as Bill tries to entertain Mae while Andy keeps a lustful gaze on the troubled girl, and Lou's fiercer gaze sweeps across the entire barroom, occasionally settling intensely on Mae. The inevitable happens and Bill decks Andy, after which the festivities really begin. Some sort of sense of propriety or necessity makes Bill think it necessary to marry Mae before he can score with her, and Lou eggs the couple on. Still bemused but increasingly sincerely moved by Bill's ardor, Mae accepts his proposal and Lou summons Hymn-Book Harry, the local missionary. The wedding is parody and pathos in one. On one level Lou treats it as one big joke, yet some more intense feeling drives her to organize the spectacle. Add to that the pathos of Harry himself. He's played by Gustav von Seyffertitz, the Peter Stormare of his time and by virtue of his name alone one of my favorite silent character actors. He usually played creeps, and kept at it in sound thanks to his creepy German accent. Hymn-Book Harry is a weary, bitter figure with no illusions about the people he ministers to, but he retains a vestige of respect for the ritual and institution of marriage. He's about to walk away from the mockery Lou is arranging, but when he sees another woman take his place and propose a set of parody vows, he resumes his station to conduct the ceremony, despite Bill's lack of a license or a ring. Harry accepts his promise to get a license in the morning, while Lou gives Mae her own wedding ring with the wish that it'll do Mae more good than it did her. Throughout, Sternberg, who was good with faces, gets a wonderfully nuanced performance from Seyffertitz, whose brief presence enriches the film immensely. At the same time, Baclanova (whose sound career would also be constrained by a foreign accent) brings Lou's conflicted feelings to the surface. While the female tavern patrons converge on Mae to plant affectionate pecks on her cheeks, Lou confronts her and kisses her full on the mouth. 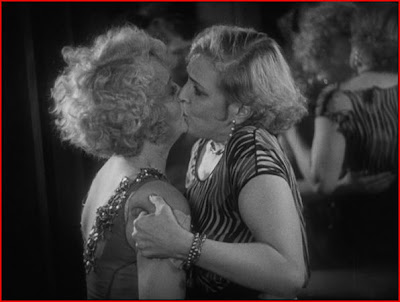 A few years later, Sternberg would earn eternal notoriety for having Marlene Dietrich kiss a woman in Morocco, but Docks shows that he was just repeating himself. If anything, the silent film has more lesbian subtext, thanks to Baclanova's intense performance -- but then again, I may be reading more into it than Sternberg meant to imply. Anyway, the couple retire to the bridal bed...and in the morning Bill throws a few bills on Mae's nightstand and heads downstairs to breakfast before going back to his ship. Andy hasn't forgotten last night, however -- though he thinks Bill might have -- and he fires the stoker on the spot. Bill isn't fazed; he figures he can find work anywhere, so off he goes. Seeing him go, Andy figures that now's his chance with Mae. He heads upstairs to tell the girl that Bill has abandoned her. Before long, Lou follows him upstairs. Then we see the seagulls that had been perching outside Mae's window startle and fly away, which is Sternberg's way of telling us that something terrible has happened in the room. Bill's on his way to the pier when he sees cops and crowds converging on the tavern and Mae's room. Curiosity and anxiety overcome him and he goes back to learn what happened, explaining to the officers that he's the woman's wife. Inside, Andy is dead, and Lou admits to shooting him. She gives Mae one last intense glance as she steps into the paddy wagon and wishes her luck. 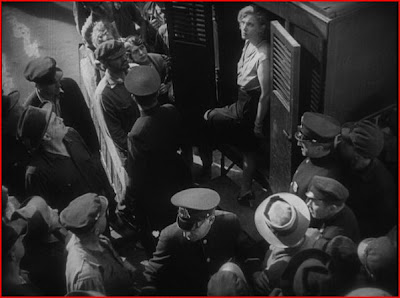 It's Bill's lucky day, at least. If Andy's dead, that means he isn't fired. But somehow he feels uneasy about leaving Mae behind. Couldn't he settle down, at least for a while, and find a job on land? Not with his old sidekick from the ship urging him to get on board before it sails, apparently. But it does seem to weigh on the stoker that he might be the only thing keeping Mae from throwing herself back in the drink. And Sternberg lets us know that the water's on her mind after Bill leaves. It's not until the ship is on the way that Bill has second thoughts about sailing, but what can he do about it then? And what might he find if he can somehow get back to land under his own power?... Somehow, it works. The actors put it over with expressive but not excessive pantomime. Bancroft always keeps just short of over the top; he might not have managed such modulation in sound. Compson and Baclanova are excellent. Their tawdry environment is a creation of Sternberg, art director Hans Dreier and cinematographer Harold Rosson. Their work is phenomenal, practically the final word on what silent film could do with shadows and light. Docks is one of the most starkly attractive and atmospheric black-and-white films you'll ever see. Whether you buy the story or not, you'll believe the images and the faces they highlight. As it is, the story might end up too romantic, but it doesn't have as corny a wrap-up as Underworld and the romance never undermines the essential seediness of the setting. Pathos, usually the highest aspiration of silent cinema, seemed to require that sort of seediness, and Docks succeeds memorably in making it the true stuff of romance and monochrome art.
Posted by Samuel Wilson at 9:36 PM

You know...I have always said that I have seen black and white films that were more colorful than modern day films...

And this is one of them.

Along with "The Magnificent Ambersons" and "Out of the Past," "The Docks of New York" probably is the most "colorful" black and white film ever made.

Nathanael, I'll go along with that in any sense of "color" you want. Docks is derinitely a visual treat for anyone who'll give black and white a chance.

Spot on excellent review of a beautiful and powerful film. betty compson is for the ages.