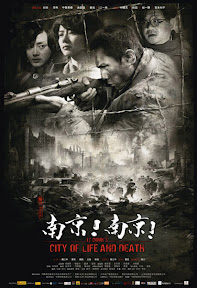 The "Rape of Nanking" has been a hot topic in Chinese cinema lately. China's official nominee for the Best Foreign-Language Film Oscar this year is Zhang Yimou's Flowers of War, a high-profile international project thanks to the participation of Christian Bale. The presence of helpful Europeans (even Nazis) in the ravaged city has made the Massacre a popular subject worldwide. The German businessman John Rabe, the equivalent for China of a righteous gentile and a minor but important character in Lu Chuan's epic, was the subject of an entire Sino-German film in his own right a few years before Nanjing! Nanjing! appeared. The Massacre has the same appeal for Chinese, apparently, that the Holocaust has for Europeans and Americans, and its recent popularity as a cinematic subject may well reflect a little "Holocaust envy," that supposed feeling of jealousy toward Jews over their having suffered the worst thing that could possibly happen to a people. It's more likely, though, that the Chinese suffer from Holocaust Movie Envy, given how City of Life and Death is visually imitative of Steven Spielberg's Schindler's List -- with a little Pvt. Ryan ultraviolence thrown in. On the other hand, filming the Nanking story in black and white makes sense, since it reproduces the immediacy of newsreels. Anyway, it's not the first Chinese film in recent times to take the monochrome approach; the more controversial Devils on the Doorstep did the same thing. Moreover, Lu Chuan's first object may not have been so much to imitate Spielberg but to answer a more recent, nearly monochrome film: Clint Eastwood's paean to the valiant Japanese, Letters From Iwo Jima. Nothing gets a Chinese riled up, I suspect, as a sympathetic account of Japan's war, and the recent spate of Nanking movies may be meant as a reminder to the moviegoing world of why Japan deserved everything it got by war's end. Chinese cinema has been unforgiving toward Japan for generations, from the stock Jap villains of kung fu films to the atrocity porn of films like Men Behind the Sun. Nanjing! Nanjing! takes the trouble to give us a "good Japanese," but he appears so exceptional that he does little to humanize the enemy in general; if anything, his example damns the majority further -- and that may be the point.

Kadokawa (Hideo Nakaizumi) is one of a number of characters, mostly Chinese of course, followed by Lu as the Japanese tighten their grip on the erstwhile capital city in 1937. We also encounter a plucky (not to mention lucky) Chinese child soldier and some members of John Rabe's Nanking staff, among others. I found Kadokawa the most compelling character simply because he wasn't just an archetype of resistance or suffering. He's not the first cinematic soldier to seem too sensitive for his job, but you can hardly blame him for his reactions -- you can blame his buddies for their complacency, their casual viciousness, their treating it all as a lark once the last patches of resistance are wiped out. By comparison, Kadokawa seemingly can't help forming personal bonds with people, especially the unfortunates, Japanese and Chinese alike, recruited or impressed into being "comfort women." A curious effect of this film is that, for all the wartime violence, which is, after all, the sort of stuff we've all seen before, what horrifies the most, more than the explosions, the hangings and the severed heads, is the treatment of the female victims. What the Nazis did for mass murder, it seems, the Japanese did for mass rape -- not so much industrializing it as systematizing it. Rape trails war everywhere, but the Japanese in World War II seem unique in apparently asserting their soldiers' entitlement to sex. Rape may have happened on a comparable scale as the Soviets drove through Germany, but we don't get the same impression of perverse order portrayed here, where the Japanese occupiers can flatly demand that the Chinese deliver up a quota of women for "comfort." The most profound moment of pathos in the picture is when, one by one, women raise their hands to volunteer so that the rest of the captive community will at least be promised food and supplies for the winter. Kadokawa encounters one of these women and, as usual, makes an attempt to be a gentleman. As usual, it's in vain. These women's experience is summed up when their naked bodies are dumped into a big wheelbarrow and hauled away by swastika-wearing flunkies. Never did the Japanese seem fitter allies for the Nazis.

Since resistance by the Chinese seemed futile at an early point, I spent the film waiting for Kadokawa to snap or rebel. The moment finally comes when it can help the child soldier and another of the main characters, and it's thankfully not overstated. It's more of a simple refusal followed by a more profound refusal. The effect remains contradictory; if Kadokawa is meant to give the Japanese a human face, the failure of the rest to emulate him, one way or the other, arguably dehumanizes them even further. But you can probably excuse a Chinese filmmaker for drawing that conclusion, history being what it is. People like Kadokawa will probably be exceptional in an army, however Chinese (or Americans, for that matter) might want to flatter themselves otherwise. That point easily gets lost in an atrocity film, the point of which is to highlight one nation's crime against another. City of Life and Death really hasn't much story to tell apart from the atrocity. Some characters survive, some don't; hence the American title. Kadokawa goes a long way toward breaking up the monotony, but viewers may find the film hard to get through just the same.

This is a stark triumph of production design and black and white cinematography, and Lu Chuan shows some mastery of widescreen composition in just his third feature. Nanjing! Nanjing! is definitely an eye-opening film for people unfamiliar with the Chinese theater of World War II and one of its vilest episodes, but it may make you avert your eyes as well. In any event, it sets a formidable standard for Flowers of War to match, and proves another compelling chapter in the global revival of World War II cinema.
Posted by Samuel Wilson at 8:55 PM

The film is stark and uncompromising for sure, and I agree that the showing of teh attrocities is fully the intent, instead of going with a more structured narrative. It's grim stuff, but experty made with superb wide screen framing and composition.

In a surprise announcement this afternoon, the Los Angeles Film Critics Association named this the best foreign language film of the year.

Sam, there's always a place for testament-type films like this one, but it's hard to say what would make for a definitive film about Nanking or the Sino-Japanese war in general. Interesting news from L.A. Did they get to see the Zhang Yimou film? I'd imagine the Chinese would prefer that the latter be recognized this year, but such are the vagaries of film distribution.