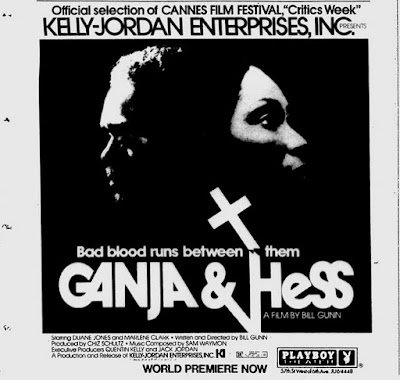 My friend Wendigo is a vampire-movie fan but not necessarily a cult-movie fan. When I mentioned that Bill Gunn's notorious (and in some quarters admired) black vampire film was being shown on TCM last weekend, he confessed that he had never heard of it. Obviously a DVR appointment was in order, since for all that I'd heard of it, I hadn't seen it either. Except for seeing it on TV instead of in a theater, this would be an optimum presentation: letterboxed and uncut -- including full frontal male nudity for the finale. We could obviously have done worse. After its failed New York premiere (which followed a triumphant world premiere at Cannes), Ganja and Hess was cut down drastically, retitled several times over and marketed for exploitation. Now, however, there would be no excuses if the film failed to impress us.

From the beginning, apparently, audiences have had a hard time following Gunn's story. He had to write an angry letter to the New York Times correcting the reviewer on a fairly important plot point, and to this day the synopsis on Wikipedia doesn't quite jibe with what we saw. This is odd, since the movie spells things out pretty bluntly, and twice over at that. A set of title cards relate that Dr. Hess Green (Duane "Night of the Living Dead" Jones) has become an immortal blood drinker after being stabbed with a ritual knife from the legendary African kingdom of Myrthia. The fact of Hess's blood addiction is restated in the narration of a gospel preacher who doubles as Dr. Green's chauffeur. But some people clearly believe that what follows, the first act of the film, flashes back to how Green became a blood addict, though nothing that we can recall actually identifies the sequence as a flashback. What we saw showed Green's awkward interaction with his new assistant, George Meda (Gunn). Meda is suicidal; Green has to talk him out of a tree in one scene as a noose hangs prominently from a branch. Suicidal thoughts become homicidal as Meda does stab Green with the famous knife, but the doctor pops back up promptly. Finally, Meda shoots himself. As a puddle of blood forms beneath him, Hess hits the floor to lap up the stuff in a matter-of-fact manner. If this is his first vampiric act, he give no indication that he finds it unusual or disturbing.

Enter Mrs. Ganja Meda (Marlene Clark), who makes a dismal first impression on viewers by insulting Green's long-suffering butler and not seeming overly impatient about her husband's return from wherever he went. Where he went, she finally learns, was to Green's wine cellar freezer. By this point, Hess has already started putting the moves on the unwitting widow -- though he restricts his blood drinking to strangers whenever he hears the ancient Myrthian chanting on the soundtrack. Her shocking discovery only accelerates things. Soon enough Ganja becomes Mrs. Hess Green, and a blood drinker, thanks to Hess's work with the Myrthian knife.  It's your standard romantic-vampire eternal-love fantasy, except it doesn't last. Hess gives Ganja a boy toy to play with, but seems to lose interest in the lifestyle -- if you can call it that. He ponders over Myrthian and Christian lore in search of the secret of self-destruction and seeks the reverend chauffeur's blessing, more or less, in church. Having offered Ganja eternal life, Hess now invites her to join him in death -- whether as an ultimate proof of love or as a moral imperative, but Ganja isn't so sure.... 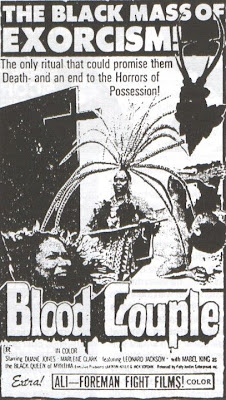 Putting it mildly, Wendigo calls Ganja and Hess "a strange movie." He appreciates what Gunn wanted to do and admires his ambition, but he suspects that the director got caught up in an art-for-art's sake approach that didn't do justice to his story. His various cinematic tricks only made the story difficult to warm to, and his lack of real visual style makes many scenes just plain dull. Gunn is a better writer than he is a director, and his actors are clearly talented -- anyone who's ever seen Night of the Living Dead would regret how few opportunities Duane Jones got, and Wendigo remembers Marlene Clark fondly from The Beast Must Die -- but Gunn the director leaves his cast and his own script at sea. He's really not very good at composing images, however fond he is of symbolism and decorating his sets with masterworks of art. A few scenes are nicely staged, like the suicide tree dialogue, and the closing shot of a naked running man has some real power, but too often the frame seems lifeless despite the actors' best efforts. Some aspects of the film are almost inscrutable. For instance, Wendigo has no idea where the film was supposed to be taking place. Everything seems American -- especially the church scenes -- but then you hear an obviously European siren all of a sudden. Was that just some avant-garde trick or joke? That would fit Gunn's sense of his own place in world cinema. Sadly, he had a higher opinion of his craft than the film justifies; he complained to the Times that he would have been hailed as a master had he been white and European -- but had that been the case he might only have been Jess Franco. That's not necessarily a bad thing, but it probably wouldn't guarantee you a good review in the New York Times. As a script, Ganja and Hess offered Wendigo more to praise. As always, he likes alternative visions of the vampire, and he likes that Gunn got through the film without ever calling Hess or Ganja a vampire. Since folklore gives us countless ways in which people can become vampires, Wendigo has no problem at all with the Myrthian knife backstory -- if anything, he would have liked more of that background. Speaking for myself, I'll throw in my admiration for Gunn's deromanticized approach to the vampire-seduction archetype and his denial of solace through love for his accursed protagonist. Overall, however, this vaunted artifact of Seventies cinema reminded us both to a distressing extent of Vampire's Call, the Nigerian vampire tale we reviewed a few weeks back. That was another case, albeit more extreme, of talent falling short of ambitious vision. Bill Gunn was clearly more ambitious, or at least more pretentious, than his Nigerian counterpart, but ambition, however impressive, doesn't translate automatically to realization. Ganja and Hess has to be judged by execution, not intention, and Wendigo has to judge it a failure as a film. At its worst, it struck him less as a feast for the eye than an icepick aimed at it. That may be too harsh, but on the other hand, the film has probably been given too much credit for intentions over time. If the idea of a good movie is enough for you, Wendigo might recommend Ganja and Hess to you.
Posted by Samuel Wilson at 10:38 PM

I'm not sure where and if it fits in, but "ganja" is also a slang word for marijuana. . .

Needless to say, you're not the first person to note this, and vampirism has been a metaphor for drug addiction for some time. It does surprise us, however, that this is the first comment on a film we thought was a lot more beloved. Any defense of the film will actually be more than welcome here.

This is fantastic and well written. A good read

Ganja & Hess soundtrack- 4/21/18 contact your local record store to make sure they stock this.
Strange Disc Records distributed by Light in the Attic Records.
Oh and “Blood Couple” is on a DVD compilation called “Creatures Critters and Crazies” this is from deleted scenes & it’s a totally different and amazing film.