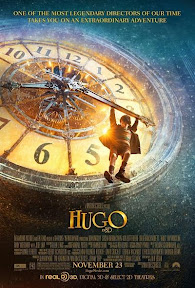 With an irony that will probably prove the project's undoing at the box office, Martin Scorsese has employed state-of-the-art cinema technology to celebrate the most primitive forms of special effects in his heartwarming infomercial for film preservation. Hugo is a film that will more likely find its audience on home video, as a TV perrennial or an oft-watched DVD. It's too intimate a children's film, if you even want to call it that, and too humanely paced to provide the constant spectacular agitation multiplex audiences seem to demand. Is it a children's film at all? I guess it is, since The Invention of Hugo Cabret is considered a children's or young-adult story. But where are all the one-liners, the insults, the slapstick, the potty humor, the pop-culture references? There are chase scenes and cliffhangers, but I wonder whether one guard chasing one boy on foot through a train station will stimulate young audiences as much as is usually thought necessary. In any event, Hugo is above categorization. Working in the classical style, Scorsese would not think of making a film only for children -- the little brats wouldn't get many of his homages anyway. I'm sure he'd like the kids to be dazzled by the magical cityscape of 1930s Paris, enthralled by the tunnels and clockwork of Hugo Cabret's world, fascinated by the pageantry of Georges Melies' pioneer moviemaking. But I have my doubts, which reflect more on American youth than on Martin Scorsese. He's made a charming, even heartwarming picture that pulses with his love for movie history, but in this latest autumn of Twilight that love will go mostly unrequited. But that only makes Hugo more poignant, since the tale of a movie artist losing his audience is the mystery and the heart of the show. The likely massive loss of money won't kill Scorsese's career, but the hunch that this film will flop only confirms its own message that such tragedies happen.

Hugo is a very old-fashioned tale of an orphan who maintains the clocks at a Paris train station in his uncle's absence while struggling to repair the title invention, a mechanical man his late father had been tinkering with before his death in a fire. Hugo's thefts of parts and tools from a bric-a-brac dealer with a shop at the station leads to his discovery of a closer connection between the dealer, "Papa Georges," and the mechanical man. He eventually learns that the old man is the long-forgotten, believed-dead Melies, the director of A Trip To the Moon and hundreds more fantasies of innovative trickery. The invention proves a McGuffin, as the real story becomes the effort to get the embittered old man to re-embrace his past and accept the collective embrace of early film buffs and historians -- to realize, one might say, that he had a wonderful life despite all his defeats.

So benign is Scorsese's vision this time that he gives us Christopher Lee as a perfectly benevolent bookseller -- and somehow I can imagine the great man hectoring the director about what Paris was really like back when he was a boy tourist -- Lee would have been close to Hugo's age at the time of the picture. Lee's presence at this late point in his career is always a plus, and here particularly his casting is yet another token of Scorsese's adoring cinemania. It's also typical of the peculiar casting and dialogue direction that renders Paris circa 1931 a colony of the British Empire. Even Sasha Baron Cohen, practically invited to turn his awkward security guard into a Clouseau homage, steers clear of anything resembling a French accent. His character takes us back to the good old tradition of comic bumbling cops, but Scorsese can't help humanizing him while milking his leg brace for politically-incorrect humor and ultimately redeeming him. Cohen's subplot is part of a not very convincing argument that World War I was to blame for Melies's decline as well as the guard's poor attitude and his obsession with catching orphans. This approach elevates Melies's rediscovery into a moment of national healing, represented by all our various eccentric characters partying together -- but the history of cinema argues against any claim that the Great War killed audiences' appetites for fantasy. The overstatement doesn't really hurt the film, however, since its real point is rediscovering a legacy that was lost, whatever the reason for the loss.

Along with Lee and Cohen, Ben Kingsley is predictably excellent as Papa Georges, and Asa Butterfield and Chloe Grace Moretz are very likable as the lead kids. Some of the character actors get relatively short shrift, as if Scorsese thought they'd keep our interest just by looking funny. The attention he pays to these characters without really giving them much to do slows and pads the film a bit, but the lesser characters are never on so long that they try our patience. Visually the production and cinematography are beautiful, but sometimes the 3-D only gets in the way. Scorsese puts the process through its paces and often achieves remarkable effects. But the stereoscape, as usual, eventually hits a CGI wall that flattens the illusion of reality. If Scorsese were still building massive sets like he did for Gangs of New York, or had been able to film on authentic locations, the 3-D would have been far more impressive. Instead, despite the tremendous efforts of Scorsese, Robert Richardson and Dante Ferretti, Paris still ends up looking like a video game sometimes, however attractive. That being said, Hugo is still easily one of the best 3-D movies of the current generation, and perhaps the best of them in pure movie terms. The more you like movies -- the more movies you like -- the more you'll like this one.
Posted by Samuel Wilson at 9:00 PM

You are a tough cookie when it comes to full acceptance, but this is also part of your discerning attention to the cinema, a sure asset.

I am not sure that this film will do poorly at the box office over teh long haul, and I'm also skeptical as to its prospects with the younger ones, if some experiences I've been told over the past week ring true.

From the dazzling opening, when the film pans to show a snowbound Paris to the zoom through two trains and onto the train center overhead clock and the boy's face behind it this was a marvelous and eeply affecting roller coaster ride, that for me is one of the year's three best films (with THE TREE OF LIFE and MELANCHOLIA) and a film that stands as loving a homage to silent cinema that has ever been forged. (Ironically another, THE ARTIST is also superlative) There's so much to praise here for sure, but I can appreciate the generally most favorable assesment you offer up here in this great piece. I assigned the book to a few classes last week, and have applied for a field trip to see the film. So far I've gotten excellent returns from students.

Good work, Samuel. I too felt a strange tension between the high-tech 3-D antics and the film's attempt to reinvigorate the love for old-school analog magic/movie gymcrackery. Like using an electric guitar to illustrate choral music - or dancing about architecture.

For what it's worth, I also wrote about the film's disconnected heart, here: http://mondo-cine.blogspot.com/2011/12/invention-of-hugo-cabret.html,

Keep up the good work!

Sam, the odds against Hugo making money are long. Its domestic gross after this weekend is estimated at $25 million, but the film is said to have cost $150 million. Let me make clear that it deserves better than to be remembered as a flop, but Scorsese made a potentially classic children's film without pandering to the presumed tastes of today's kids, and that will cost him in the short term.

Roger, the scenes in Melies's studio are some of my favorites in the picture. They justify Scorsese's paradoxical approach by showing us the "3-D" reality that went into Melies's legendary 2-d images. But this just isn't what people in 2011 expect of a 3-D film. Presumably they want more action and even more unreality. If Avatar is the template for a popular 3-D film then Hugo's cause is nearly hopeless from a commercial standpoint.