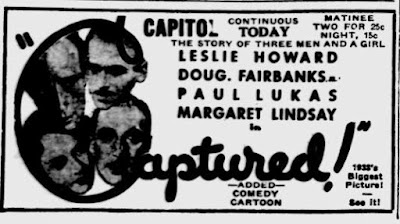 Roy Del Ruth's POW drama for Warner Bros. isn't the typical anti-war story you might expect in 1933, when cynicism about the last Great War was near its height. Nor is Captured! a pro-war film or patriotic in any way, since its heroes are British. If anything, Edward Chodorov's adaptation of a Philip Gibbs story suggests that the problem with war isn't war itself, but the warriors. War itself can be a very orderly, almost civilized affair, depending on who wages it. If you're a British POW like Capt. Allison (Leslie Howard), and your new camp commandant (Paul Lukas) just happens to be an Oxford man, confinement can be almost bearable. It wasn't at first. An impromptu escape attempt results in Allison's men being locked in a cellar for weeks. They nearly go stir crazy, growing impatient with each other's company -- the banter between a Texan and a Cockney is hard to bear -- before Allison prevails upon the new commandant's regard for humanity and makes himself responsible for the men's conduct.  Of course, some of the prisoners, like the bug-eyed, barely articulate Strogin (John Bliefer) seem to have lost it even before they were captured. But what bothers Allison most isn't his loss of freedom but the fact that he hasn't gotten a letter from his wife (Margaret Lindsay). He can at least expect information about her when their mutual friend Digby (Douglas Fairbanks Jr.) ends up in camp after getting shot down. But Digby is strangely reticent on the subject and soon grows all too eager to escape. We soon learn why, though Allison remains in the dark about the fact that his wife started an affair with Digby almost as soon as Allison went to war. Digby's primary motive for escaping is that he can't bear proximity to the man he cuckolded. So he bolts despite Allison's warnings, seizes a plane from a nearby airfield and flies back to the Allied lines. That same night, a local woman who brought produce to the camp is found raped and murdered just outside the gates, and Digby's abandoned coat is found nearby.

For the Germans, the rape and murder matter more than a prisoner's escape. Under the prevailing laws of war, they have a right to demand that the Allies deliver Digby back to captivity to stand trial for the girl's violation. The commandant wants Allison to undersign the formal demand as proof of everyone's good-faith commitment to justice, but our hero can't imagine Digby doing such a terrible thing. Why do they think Digby did it, anyway? Well, they did find his coat, and it did have letter addressed to him inside. The commandant shows Allison the letters for verification purposes, and now Allison learns the truth about Digby and his wife. You bet your ass he signs that document now. And in the most surreal scene in the picture, the laws of war are observed to the letter. Damned if the British don't hustle Digby back to the front and march him into No Man's Land under a flag of truce. Damned if the Germans don't accept him like a Red Cross package while sharing a quick smoke with the Tommies escorting the prisoner. Then it's back to the war and back to prison for Digby, where his denials of having even seen a girl do him little good. The only thing that saves him from the firing squad is the wretched Strogin's handwritten confession to Allison, punctuated by his hanging himself and topped with a lovely Pre-Code closeup of his bug-eyed strangled face.

The prison still isn't big enough for Allison and Digby, and that means another escape attempt is inevitable. This time, however, it's a mass breakout, the men to storm the airfield and fly out en masse. For the plan to work, someone will have to take control of a machine-gun tower and hold the guards at bay. It's dueling renunciation time as Digby believes himself worthy of death for betraying Allison, while Allison has convinced himself that Digby is his wife's true love and the one who should go home to her. I won't spoil who ends up with the machine-gun, but it ends with a fair amount of carnage and the commandant's salute to an honorable enemy.

All of the picture's violence, apart from the initial escape attempt, is motivated by the passions and jealousies of men. War, by comparison, or at least away from the battlefield, is an almost absurdly orderly affair, always subject to pauses for proper transactions like the delivery of one's own fighting man to the enemy. A POW camp can be just as civilized under the combined influence of Allison and the commandant, until the wild card of Digby and his guilty secret disrupts the decorum. It's as if he triggers the savage impulses of Strogin -- as if Digby's escape and Strogin's murder of the girl were not coincidental. Digby and Allison can't resolve the issue between them without a massive battle and the deaths of who knows how many people. The thought of Allison and Digby fighting each other never really seems to occur to either man; they take their rivalry out on the Germans instead. Gibbs and Chodorov may be saying something very provocative about war here -- or they may not have had a clue about the implications of their story. Either way, Captured! is one of the more peculiar POW movies ever made, setbound for the most part but stylishly so in a big-studio way until the big breakout as hundreds of men swarm across open ground like the release of something fundamentally male. As Allison, Leslie Howard seems to be playing his standard role, while Fairbanks Jr. gives one of his typical edgy, slightly feral performances from the period when he tried harder as an actor. As Strogin, Bliefer lurks at the fringes often enough to remind us of his ticking-bomb status, and his mostly-mute mugging is such that you hardly notice J. Carroll Naish hanging around until he gets more lines late in the picture. You probably don't actually need Margaret Lindsay in the picture, but she's here to nail down the heart interest in some flashbacks. As an ultimate good German, Lukas has little to do but be reasonable when no one else will. His commandant is the warrior as administrator, a well-meaning bureaucrat who hopes to cope with soldiers but can't contain men. So is war hell because it weaponizes male rivalry, or would guys be better off under military discipline as long as that included leaving each other's women alone? Captured! doesn't necessarily offer any answers, but it does raise some interesting questions.
Given that the trailer promises "Ten thousand love-starved men storming the barricades that bar them from the world of women," I now think this film knew quite well what it was saying. Here's the trailer, provided as usual with Warners Pre-Codes by TCM.com