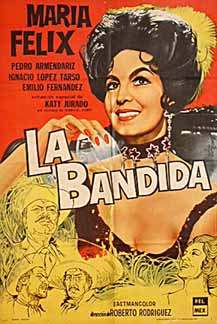 Pedro Armendariz and Emilio Fernandez are probably two of the most recognizable Mexican actors for American movie fans. Armendariz, the "Clark Gable of Mexico," broke into Hollywood in the late 1940s with the patronage of John Ford, acting alongside John Wayne in 3 Godfathers and Fort Apache, and remained busy as a character actor in American films until his cancer-provoked suicide, his last film being From Russia With Love. He continued to work in Mexico regularly throughout this period, and La Bandida is his final Mexican film. Fernandez, "El Indio," is best known to American fans as Mapache, the brutal warlord who employs and is destroyed by The Wild Bunch. Despite a personal history of violence, he was a popular star and director in Mexico for most of his life. Acting alongside these mighty men in Bandida is Katy Jurado, an Academy Award nominee for 1954's Broken Lance and a noteworthy presence in American westerns from High Noon through Pat Garrett and Billy the Kid. All three, as the poster to the left shows quite clearly, are vastly subordinate to the actual star of Roberto Rodriguez's melodrama, yet Maria Felix is a nonentity to American movie fans. Unlike the others, Felix never went north to Hollywood. She was apparently content to reign as a diva of Mexican cinema, and Bandida is very much a diva's vehicle however you slice it. You may feel elegiac watching a moribund Armendariz and a going-on-sixty Fernandez, but the overall impression Bandida makes is as if Ride the High Country had been written by Mae West and directed (on the cheap) by Josef von Sternberg, with the gunfights replaced by cockfights. Yes, "we will speak more of cocks," as Armendariz says in a subtitle, as an already certainly unsubtle picture is made even less so in translation.

We meet Armendariz's Herrera and Fernandez's Gomez in mortal combat. Herrera's a northerner and a Villista, Gomez a southerner and a Zapatista. For some reason they're fighting each other, the two jefes dueling with machetes (the sound effects seem to have been dubbed in years later) when Herrera runs out of ammo until the official army makes them break it up. Threatened briefly with execution for insubordination, both men are paroled and sent home, Gomez to mourn his wife, who died protecting a rooster, Herrera to discover his beloved, Maria la Bandida, in bed with another man. He shoots the man but spares the woman and goes off to sulk. In time, Gomez comes north to pit his fighting cocks against all comers. He resumes his rivalry with Herrera on friendly terms, especially after gunning down a cardsharp whom Herrera had accused of cheating. Herrera is a pretty tense guy, since his neighborhood's one social spot, a brothel, is where La Bandida holds court with her BFF, Jarocha (Jurado). Bandida is the local celebrity, the subject of songs and universal male lust, to Herrera's chagrin. She gradually takes over the place, ready to enforce her will with a broken bottle whenever necessary. She warms up to Gomez, seemingly to stoke Herrera's jealousy. When interlopers feed his fighting cock buckshot to weigh him down, Gomez assumes that the jealous Herrera has cheated him and a gunfight breaks out in the cockpit. Neither mortally wounded, they recover in adjacent beds, Herrera annoyed by Gomez's insistence on having one of his cocks with him in the hospital. Recovered, Herrera resumes his love-hatred of Bandida, their relationship climaxing when he whips her, beds her, and dumps her again. Still, he can't stand the idea of Gomez scoring with her on the rebound, so he challenges his fellow cocksman to a game of Russian Roulette to determine the rights to Bandida. It ends up a draw when the gun inexplicably fails to fire when Gomez has to take the last shot. The implausibility of this drives Herrera's faithful retainer (and Jarocha's boyfriend) Anselmo (Ignacio Lopez Tarso) out of his wits, literally, after he starts compulsively playing with the weapon. Mercifully, a revolution breaks out again, but that won't stop that "pair of centaurs," as one singer calls them, from staging one more showdown with guns that actually fire....

Armendariz and Fernandez's macho rivalry often seems but a sideshow to Maria Felix's fashion show and her emotive showcases. This shabby vehicle -- it seems to have been tampered with in the preservation somewhat -- is a peon's fantasy of living large in Mexico's equivalent of Wild West days, a woman's fantasy specifically of tough guys battling over the beautiful temptress. The problem is that Felix, like her two male leads, is past her prime, pushing 50 when the film came out. Her options look promising if you like your heroes beefy and burly, but it really seems like everyone should be at least a generation younger for this story to work as something other than camp. For what it's worth, Fernandez comes off better as the more calm and reasonable of the two heroes, while Armendariz is practically apoplectic, raging in one scene, braying like a jackass in another. I've liked Armendariz in most of his American films that I've seen, but he's pretty bad here. I blame that partly on his illness and mainly on bad direction from Rodriguez, who brings little style to this overlit, zoom-happy picture. In everyone's defense, La Bandida does seem designed to be an over-the-top picture, the kind where a singer bursts into the cockpit before one of the big fights to sing a ballad in honor of the title character, who basks in the adulation. It's all hokey as heck and should have seemed primitive thirty or forty years earlier, but even its camp value will be compromised for some viewers by the cockfighting scenes, which seem as important to this movie as the wrestling bits are in El Santo's films. I recorded this off TCM last night expecting some classic of Mexican cinema, though the 1.5 star cable-guide rating should have warned me otherwise. It proved a disappoint I can only laugh off slightly, since all the stars -- I give Felix the benefit of the doubt -- were capable of better, and Armendariz should have gotten a better sendoff in his homeland. Still, some people will have a good time laughing at this -- you can probably decide for yourself from my synopsis -- and to them I recommend it.
Posted by Samuel Wilson at 11:45 PM