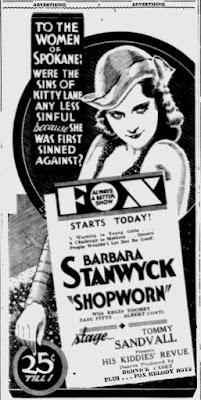 Nick Grinde's Columbia picture is an almost perfect instance of a movie condemning itself in its very title. Shopworn? Let me count the ways. Barbara Stanwyck plays Kitty Lane, a good little waitress in a college-town diner who spends her time fending off the students until she falls for medical student David Livingstone (a stiff Regis Toomey) -- Dr. Livingstone, I presume? Kitty aspires to David's intellectual level, memorizing dictionary pages in order to provide edifying conversation. But David's high-society mother takes Kitty for a gold-digger. She sends her crony the local judge to offer Kitty $5,000 in get-out-of-town money, telling her that David's already left town, the mother having feigned a stroke -- the kind that requires an Atlantic crossing for specialist care -- to distract the lad. Kitty nobly throws the cash in the judge's face. When the judge tries the other direction, telling David that Kitty took the money and ran, Young Dr. Livingstone socks him one. But the judge is a power in the town, and he manages to frame Kitty on a public morals charge that earns her a stint in a home for "the Reformation of Women." This reformation consists of scrubbing floors on your knees until you pass out, and little else that we see. Freed at last, Kitty loses her job, though her co-worker Dot the dishwasher (Zasu Pitts) remains a pal, and David is long gone. What's a girl to do? Kitty fatefully spies a "Follies" poster and shazam! -- if you'll excuse the anachronism -- five years later she is an international star, with her own variety show and Dot playing her maid, and a godsend to the gossip columns. Her latest tour comes to the old college town, where she plans to show up Dave, but the old sparks rekindle. Once more Mom struggles to put out the flames, going so far as to pull a gun on Kitty to make her give Dave up once and for all. But the poor dear is just afraid. She loves her boy and doesn't want anything bad to happen to him. Come to think of it, Kitty feels the same way, so when Dave comes knocking, she hides Mrs. L in a closet and gives her man the big brush-off. He's just about to storm off for good when the old biddy bursts out to dissuade him. Having seen Kitty lie about not loving him just for her sake, she realizes at last that, notwithstanding the last five years, Kitty's been a good girl all along. And they all lived happily ever after. 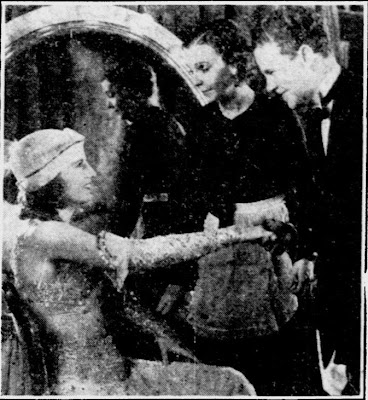 Barbara Stanwyck would seem to have had as good a track record as any Pre-Code star, shuttling between Columbia assignments for Frank Capra and high-powered stuff like Night Nurse and Baby Face for Warners. But she couldn't work for Capra all the time, and given her rapid rise to stardom both Columbia and Warners stuffed her into as many vehicles as possible. The more that Turner Classic Movies and on-demand DVD stores mine the depths of both studios' archives, the lower Stanwyck's hit average will sink, though it shouldn't sink too far. TCM thought it had something to show off in Shopworn, playing it in prime time to open a four-film marathon of Stanwyck Pre-Codes, but the film is hopeless. Toomey is an inert male lead; it would take alchemy, not chemistry, for sparks to strike between him and Stanwyck. But a more charismatic actor probably could not have saved the, well, shopworn scenario (concocted by Capra cohorts Jo Swerling and Robert Riskin) and its catalogue of corny climaxes. Fortunately, Hollywood knew how to be brief in those days, so you lose little more than an hour of your life sitting through Shopworn. Movie fans probably should find a film like it to watch sometime, if only to remind themselves that not everything in the Pre-Code era was scintillating, relevant or even interesting. Content and context can redeem a lot of Pre-Code crap, but not every time. For a film about scandal, Shopworn talks a good game -- I close in a generous mood -- but doesn't walk the walk. With Stanwyck there to walk it for them, that should prove what a stinker Shopworn is.

Bonus material: An enterprising exhibitor in Regina, Saskatchewan, convinced local merchants to stage tie-in "Shopworn" sales to promote the movie. Here's  a page worth of publicity from one of the Regina newspapers. 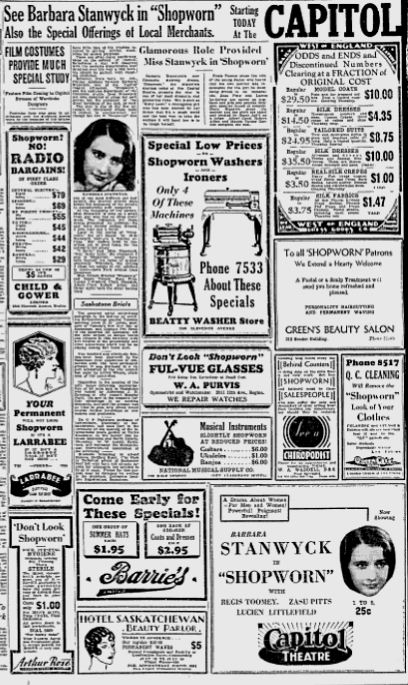 Posted by Samuel Wilson at 7:44 PM