Spoiler-free summary: Shane Black's superhero picture is a stand-alone sequel that surprisingly does nothing to begin setting up the next Avengers picture, but that's not really a problem for an entertainingly twisty picture that takes an important step forward in portraying superhero action on film. Iron Man Three (the numeral is spelled out during the end credits) is a self-aware exercise in cliches and sometimes too cute about it for its own good, but it gets by on the charisma of its stars and versatile work by Ben Kingsley. Strangely, the picture at times seems to have more to say about The Dark Knight Rises than it does about The Avengers, but more about that below, with spoilers for the unwary... 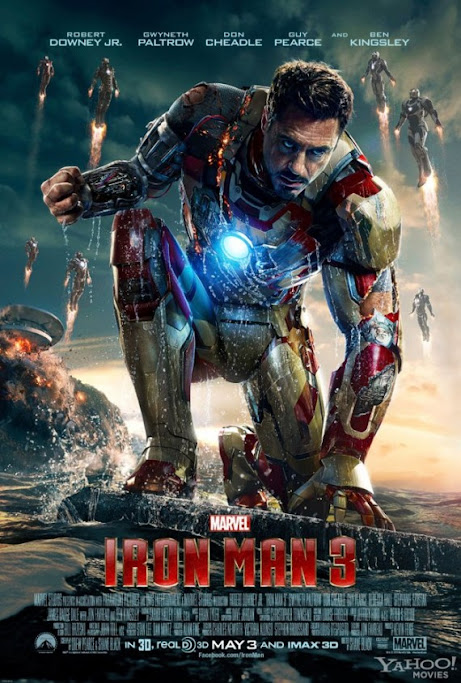 It was not cause for confidence to learn that the Iron Man franchise had been handed over -- former director Jon Favreau remains in front of the camera as Tony Stark's henchman Happy Hogan -- to the writer of Last Action Hero, but in the "what have you done for us lately" department Shane Black is better known these days, at least in movie circles, as the auteur of the 2005 film Kiss Kiss Bang Bang. I haven't seen that picture but it's well regarded by many and a milestone in the comeback of Robert Downey Jr. A real or presumed affinity between actor and auteur got Black the Iron Man gig, and at a bare minimum he's improved on Favreau's second picture. Iron Man 2 was really little more than half a movie, and nearly worthless after the fight scene at the Monte Carlo Grand Prix. It suffered from lackluster villains, though Mickey Rourke started strong and projected a novel sort of menace in the race track scene. Its failure of imagination came at the end, when someone decided that Rourke couldn't remain a credible threat unless he got into a suit of armor. There were too many interchangeable armored entities flying about to no real effect, and the new film had me worried when toward the end Tony Stark summons all his old suits by remote control to form a flying army of armor. The Iron Man series would be a dead end if it couldn't be about anything but armor; it'd be missing one of the key elements of superhero comics, something that was there in the Grand Prix fight. The frisson of that sequence came from the image of a shirtless burly man holding his own with Iron Man because he'd made himself superhuman. Shane Black and the Marvel Studio team must have realized this, because they dispelled my doubt by actually climaxing the new film with a fight between Iron Man with a shirtless, albeit more buff antagonist more superhuman than Mickey Rourke -- yet more human than the Incredible Hulk. This is a leap forward: enemies whose powers don't come from weapons or magic. We see that in comic books all the time, but it seems as if movie writers have had a hard time indulging in this most primal fantasy. Iron Man Three lets it rip, and that's all to the good.


The movie is something different from what's been advertised, but that doesn't become apparent until late. Yes, America is under siege from terrorists led by a bizarre individual called the Mandarin, whose logo seems to tie him to the Ten Rings organization that kidnapped Tony Stark in the first film, though no one seems to notice the symbolism. This Mandarin (Kingsley) cuts an unlikely figure: garbed like an ancient Chinese warrior but obviously not Oriental, with a drawling voice "like a Baptist preacher." He hijacks all TV networks to take credit for the attacks and rant about the evils of America and the current President (William Sadler) in particular. Kingsley's performance is deliberately preposterous and in head-slapping retrospect you wonder why anyone took this menace seriously -- you wonder why you did. The answer is: this is a superhero movie and you're supposed to suspend disbelief no matter how preposterous the villains look or sound. In this case that proves a mistake, but when you realize that the joke's on you it actually makes the film more likable, and Kingsley has a lot to do with that by boldly making his character even more preposterous. But if these developments disappoint anyone, there are plenty more menaces and potential menaces to think about, most prominently the disgruntled nerd turned super-entrepreneur Aldrich Killian (Guy Pearce), whose Advanced Idea Mechanics (AIM) is a long-established evil entity in the Marvel Universe. More immediately, there are people running around burning with malignant energy. Some of them can channel it into dangerous power or raw strength; others just blow up, taking innocent people with them. Who's pulling their strings: the Mandarin, Killian, or scientist Maya Hansen (Rebecca Hall), who nurses her own grudge against Stark after a one-night stand on New Year's Eve 1999?


It becomes personal for Tony Stark after one of these human bombs nearly blows up Happy Hogan at Grauman's Chinese Theater. As usual, Stark has issues above and beyond his irreducible arrogance, but the film is least convincing when it claims that Tony is suffering from anxiety attacks following his ordeal in The Avengers. There's little point to these beyond the implication that Tony needs to take a break. But since he somehow can't (or won't) call on SHIELD or any of his Avengers buddies to take care of things he keeps driving himself, as always endangering his relationship with Pepper Potts (Gwyneth Paltrow), not to mention her life more than once. In the comics, Pepper illustrates the tendency toward excluding "normal" people from heroes' intimate circles. She has become an armored superhero in her own right and the new movie lurches the character in that direction while implying that her episode of power is only temporary. We will see, but with or without powers Paltrow remains a welcome presence in these pictures and arguably the best romantic-interest performer in superhero movies to date. Less welcome was the subplot that sends Tony to Tennessee to bond with a cutely precocious little boy (Ty Simpkins) while playing detective and repairing his armor. There's a smug snarkiness to the scenes Downey shares with Simpkins, which seem meant to mock the "fathers and sons" preoccupations of so many movies. Those preoccupations certainly deserve mockery but do you want to introduce a kid as an important character just to do this? It doesn't really hurt the picture, but you do wonder whether it was worth doing.


As I wrote on top, Iron Man Three does nothing, not even in the now-traditional post-credits bit, to start the ball rolling toward Avengers 2. I now suspect that we won't see any real buildup until next year's Guardians of the Galaxy movie, while the Thor and Captain America franchises attend to their own concerns. As I expected, we do get a welcome appearance by another Avengers cast member in the post-credit, along with a punch-line to the narcissistic narration with which Downey has punctuated the picture. If you didn't stay for that, however, you might get the impression that you had seen the last Iron Man movie. At the very least, it looks like Tony is going to take that break, but in doing so there are echoes of Christopher Nolan's Batman movies that don't seem coincidental. It's so blatant -- or remarkably coincidental -- that Tony even has a "Clean Slate" protocol that he activates to signal a break from his past, though what actually happens is more reminiscent of the self-destruction of Bruce Wayne's super-surveillance network from The Dark Knight. You might shrug it off on the assumption that superhero stories are inevitably derivative and repetitive, but when the film closes with Tony chucking his arc reactor into the ocean and driving away for parts unknown, yet affirming once more that "I am Iron Man," you might join me in perceiving an implicit critique of Nolan's presumption that he can make Bruce Wayne stop being Batman. It certainly is an odd note on which to end the first of Marvel's "second wave" of movies, but it's also a good thing that each individual movie franchise can retain a degree of thematic autonomy. Tony Stark may be tired, but the Iron Man series isn't, just yet.
Posted by Samuel Wilson at 10:15 PM