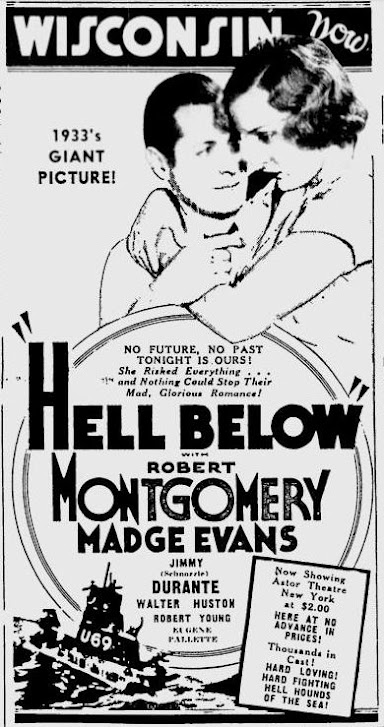 Buster Keaton wasn't the only filmmaker to suffer from Metro-Goldwyn-Mayer's fanatic belief in the stardom of Jimmy (Schnozzle) Durante. Not only did the studio insert Durante into Keaton's films to make them funnier; M-G-M also felt that their dramatic pictures needed to be funnier as well. That's why, in the middle of a rather grim drama of submarine warfare in the Mediterranean, Schnozzle boxes a kangaroo. The kangaroo's winning before Durante breaks up the bout by attacking a toothy British spectator he's dubbed "the Elk." Jimmy fancies himself a dentist and has wanted a sample of this man's dentures since early in the picture. There are many opportunities to kill Durante in the film, but he makes it through intact. Sterling Holloway they can kill. The future Winnie the Pooh gets his leg crushed by a stray torpedo, then finds himself locked in a room filling rapidly with chlorine gas. With limited oxygen in their damaged sub, his crewmates have to watch him die rather than flood their own compartment with the stuff. Robert Young they can kill. He's sent to inspect a torpedoed and abandoned German warship but is himself abandoned when the sub has to submerge to escape aerial bombardment. He's strafed by fighters rather than bombed, however. Robert Montgomery they can kill -- and he's the star of the movie! The future real-life naval officer has to atone twice over to Walter Huston as his commanding officer: once for an insubordinately rash attempt to avenge Young or rescue a man who is certainly dead that results in the crisis that gets poor Holloway killed; then for trying to make time with Huston's daughter (Madge Evans), who happens to be married to a wounded officer. For such presumption, our hero turns a dangerous operation into a personal suicide mission. Hell Below is, in fact, an exceptionally grim war movie, and that only makes Durante's survival more galling. Schnozzle actually shares comedy-relief chores with Eugene Pallette, but the latter, playing an engineer, actually contributes practically to the dramatic moments, while Jimmy, playing a cook nicknamed Ptomaine, only coughs a little while keeping up with the wisecracks. For those who want to see Durante get his, I refer you to The Wet Parade, where his character actually dies, or Meet the Baron, where the Three Stooges beat him up.

If you can overlook Durante, Hell Below boasts some impressive action at sea, under water and on board an actual submarine. There's indisputable vitality in scenes shot through a periscope on the deck of a just-surfaced sub, and there's plenty of stuff blowing up to keep war fans entertained. There's also a bombardment of an Italian city that appears to borrow destruction footage from the future-war prophecy picture Men Must Fight, which premiered just a few months earlier. Hell Below as we see it now seems to have been edited for Code-Enforcement re-release. I don't know if entire scenes were eliminated -- there's still a lot of shore-leave comedy left, not to mention the kangaroo fight -- but some lines of dialogue have been obviously muted. You'd think I might be grateful for a moment when Durante moves his lips but no noise is heard, but I can't help wondering what he might have said that had to be silenced when they let him talk the rest of the time. Not even counting Durante, the movie must have struck audiences as something of a bummer, given Montgomery's fate. When a character screws up as his does, and has a romantic interest, the idea usually is to let him redeem himself and earn the girl's love. Here, instead, the pathos of renunciation kicks in. Hell Below is no chick flick in which Evans's hubby will conveniently expire to clear the way for our hero. Rather, hubby's going in for surgery that will restore him to full health and manhood, leaving Montgomery with no hope of making it with Evans. His course is one of atonement rather than redemption, and to that extent the picture may have impressed some viewers as more hard-boiled than the common wartime romance. But if our hero's sacrifice was meant to be stirring, Metro may have misjudged the time and the audience. Hell Below was made at a time of deep cynicism about the Great War and war in general, and in such an environment Montgomery's demise may have seemed less like a patriotic apotheosis and more like a pointless waste of life. The abruptness of the ending, with no one to mourn or honor our hero, is like a slap in the face, regardless of the message the slap is meant to convey. Had Hollywood been more committed to war at the time, the movie might not have ended quite the same way. Maybe that's why Durante's character survives. Had he been killed, people might get the idea that war is a good thing.
Posted by Samuel Wilson at 12:22 AM