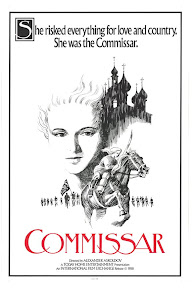 The Soviet Union was a censorious, repressive society, but its leaders and bureaucrats had a curious attitude toward film. Rather than destroy unacceptable movies, the U.S.S.R. tended to shelve them, presumably indefinitely. Even Stalin shelved Eisenstein's Ivan the Terrible Part II rather than burn it, and under Khrushchev it saw the light of day. Likewise, the ambitious debut film of director Aleksandr Askoldov was shelved by the Brezhnev regime, ruining Askoldov's career, only to emerge in the days of Gorbachev. It was acclaimed then, but Askoldov, then still only in his fifties, appears never to have resumed his career. One wonders what the censors objected to. It may have been the decision to adapt a story by Vasili Grossman, a writer presumably on the outs with the government since his novel Life and Fate had been suppressed a few years earlier. But if that were the case, Askoldov shouldn't have gotten a green light at all. The real issue seems to have been form rather than content. Askoldov was one of many Soviet directors butting against the aesthetic limits of "socialist realism" in cinema. Like many an ambitious novice, he seems willing to try anything with the camera. That experimentation may have been off-putting to the extent that it expressed directorial individualism rather than an official vision of the civil war that followed the October Revolution. Commissar occasionally spills over from socialist realism into magical realism in a manner that can be stunning to the casual viewer but disconcerting if not offensive to Soviet aesthetic regulators. So-called totalitarian regimes seemed to distrust artistic experimentation, believing that all art had a propaganda function and should be comprehensible by the lowest common denominator. Yet I don't think viewers would have trouble getting Commissar. So some have speculated that the KGB objected to the film's supposed feminism, since the title character is a woman, or to its sympathetic treatment of Jews, though Askoldov's attitude may not be as positive as that speculation implies.  Maybe there just wasn't enough heroic march music; totalitarians dig that sort of thing.

The offending film focuses on Klavdia Vavilova (Nonna Mordyukova), a Red Army officer who arrives in a freshly-taken town and is quartered with the Magazannik family. She's left behind as unfit for duty because she's in the last stage of pregnancy. Yefim Magazannik (Rolan Bykov) is one of those "life-affirming" types, the kind who dances barefoot in his yard as some sort of prayer to God. He kvetches at having to give up his bedroom to the commissar, but he and his family prove friendly, the wife especially showing empathy, having five kids herself, with the pregnant officer. The boys in the family are rambunctious, and the way they're presented may be part of the problem the censors had with the film. For one thing, they like to play at war, pretending to cajole their sister's doll from a hiding place only to torture and execute it. Later, they treat the sister herself with some of the same childish brutality, calling her a "Yid" for extra measure. The offensive insinuation may have been that the Red Army's conduct may have inspired the boys' cruelty. They may have been offensive in another way in one scene when their mother is bathing them, only to be interrupted by troops passing through town. The curious kids rush out to watch, and Askoldov gives us one shot of their three naked penises through the passing wagons that could well have convinced Soviet censors that he was some kind of a pervert and could well give American viewers a little bit of the creeps. But the director may simply have meant them as symbols of innocence; a lot depends on the eye of the beholder.

For a while you think you know the direction the film's going. Klavdia is slowly domesticated, doing her share of household chores and clearly caring for her newborn. But the film takes a late turn when the approaching counterrevolutionary "White" army shells the town. Klavdia and the Magazanniks take shelter in a basement. The kids are panicking and crying, but Yefim calms them and entertains them by launching into one of his Tevye/Zorba-esque dances. In what becomes a dreamlike montage, he, his wife and the kids all dance past Klavdia in the darkness, urging her to join them. Then, in the film's most startling coup, the montage turns into a prophetic vision. Klavdia now sees Yefim doing a more subdued, submissive form of his dance as he and his family, all wearing Stars of David on their garments, are herded into a concentration camp as veteran inmates watch in their iconic striped pyjamas. Everything's there but the Nazi regalia -- though it can't be the 1940s because Yefim's kids are still kids. From there there's one more anxious episode as Klavdia rips apart the boarding covering a door so she can shelter her baby (temporarily left on a sidewalk) from an advancing army, and then the commissar's fate is sealed. She leaves the baby with the Magazanniks to raise as she hastily rejoins the Red Army for what looks like an unpromisingly undermanned assault on the enemy with a minimal orchestration of the Internationale playing as a coda.

So for all Askoldov's alleged philo-Semitism he (and presumably Grossman before him) seems to be saying that for all Yefim's quaint charm his attitude of faithful resignation is simply inadequate to the moment in history. It is not enough for Klavdia to put her faith in a higher power; she can't wait for things to happen, but must rejoin the struggle, even if that means sacrificing her motherhood, not to mention her life. That would seem to make her an exemplary Bolshevik and an ideal hero for a Soviet film. But Commissar seems to have been judged much as a Hollywood film would be under the studio system: the ending with its stark hint of sacrifice for its own sake isn't happy or affirmative enough to satisfy the audience the bosses presumes exist, or wants to exist. In short, a Soviet cultural bureaucrat was just as likely as a Hollywood studio bureaucrat to be a moron.

Visually, Commissar swings for the seats on every pitch, and Askoldov occasionally hits one out of the park. Apart from that stunning flash-forward to the Holocaust, the film's most arresting moment comes when Klavdia flashes back during labor to her wartime adventures and envisions the slaughter of her comrades. This scene climaxes with a host of saddled but riderless horses charging across a bridge and through the countryside, eventually accompanied by an eerie murmur of human voices. It left me wondering whether the scene had influenced Steven Spielberg's more restrained employment of riderless steeds in War Horse. Regardless, Askoldov's imagery has at least as much power as anything Spielberg achieved in his new film. Commissar is often self-indulgent but never in an annoying or pretentious way. Askoldov's show-offery doesn't distract from the forceful yet ambiguous point he wants to make about war. If it was too ambiguous for a 1967 commissar to comprehend, or too forceful for him to accept, those are badges of honor Askoldov and his move can wear with pride today.
Posted by Samuel Wilson at 9:09 PM

Perhaps the reason it was shelved was because it didn't portray war as a glorious thing, but rather a violent, brutal thing wherein people become corpses, rather than heroes. This being the height of the cold war and all.

This story was based during the civil war between the Reds vs. the Whites (circa 1919) long before any cold war or any temperature regulated the warring of men. Red Bolsheviks against the White czarist loyalists all of which led to their down fall defeat by Lenin led factions, which became the Communist Party, and Stalin's hammering down an iron fist, meanest man ever rule. The fact that a director could even conceive a story so humane that it cut through military loyalties, Jewish anti-semitism, and upholds motherhood as the pentacle of any society as true essence is a tribute to iconic efforts of one brave director. Being banned and shelved for 20 plus years in its native land it was ironically lauded worldwide. Finally a new audience worldwide gets their chance to view this wunderkind of cinematic "breach of policy" to tell one of the most enduring life stories of cross cultural, basic humanism reaching out in innocence, purity, and naivety to wonderful glory. Beautifully shot in black and white action shots cinematography, we discover a real special treat. Find, embark, cherish, share, spread the word. This is a remarkable achievement of celluloid glory that now can withstand the cruel onslaught and indignity regardless of any past military subversion.