Spencer Tracy paid his dues for five years in Hollywood before becoming a real movie star. He served that time under contract to Fox Film, which had little idea of what to do with him. He usually starred, but his starring roles were usually unmemorable, with a few exceptions that people have probably read about more than they've seen. Like many a contract player, he got loaned to other studios. Warner Bros. wanted him for Michael Curtiz's film version of a best-selling memoir by the warden of Sing Sing prison, partly because James Cagney was unavailable, but also most likely because Tracy had made his name on Broadway playing a tough convict in the play The Last Mile. So 20,000 Years in Sing Sing finds Tracy at a midpoint between his Broadway fame and his real movie breakthrough, since some of his performance for Curtiz anticipates his role in his first hit for M-G-M, Fritz Lang's Fury.

It seems unlikely that the screenplay was based on actual episodes from Lewis E. Lawes's memoir, though the story presumably exploits some of Lawes's controversial policies. Lawes himself is fictionalized into a Paul Long (Arthur Byron), who takes special interest in one of his new prisoners, Tommy Connors (Tracy), after Joe Finn (Louis Calhern), a "deputy boss" for the local political machine urges Long to make things easy for Connors, who has unexplained political connections. The incorruptible Long throws Finn out and decides to make an example of Connors instead. Connors takes his pull for granted until he's assigned a ridiculously oversized uniform and punches an unsympathetic guard. Long orders him sent to solitary until he accepts his uniform, then gets a better idea. He has the guards tell Connors that he can go without the uniform if he wants, but he wont get another. That means he has to parade around everywhere in his equally oversized union suit -- one con says it looks like he has a stash of tools in the bottom of his drawers. Connors remains defiant until he's assigned to work in the icehouse. He then reports to Long in the uniform he tore up, but tells the warden he won't work and never has. Long's answer is to keep him in solitary until he begs to work. After three months -- it seems like three years to him -- Connors cracks and is soon breaking rocks with gusto. 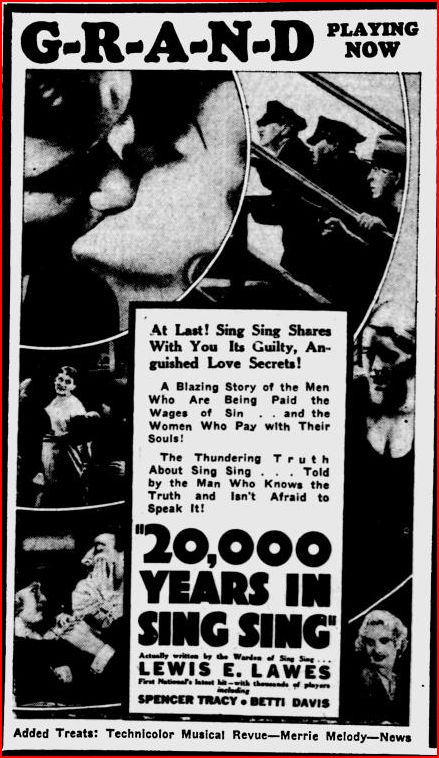 Cons at Sing Sing are given intelligence tests to determine their regular work details. Connors proves nearly as bright as Bud Saunders (Lyle Talbot), a genius criminal with Phi Beta Kappa credentials if not a criminal genius, and both get easy details, while Hype (Warren Hymer) proves so stupid that he's only fit for lavatory detail, Connors's smarts come through again when his girlfriend Fay (Bette Davis) explains her harebrained scheme to seduce Joe Finn into working for Tommy's early release. Tommy warns her that she's playing with fire, since any hint she gives Joe will only give Finn reason to make sure Tommy stays in jail, or never comes out. Ironically, however, it's not his brains but his criminal superstition that stops him from joining Saunders's escape scheme, for which the genius has secretly built a lockpicking machine and assembled a working pistol.Connors meant to join him and Hype, but the escape takes place on a Saturday, Tommy's unlucky day. Not so unlucky this time; while Tommy sits in his cell, Hype and another con are caught when the lockpicker malfunctions, and Saunders jumps to his death after killing two guards for whom his accomplices will burn in the electric chair.

Even though Connors retains his bluster and tells the warden the truth about superstition alone preventing his escape, Long becomes convinced that Tommy's intelligence and honesty make him trustworthy. The test comes when a telegram reports that Fay has been gravely injured in a car accident. Heretofore Long has been shown breaking the will of his charges. Now we see the other side of his penology, the honor system that entitles trustworthy inmates to leave prison for short unsupervised trips. Long arranges for Tommy to see Fay, who's being treated at home, and Tommy promises to return, even if it should mean the electric chair. All seems well, but Tommy notices that it's another Saturday. In the city, trailed by a suddenly suspicious NYC cop who'd brought him to Sing Sing initially, Tommy visits Fay and figures out the truth. She'd foolishly kept on trying to butter up Joe Finn, but drew the line too late and ended up either jumping or getting thrown from a moving car. Joe conveniently arrives as Tommy hides and the cop watches, to offer Fay hush money. Tommy confronts him and fights him. Just as Joe raises a chair to brain Tommy, Fay shoots him from her bed. Both realize that Tommy will be blamed, and the cop is breaking the door down, so Fay gives Tommy the hush money and urges him out by the fire escape.

Of course the cops don't believe Fay's story and the headlines scream that a furloughed criminal has committed murder. The news media crucifies Warden Long, who drafts a resignation letter and has just begun to sign it when Tommy, last seen in a safe house waiting to board a tramp steamer, appears to prove his word and vindicate the warden. This is the part that anticipates Fury, where the big question is whether and when the Tracy character will step up, do the right thing and save men from death for a murder they didn't commit -- Tracy's. But Fury's is a happy ending compared to 20,000 Years. Tommy Connors confesses to the shooting of Joe Finn, and Fay is incapable, due to questionable credibility, of convincing jurors of the truth. That means death for Tommy -- and in the unflinching fashion Warner Bros was capable of almost uniquely among Pre-Code studios, there will be no pardon or reprieve. Instead, Tommy convinces Fay that telling the truth won't help them, since they would still be separated for decades if Tommy serves his original term and Fay goes to jail. "We can never be together" he explains, combining an older pathos of renunciation with the Warner hard-boiled manner. 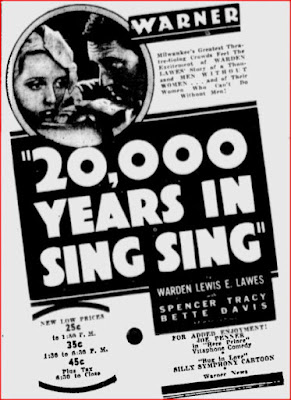 The real Warden Lawes seems like a real self-promoter -- note how he's billed above the stars of the picture. He welcomed Curtiz to Sing Sing to give many scenes documentary authenticity. The director's dynamic framing of action and sharp, shadowy cinematography by Barney McGill ensure a smooth fit between location and studio scenes. Tracy and Davis, in their only screen pairing (before it would have been a major event) have convincing chemistry, and the Warner players are their usual stalwart selves. This could be Arthur Byron's best ever showcase; he holds his own with Tracy every time and his understated authority grounds a sometimes questionable storyline. Lawes/Long is an interesting movie subject at a moment when many Americans seriously considered the necessity of dictatorship. Many of the movie warden's comments are double-edged, especially his assertion that only in prison, under his supervision, are all men truly equal. The warden might and probably would be handled differently in other eras, but the film we have reflects the Pre-Code era's paradoxical longing for authority in a way that may make it uncomfortable viewing today. But without reading politics into it, it remains a brisk, forceful film and an early hint of what Spencer Tracy was capable of and would achieve later.
Here's what looks (or sounds) like a British trailer for the picture, uploaded by omemeister.

Posted by Samuel Wilson at 9:35 PM

I enjoyed your excellent review here Samuel, but alas I have not yet seen this particular pre-coder, though I did see Tracy's ME AND MY GAL, which also released in 1932, though I read that it was a major financial flop. I also read that Davis idolized Tracy and that they both were saddened years later than they couldn't team up again until they worked on a radio transcription of DARK VICTORY. As you note the big Tracy film of this period came four years later with FURY. Anyway 20,000 YEARS is also interesting for Curtiz's direction.